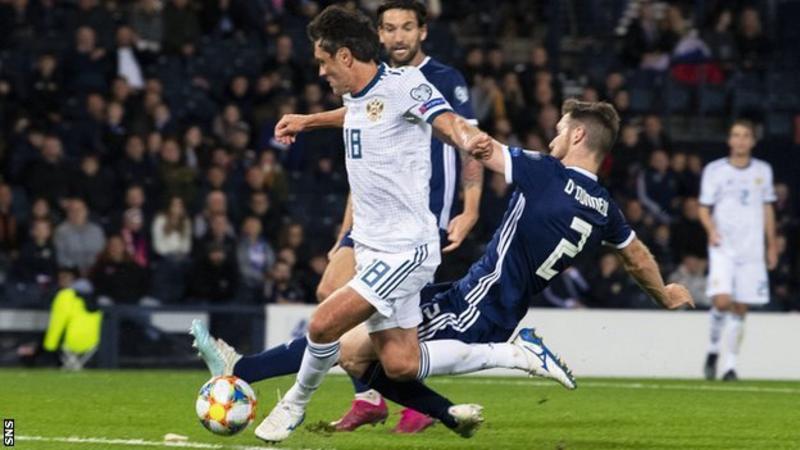 Scotland hopes of earning automatic qualification for Euro 2020 dangle by a thread after Russia came from behind to win at Hampden.

Scotland sit six points adrift of the Russians in fourth with five games to play and the top two qualifying from the group. They host Belgium, the top ranked team in the world, in Glasgow on Monday.

Barring an unlikely sequence of results, Scotland’s qualification hopes will now rest on the Nations League play-offs, with a semi-final place already secured.

This was a first competitive home defeat since then-world champions Germany triumphed 3-2 four years ago. After a bright start, Scotland faded badly and could have lost more heavily, with the Russians hitting the woodwork twice and having an effort hacked off the line. 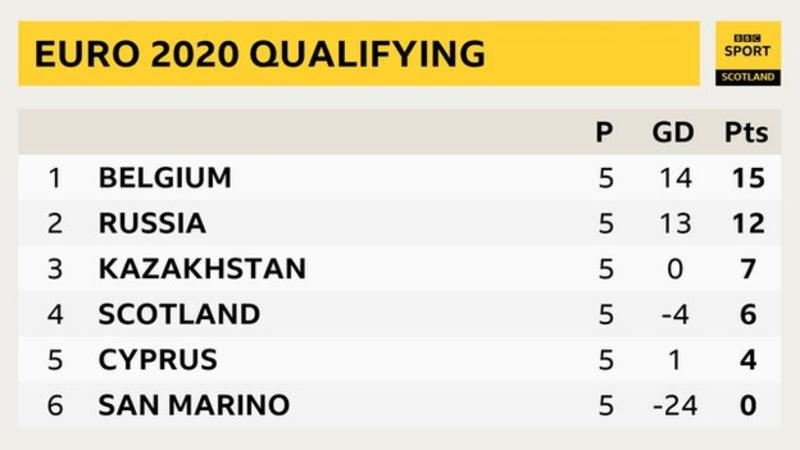 In the last reckoning, they didn’t need that third. Two did the job. Two was enough to effectively kill off any hope Scotland may have had of getting in the shake-up in this group. After the early boon of goal, Scotland were thoroughly outplayed and outclassed.

Briefly, there was hope. Given the plague that descended on Scotland’s centre-halves – four of them going down injured in the build-up to this critical qualifier – a debut was given to Leeds United captain Liam Cooper.

At the other end, Clarke went with Oli McBurnie, a player who turned with the intensity of a man who had a whole lot to prove, which is what exactly what he is, regardless of the eye-watering sum that Sheffield United splashed out for him in the summer.

McBurnie had looked leaden and unthreatening in his previous appearances for his country, but he played a big part in what was a quick start by Scotland. Even before the opening goal, they’d caused Russia some bother, O’Donnell hooking an effort on goal from close range only for Guilherme to get his body in the way to block it.

The goal came in the 11th minute and, though Hampden had vast unoccupied sections, the place still made a fair old racket when McGinn scored. Unsurprisingly it all started with a delivery from the left from Ryan Fraser, his cross being spilled by Guilherme and falling to McGinn, who took full advantage of a gift of a chance.

Guilherme was undoubtedly unnerved by McBurnie’s presence when the ball was in the air from Fraser, the striker failing to make contact but succeeding in distracting the goalkeeper. McBurnie looked hungry and effective in those early minutes.

It was a bright and encouraging start from the Scots, but as the half wore on the more Russia came into it. They were helped by a growing hesitancy and anxiety from the home team. That accuracy and energy they had early on soon evaporated. They couldn’t keep the ball, couldn’t bring any composure to their play. Misplaced pass followed misplaced pass. Trouble was on its way.

It arrived when Scotland once again gave away possession and put pressure on themselves. To add to the error count, in attempting to clear from Aleksandr Golovin, Robertson inadvertently helped it on to Dzyuba. The big striker with the prolific record had the time and space he needed to slam his shot past David Marshall.

It was his 21st goal in 37 games for his country. What Scotland would give for a goal machine like the Zenit lighthouse.

Russia took total control of it after that, helped along their merry way by Scotland’s desperate inability to hold on to the ball. The number of times they lost it needlessly and sent Russia running at them was remarkable.

Early in the second half they really started to pepper Scotland’s goal. Charlie Mulgrew had to charge down a piledriver from Golovin. Two minutes later, Golovin broke free but sliced his shot wide. Scotland’s wastefulness wasn’t just asking to be punished, it was practically begging for it.

On the hour, they got what was coming. This time it was Fraser who ceded possession. Aleksei Ionov picked it up, played a gorgeous ball in behind Cooper to Golovin, who squared it towards the veteran Yuri Zhirkov. The Russian got the first touch, but O’Donnell sliding in an attempt to avert danger, got the last, fateful touch.

Whoever is credited with the goal hardly matters. Russia had the lead and they never really looked like giving it up despite a late flurry by the Scots.

The only wonder was that they didn’t add to it. Mario Fernandes forced a save from Marshall, Magomed Ozdoev’s deflected shot hit a post, Zhirkov’s effort had to be pushed away by the Scotland goalkeeper in another Russian wave.

Scotland pushed hard for an equaliser but didn’t get it and didn’t deserve to get it together. Belgium next on Monday. Life doesn’t get any easier for Clarke and his players.

Man of the match – Aleksandr Golovin

Golovin ran amok. He was on a different level to anybody in blue, buzzing about, picking up loose balls and using his intelligence and vision to cause no end of terror. A world-class player.

Attempt missed. Dimitri Barinov (Russia) right footed shot from outside the box is high and wide to the right following a corner.

Liam Cooper (Scotland) wins a free kick in the attacking half.

Oliver McBurnie (Scotland) wins a free kick in the defensive half.

Oliver McBurnie (Scotland) wins a free kick in the defensive half.

Guilherme (Russia) wins a free kick in the defensive half.

Attempt blocked. Aleksandr Erokhin (Russia) right footed shot from the centre of the box is blocked. Assisted by Artem Dzyuba.

Attempt blocked. Callum McGregor (Scotland) left footed shot from the centre of the box is blocked.

Attempt saved. Matt Phillips (Scotland) left footed shot from very close range is saved in the centre of the goal.

Guilherme (Russia) wins a free kick in the defensive half.

Attempt blocked. Callum McGregor (Scotland) right footed shot from the centre of the box is blocked.

Dimitri Barinov (Russia) wins a free kick in the defensive half.

Ryan Christie (Scotland) wins a free kick in the attacking half.

Attempt missed. Liam Cooper (Scotland) header from the centre of the box is just a bit too high. Assisted by Ryan Fraser with a cross following a set piece situation.

Attempt missed. Kenny McLean (Scotland) left footed shot from outside the box is too high.

Attempt missed. Scott McTominay (Scotland) right footed shot from outside the box misses to the left. Assisted by Ryan Christie.

Attempt saved. Yuri Zhirkov (Russia) left footed shot from the left side of the box is saved in the bottom right corner. Assisted by Aleksandr Golovin.

Attempt missed. Charlie Mulgrew (Scotland) left footed shot from outside the box is close, but misses the top left corner from a direct free kick.

Dimitri Barinov (Russia) is shown the yellow card for a bad foul.

Ryan Fraser (Scotland) wins a free kick in the attacking half.

Kenny McLean (Scotland) is shown the yellow card for a bad foul.