Shameful for Palaszczuk to consider Tokyo trip for Olympic bid

In my 46 years plus tax, never before this week have I felt anything less than absolute pride in being an Australian. Right now though, I’m ashamed.

Ten weeks ago, I posed the rhetorical question on these pages as to whether anybody could predict, with a modicum of accuracy, what would happen next in the evolving human disaster that’s infected our world for the past 18 months.

One could easily have predicted that 2021 would be torturous and bumpy; that myriad wretched scenarios across nations and continents, rich and poor, would play out. Marginal gains would be eroded and then some, through missteps and diabolical political decisions.

Impossible problems would arise, regarding insufficient supplies of coronavirus vaccine doses to sate the demands of those wishing to be vaccinated (and countless others who should be). Apparently, it’s not as simple as constructing more vaccine-brewing machines.

All of that duly noted, the approach of Scott Morrison’s government to vaccine procurement, distribution and administration constitutes an unmitigated disaster of proportions this country hasn’t experienced in living memory. The notion that Australia’s vaccination program is not “a race” shall surely forever haunt the Prime Minister, both on his darkest days and his brightest.

The level of ruin, which will in turn be inflicted on the nation Morrison leads, is immeasurable at this juncture. It’s embarrassing, and justifiably shameful. 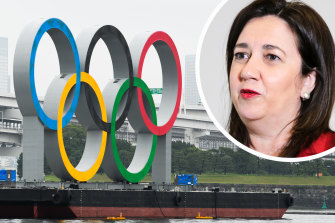 It’s at least incongruous that Annastacia Palaszczuk would depart the country in the same month she and her cohort have demanded that the number of arrivals into Australia be slashed.Credit:Getty, Bloomberg

What one couldn’t have predicted – I don’t think so, anyway – was that through this unravelling debacle, Australia would reveal itself not as a united country, but as a pathetically loose rabble of six tin-pot fiefdoms glued together with two other principalities.

The amalgam of national, state and territory leaders; their collective abominable leadership attributes; the heartless treatment of their fellow citizens; and their incessant, vituperative sniping, is deliciously grotesque. And shameful.

There’s a hair trigger in all of this, dividing faithful trust from abject derision; triumph from disaster. The leaders in office in this country, as well as its fiefdoms and principalities, cast tremendous doubt over the notion of what it actually means to be an Australian. As for the country itself, its leaders have failed its people.

The Change.org petition website is nothing if not a wacko wormhole. Regarding the Tokyo Olympics, for example, you can join the petition to “Cancel the Tokyo Olympics to protect our lives”, which already has an impressive 451,000 signatures. Or you can nail your colours to the move to “Make XRP the official cryptocurrency of the Tokyo Olympics 2020!” More than 14,000 people have subscribed to that view, though quite why is anyone’s guess. 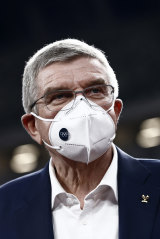 My personal favourite is the petition which seeks to address a glaring hypocrisy, by petitioning the federal government to “Deny Annastacia Palaszczuk an exemption to attend the Tokyo Olympics”. I’m all in on that. Indeed I can’t quite recall the last time I so absolutely subscribed to a notion.

The 138th session of the International Olympic Committee, scheduled for July 20-21, could of course (and most likely will) resolve to award the 2032 Olympic Games to Brisbane and south-east Queensland. In a perfect world, it would be absolutely imperative that the leaders of that city and Queensland be present in Tokyo for such a huge announcement (and to lobby beforehand).

At a basic level, it’s at least incongruous that the Queensland Premier would dare depart the country in the same month she and her cohort have resolutely demanded that the number of arrivals into Australia be slashed.

In circumstances where the Premier and the government she leads has supported a heartless and yet not entirely effective quarantine system for travellers entering Australia (and other awful decisions, which have the effect of preventing family members being by the beds of dying relatives) it can’t stand that Palaszczuk ought to take precedence on a return to Australia.

The optics of that prioritisation are abhorrent. On what possible basis could the Premier’s return to Australia be prioritised over someone else, who may have been waiting for months to return to the Hermit Kingdom?

The IOC president Thomas Bach and vice-president John Coates are eminently reasonable people; they’ll understand the Premier’s absence. Because the notion of Palaszczuk just contemplating travelling to Tokyo for the IOC session is shameful. The actual act would be reprehensible, should the tea leaves not be read.

Without even the slightest qualification or reservation, the forthcoming Olympics must commence as planned. Three-quarters of all Olympians, from 1896 in Athens to Brazil five years ago, have participated at just one Games. For the more than 11,000 who’ll get the chance in Tokyo, this is their zenith. Most will get no second chance in Paris.

Nonetheless, there exists a threat that the Tokyo Olympics might devolve into the uber-spreader event of the COVID age; a petri dish that conjures the “Olympia” variant. That’s a very real risk, when 11,000 athletes and eight times as many media, officials and staff descend on one city from all corners of the world.

Do I – someone with no epidemiological qualifications, training or knowledge – consider what may yet transpire in Japan to be inevitably disastrous? I’ve no idea, and I’m wickedly unqualified to opine.

But with the pandemic protocols and procedures introduced by the IOC and Tokyo organisers, the Games must proceed. Aside from the interests of the athletes, the world needs the Olympics right now.

If these Games didn’t represent the one opportunity to climb K2 for three-quarters of the athletes who make the journey to Tokyo, the Games would’ve been cancelled long ago; such is the disordered state of the world. It’s because so many athletes get only that singular opportunity that they must proceed. Sure, there’s the money thing as well.

Australia desperately needs the Olympics to an even greater extent. There’s nothing at all unifying or proud about this country at the moment, apart from maybe Ash Barty. Any rhetoric of national spirit which rose up in the dark times from about March 2020 has long since vanished. What has replaced it, is as diabolical as it is dismal.

Australia needs the Tokyo Olympics. Even more, it needs the IOC to announce the inevitable awarding of the 2032 Games to Brisbane.

What Australia most definitely doesn’t need is a Queensland Premier in Tokyo, in a manner completely at odds with her own government’s pointed rhetoric and white noise. If anything, send Barty instead: everybody loves her, she’ll be there anyway, and she won’t be committing the grandest of hypocrisies by sneaking out from behind the “Banana Curtain”.