What was supposed to be a day of reckoning for rogue Chinese swimming superstar Sun Yang has become a wake-up call for the international anti-doping apparatus, with a leading lawyer branding the system 'broken' after it was laid bare in the Court of Arbitration for Sport in Switzerland.

Sun, a multiple Olympic freestyle champion, has been the subject of an appeal by the World Anti-Doping Agency (WADA) after he was originally let off without sanction by FINA, swimming's governing body, for having a security officer smash a vial of drawn blood during a test at his home in September of 2018.

Sun claimed the testing agents did not have the correct identification, something WADA argued against, and that letting them leave with his blood would have compromised the evidence chain and left it open to tampering. 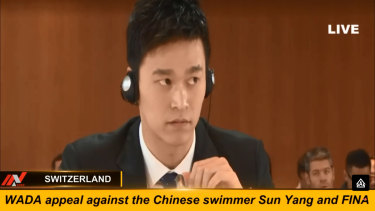 WADA's appeal was marred by translation errors that could end up being costly for Sun, with human rights lawyer and and former Canadian Olympic swimmer Nikki Dryden saying CAS looked completely unequipped to handle such an important case.

"The fact that CAS was not prepared for the proper translation is the most interesting point for CAS to realise. CAS could not even realise that the athlete could or couldn’t speak in his own language. That’s such a fundamental part of justice. Not getting that right makes a mockery of the entire thing," Dryden said.

"It all felt very rushed. They cut Sun Yang off from finishing his final statement. I found that farcical as well. Either way it was kind of laughable. From the big picture, it showed me that CAS is ill-equipped to make sure they are protecting the due process and rights of athletes."

Sun, 27, could be banned for as long as eight years, ending his career. Dryden hopes that won't rest on a series of clunky exchanges in which questions were mangled through the interpretation process.

"It appeared to me as if these white European and Canadian men had never spoken to someone before that didn’t speak English. It was if they weren’t prepared that translation takes twice as long, that some words don’t translate properly.

"They were using these big complex words that I wouldn’t use in everyday speech. Why would you use them if they can’t be translated properly. That kind of stuff is just basic lawyering.

"At the beginning, Sun’s testimony was incoherent. The WADA cross-examination was a disaster because of the translation. But when the translation was working ok, he didn’t answer a single question. There were very few moments when I got new information. I could have just read the FINA report and I would have known everything.

"There was no gotcha moment in this."

Regardless of the outcome of the case, the rare CAS hearing has proven to be illuminating when it comes to the strict liabilities placed on athletes compared to the rules around testing agencies. WADA deputy-director Stuart Kemp told the hearing that best practice was a guideline, not an enforceable rule.

"I thought that was where Sun and his lawyer should have gone for the jugular… we are held to this high standard, we have to update our information, all these things we have to do that are a strict liability scenario. And then there are you guys… there are standards but aren’t best practices. What the heck?

"You have to separate the athlete from the issue here. And at the end of the day, if Sun Yang wins this appeal, I think it will be very good for athletes more broadly, because it will hold these testing companies, who are making money out of this, to account. It will make WADA lift their guidelines to a higher standard, not the lowest common denominator.

"This hearing doesn’t make me know what the truth is… but what it did show me is that CAS is incompetent and the international doping system is broken."

A ruling in the case is not expected until towards the end of the year or early January.