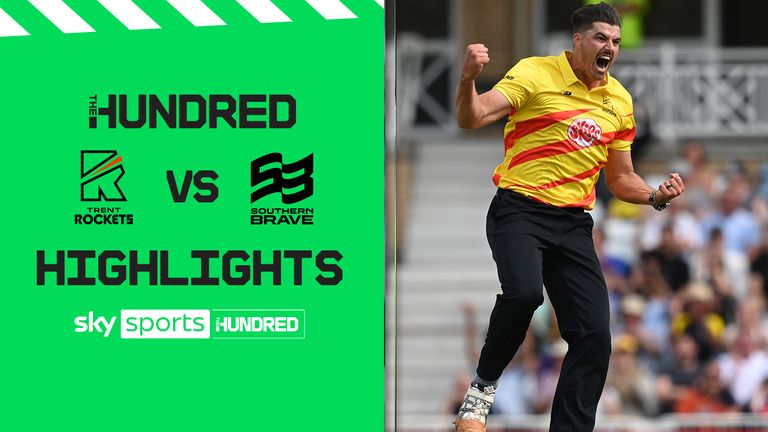 Trent Rockets cruised to a comfortable nine-wicket win over Southern Brave as Marchant de Lange created a bit of Hundred history, taking the first five-wicket haul in the tournament.

The Rockets romped to their 126-run target, clinching victory with 18 balls to spare as England batter Dawid Malan cracked an unbeaten 62 off 43 balls.

But, truthfully, the win was set up due to the fine work of the Rockets with the ball, as De Lange claimed a wicket with a quarter of his deliveries in finishing with 5-20 from his set of 20.

The first five-wicket haul in #TheHundred, and it belongs to the big Trent Rockets fast bowler! 👏

Ross Whiteley smacked 39 not out off 29 balls lower down the order for the Brave, but they never really recovered from a stuttering start which saw them slip to 71-6 despite winning the toss and electing to make first use of the Trent Bridge pitch.

The Brave rallied somewhat to ultimately post a score of 126-8, but it proved to be well below-par, despite George Garton bowling Alex Hales for a first-ball duck in reply to briefly raise the hopes of the visitors.

Trent Rockets are romping towards a convincing win here as Dawin Malan brings up a 35-ball fifty – 33 more runs needed from 38 balls. #TheHundred 💯

Malan joined a somewhat scratchy D’Arcy Short (51 off 41 balls) at the crease and the pair dominated proceedings thereafter, with the latter also bringing up a half century a ball before hitting the winning run.

De Lange’s fifth! The damage was already done, the Brave were limping to a low score, but it was still a ‘first’ in the history of The Hundred.

With the 98th ball of the Brave innings, and his 18th, De Lange sent Garton’s stumps cartwheeling out of the ground to cue wild celebrations among the giddy fast bowler and his team-mates.

De Lange was also rightfully named Hero of the Match, though Malan too produced a fine display to silence the doubters after a recent rough patch with the bat during the international white-ball series against Pakistan.

D'Arcy short goes through to 50 before then hitting the winning run – Rockets romping to a nine-wicket victory! #TheHundred 💯#TrentRockets 🟡 | #SouthernBrave 🟢

Joe Root also deserves a special mention. Not required with the bat, but the England Test captain got through a full 20-ball quota of his part-time off spin and, as well as conceding just 17 runs, he took a wicket with a ‘wrong’un’ to Liam Dawson which turned away from the right-hander and bowled him for five.

Joe Root deceives Liam Dawson with a legspinner that turns away from the right-hander and bowls him for 5!

Root, in fact, upstaged his team-mate, and No 1 draft pick in The Hundred, Rashid Khan, who went wicketless and conceded 28 runs in his debut outing. 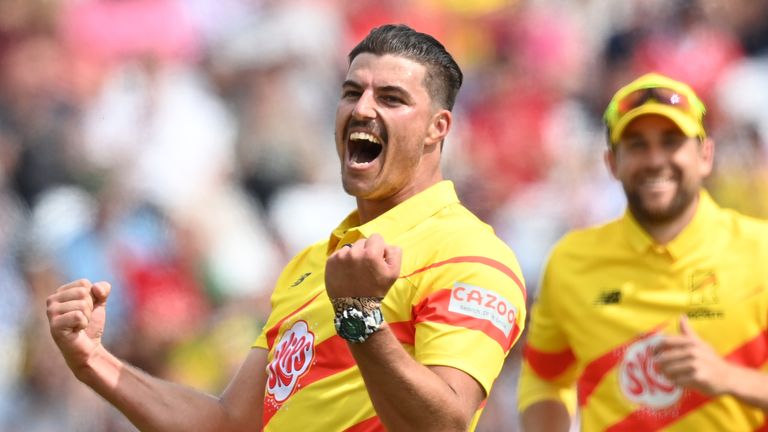 De Lange was first introduced after 35 balls of the Brave innings, and he struck straight away, picking up Delray Rawlins caught at cover for seven.

At the end of that first five, he bowled Colin de Grandhomme (4) round his legs, and returned to claim fellow New Zealand batsman Devon Conway (18) just after the midway point of the innings.

Required to bowl the final five balls of the innings, De Lange then ended Chris Jordan’s handy cameo of 16 from 14 balls and then bowled Garton two balls later to make Hundred history.

Rockets fast bowler De Lange: “The top wicket-takers in the short formats are normally spinners and slower bowlers but I feel like there is a time and a place for express pace.

“I tried to keep it simple and just do the basics well and it was a pitch that helped me today.

“I didn’t expect to be involved in the competition until a couple of weeks ago but I just try to take opportunities whenever they come along.”

“In general, our bowling unit stuck to their plans and our captain led very well. We’ve got a solid team and we gelled together pretty well for the first time out.”

Brave captain James Vince: “Our performance on the pitch wasn’t ideal, but it will make us hungry to improve quickly and come back strongly in our next game.

“From a batting point of view, we lost regular wickets and never really got anything going together. Credit to their bowlers, Marchant in particular. We knew we were under par at halfway.”

There’s one final clash to come on Saturday, with the Northern Superchargers and Welsh Fire men in action from Headlingley – live on Sky Sports The Hundred and Sky One from 5.30pm.

Then, on Sunday, there’s another quadruple-header in The Hundred, with London derbies between the Spirit and Invincibles, as well matchups between Manchester Originals and Birmingham Phoenix.

The Spirit and Invincibles women’s squads kick things off from 10.30am, which will also be live streamed on Sky Sports Cricket YouTube channel.