Home » Sport » Tokyo Olympics: For Gregg Popovich and Team USA its gold or nothing

Tokyo Olympics: For Gregg Popovich and Team USA its gold or nothing The last time Gregg Popovich worked with Team USA at an Olympics was 2004.

He was an assistant coach for the men’s team that won bronze, and his first foray at the Olympics as head coach might be heading towards a similar outcome.

In 2004, his superstar power forward Tim Duncan for the San Antonio Spurs was a leader on the USA roster. Duncan was also one of the few top Americans to have not dropped out of representing the country after the FIBA Americas Cup, where the team had romped to an undefeated championship a year earlier.

So if Team USA go out sad are we finally going to have to have a conversation that maybe it was just Tim Duncan’s greatness and not Coach Pop that made San Antonio so great for so long? 👀

But without Jason Kidd, Tracy McGrady, Jermaine O’Neal, Vince Carter, Mike Bibby, Ray Allen and Elton Brand – all top players at the time in the NBA – or other elite players such as Kobe Bryant, Shaquille O’Neal, Kevin Garnett or Chauncey Billups, the USA fielded a group of young men without much professional experience and only B-grade talent.

When you look back at the names that joined Team USA, it’s not a terrible list: rookies LeBron James, Dwyane Wade and Carmelo Anthony were there, as was sophomore Amar’e Stoudemire. But so too was Emeka Okafor, who hadn’t played a minute of professional basketball. They were joined by Shawn Marion, Richard Jefferson, Lamar Odom, Carlos Boozer – none of whom were ever the best guy on a good team – and a pair of dominant ball handlers in Stephon Marbury and Allen Iverson. And of course Duncan, who was arguably the best player in the NBA.

Had all these players been brought in at their peak this could have been a gold medal team, but the mix of inexperience and lesser talent wasn’t enough to support the duelling superstars that represented chalk and cheese on the hardwood, Iverson and Duncan.

The Dream was over It was the worst iteration of what some were still calling the ‘Dream Team’. The moniker came from the 1992 Olympics when professional basketball players from the NBA were first allowed to suit up for their nation. The men’s USA team comprised Michael Jordan, Larry Bird, Magic Johnson, Charles Barkley, John Stockton, Karl Malone, David Robinson, Patrick Ewing, Chris Mullen, Clyde Drexler, Scottie Pippen, and, in a nod to the college athletes that previously represented the USA at the Olympics, Christian Laettner. Aside from the latter, there had never been a better collection of basketball talent put together.

Vice-President of NBA Europe Ralph Rivera believes it was this moment that acted as a catalyst for the rest of the world catching up to the USA in terms of talent. “It was pivotal,” he told Sky Sports earlier this year.

“I think you can trace back the big bang of the NBA to the Dream Team in 1992. Pau Gasol talked about the fact that it happened in his hometown and inspired him and a generation of kids like him to follow the players and the league. In fact, that was the impetus as well for opening the European office two years later in 1994.”

The Dream Team nickname had probably worn off by 1996, but there were still top players on each incarnation, and some still used the term going into the 2004 Olympics, when the talent had taken an undeniable dip. The NBA had also seen an influx of internationals as a result of the first Dream Team inspiring other nations to pick up the orange ball. Detlef Schrempf became the first European All-Star in 1993, and his fellow German Dirk Nowitzki had become a good player in the early 2000s. Serbia’s Peja Stojakovic as one of the NBA’s leading scorers in the mid-2000s, China’s Yao Ming had become an international sensation and Tony Parker and Manu Ginobili had joined Tim Duncan and Gregg Popovich’s Spurs from France and Argentina, respectively.

These days, the floodgates of international NBA talent are well and truly open with around a fifth of the NBA’s roster spots being taken by players overseas.

There hasn’t been an American Most Valuable Player since James Harden in 2018, and the Defensive Player of the Year Award hasn’t been presented to someone from the USA since 2017.

With the likes of Luka Doncic, Giannis Antetokounmpo, Nikola Jokic, Rudy Gobert and Joel Embiid cementing their status as All-Stars, as well as leading their respective teams to top seeds – and Giannis leading his to an NBA championship – during a season when 107 NBA players were born outside of the USA, the growth and influence of overseas talent within the league is clear.

Even so, several top international players are now finding they can make more money as a star in a league in their home country rather than accepting a similar amount to play limited minutes in the NBA.

Simply put, the USA needs its best players to turn up year after year if they want to compete for gold.

Get worse before you get better It almost seems like the USA needs to lose an Olympics before the country reworks its international programme. After missing out on a gold medal in 1988, then NBA Commissioner David Stern worked closely with USA Basketball and the Olympic Committee to bring in professionals. It took three Summer Games of succeeding before gold eluded them again in 2004.

Many complained that the players had stopped taking it seriously when Tim Duncan’s team settled for bronze, as there was a mentality for some to rock up one year before the Olympics took place, play a tournament to get used to FIBA rules, then win the big one.

After 2004, the USA scrapped the coaching staff and started from scratch with the players. That meant assistant coach Gregg Popovich was out of the fold – he was considered for the top job but apparently didn’t show enough hunger for the position – and Duke University coach Mike Krzyzewski took over on the proviso that he would stick around to set up a pathway.

Players were also told that they have to commit to multiple summers, attend training camps, compete in tournaments and be part of a wider group that would be selected on merit closer to the time. There was no guarantee they would be selected and they would have to give up their time. 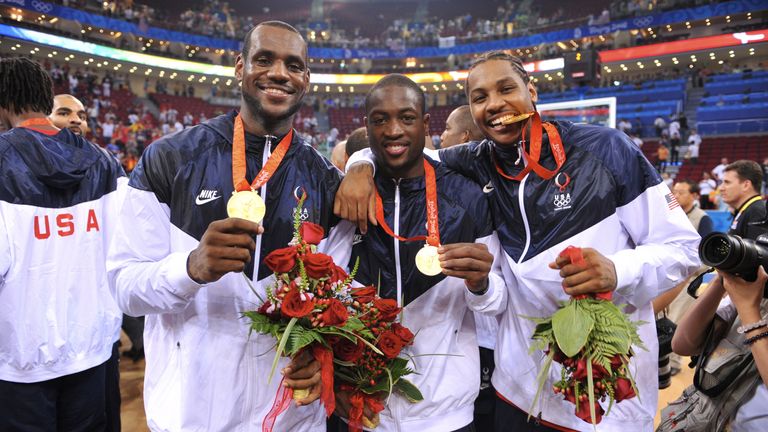 LeBron James, Carmelo Anthony and Dwyane Wade were NBA veterans in 2008. They had become the best players (or certainly on the top tier) and they returned to Team USA to avenge their rookie-year embarrassment on the national stage. The big guns were brought in: Kobe Bryant and Jason Kidd were now elder statesmen in the league but they set the tone for a ‘gold or nothing’ mentality. And a few younger players – such as Chris Paul, Deron Williams and Dwight Howard – learned from the best.

This is when the Dream Team was officially retired. In came the Redeem Team.

It ushered in three more Olympic gold medals, but when Krzyzewski retired from international commitments after Rio, Gregg Popovich finally got his run as head coach.

The problem? The top players were beginning to tire of giving up their free time.

Wade and James completed their third Olympic cycle and stepped away from 2016. Anthony stayed on but that would prove to be his last. That team successfully ushered in a new generation that included Kevin Durant, Kyrie Irving, Klay Thompson, Paul George and Jimmy Butler, but after the Rio Games, some of the top stars had lost motivation to attend training camps and tournaments each summer.

At the FIBA World Cup in 2019, in his first major tournament, Popovich was left without much star power and a lot of youth. The result was a defeat to France in the quarter-finals and a miserable seventh-place finish.

No LeBron James, Stephen Curry, Damian Lillard, Kawhi Leonard, Anthony Davis, James Harden, nor Kevin Durant. The scoring was instead falling onto the shoulders of 22-year-olds Donovan Mitchell and Jaylen Brown, and a 21-year-old Jayson Tatum. We might look back on some of those names one day with the same appreciation that we do with Wade, Anthony and James today, but they were not reliable superstars at that point. The only hope is that some of them will have been able to use that experience at Tokyo 2020, when some of the truly elite players will have returned.

Covid-19 threw a spanner in that plan. With the Olympics delayed and such a short turnaround between the 2019-20 season and the 2020-21 season, more players opted for rest this summer, and many of the best players were simply not available. Popovich was once again given one or two superstars, supported by a number of players who are second, third, and even fourth, fifth and sometimes sixth or seventh options on their NBA teams.

The USA men’s Tokyo 2020 roster is not the Dream Team. It’s not even the Redeem Team. And the loss against France in their opening contest, as well as losses to Australia and Nigeria during warm-up exhibitions, shows that Popovich might not have the best luck when it comes to international competition.

The rest of the world has officially caught up to the USA’s men’s teams, and if a nation can’t put out it’s best players, it will be tough to get on the podium.

If they don’t win gold, it could mean another overhaul at USA Basketball to regenerate the enthusiasm that top American-born players need to show up and represent their country. And if Popovich is ousted, it could put a permanent dent on the career of someone who many consider as the best basketball coach of all time.