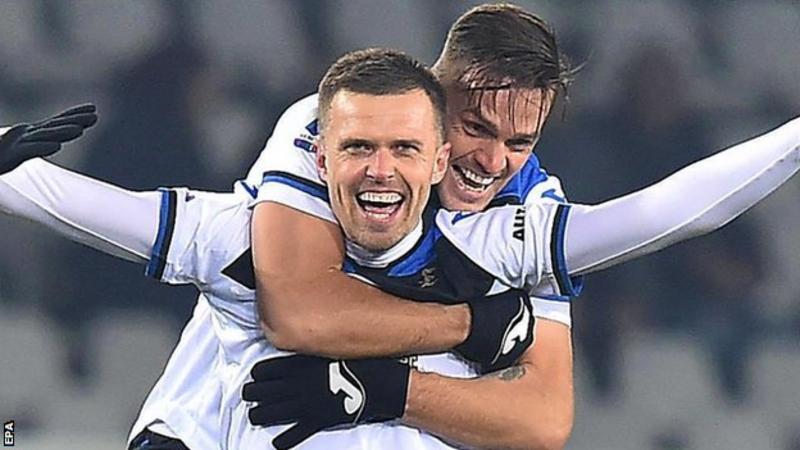 Atalanta dealt a seven-goal thrashing to Torino in Serie A, as Josip Ilicic scored a remarkable goal from the halfway line on his way to a hat-trick.

Slovenian Ilicic struck a quickly taken free-kick from just inside the Torino half to lob home goalkeeper Salvatore Sirigu for his second goal of the game.

Robin Gosens and Dvan Zapata scored before Ilicic extended the lead to 5-0.

The home side had Armando Izzo and Sasa Lukic sent off before Luis Muriel added two more for Atalanta late on.

It is the second time fifth-placed Atalanta have scored seven in one game this season, thumping Udinese 7-1 in October, and they now have 57 league goals this term, 11 more than the next highest side Lazio.

Rather than the scoreline, the game will most likely be remembered for Ilicic’s quick-thinking strike from 40 metres – his ninth goal in his last six games.

Alejandro Gómez (Atalanta) wins a free kick in the defensive half.

Goal! Torino 0, Atalanta 7. Luis Muriel (Atalanta) left footed shot from the left side of the box to the bottom right corner. Assisted by Alejandro Gómez.

Penalty conceded by Soualiho Meité (Torino) after a foul in the penalty area.

Attempt blocked. Alejandro Gómez (Atalanta) right footed shot from the centre of the box is blocked. Assisted by Luis Muriel.

Attempt saved. Alejandro Gómez (Atalanta) right footed shot from outside the box is saved in the bottom left corner.

Attempt saved. Simone Edera (Torino) right footed shot from a difficult angle on the right is saved in the centre of the goal. Assisted by Vincenzo Millico.

Attempt missed. Lyanco (Torino) right footed shot from outside the box is high and wide to the right. Assisted by Soualiho Meité following a corner.

Berat Djimsiti (Atalanta) wins a free kick in the defensive half.

Attempt blocked. Mario Pasalic (Atalanta) right footed shot from the centre of the box is blocked. Assisted by Ruslan Malinovskiy.

Attempt missed. Ruslan Malinovskiy (Atalanta) left footed shot from outside the box is close, but misses to the left. Assisted by Berat Djimsiti.

Hans Hateboer (Atalanta) wins a free kick in the defensive half.

Mario Pasalic (Atalanta) wins a free kick in the defensive half.