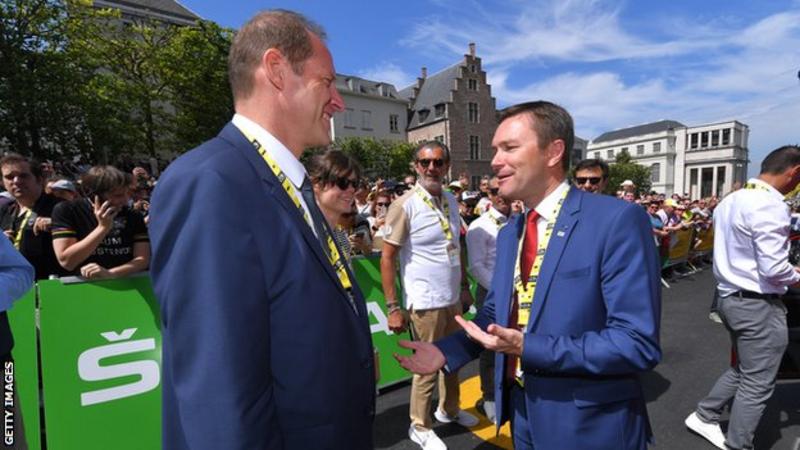 “If we want a women’s Tour de France, we can.

“For women’s cycling we can continue to push – I have had strong discussions with them and I hope we can reach an agreement for the future.”

Lappartient has previously urged ASO to extend La Course to 10 stages, matching the length of the only women’s Grand Tour, the Giro Rosa.

ASO says it is “logistically not possible” to operate a 10-day women’s race during the men’s Tour.

“I’ve said they have to do more – of course they said they are doing a lot of things in other races,” said Lappartient.

“I’ve explained that in this world today we have to support women’s cycling.

Lappartient added that ASO said the increased TV coverage of the men’s Tour meant it was “much more difficult technically” to operate a women’s race alongside as when the Tour de France Feminin ran during the men’s race from 1984 to 1989.

ASO set up La Course in 2014 in response to lobbying from campaign group Le Tour Entier – it ran as a one-day criterium in Paris for the first three editions, moved to a two-day event in 2017 before reverting to one day last year.

The Giro Rosa, which saw Annemiek van Vleuten defend her title this year, struggles for coverage because it runs during the first half of the men’s Tour de France.

“What is missing in our sport is a big stage race for women that can be seen worldwide,” said Lappartient.

“The Tour de France can really help with this, whether it is during the Tour or as another race.”

Can Van Vleuten make it three in a row?

This year, 127 riders from 21 teams will tackle just under five circuits of the men’s 27.2km individual time trial course.

Each lap will include two climbs – the Cote de Gelos and Cote d’Esquillot – with the race finishing with a 500-metre drag to the line.

The course is likely to favour puncheurs – riders who excel on short, sharp climbs – rather than more specialist climbers, though Van Vleuten had a superb one-day campaign this year as well.

Dutch rider Marianne Vos is in tremendous form after winning four Giro Rosa stages, while this is a key race for Britain’s Lizzie Deignan in preparation for the Road World Championships in Yorkshire in September.

Should every sponsor have a women’s team?

Team Ineos is one of several teams not to have a women’s equivalent but Lappartient said he did not want to force current World Tour teams to set up women’s squads.

“We see more and more sponsors now have a women’s team but it was difficult for them to explain why men have minimum salaries but that was not the case for women.

“So we have introduced the same minimum salaries for men and women from 2020 – we have been challenged and criticised for going too fast, but I think we are going fast because we were too slow in the past.”