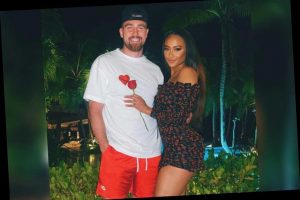 On Wednesday, Kayla Nicole — the girlfriend of Chiefs tight end Travis Kelce — shared a few snippets from their recent getaway to Puerto Rico, weeks after Kansas City fell to the Tampa Bay Buccaneers in Super Bowl 2021.

“When you’re dinner and the view,” Kayla posted to Instagram, geotagging the luxurious Dorado Beach, a Ritz-Carlton Reserve.

In separate videos posted to her Instagram story, Kayla is seen relaxing on the beach in a white bikini, calling their vacation, the “best last minute decision ever.”

An on-air host and model, Kayla has been linked to Kelce since 2017. The pair briefly split over the summer, but by the 2020 holiday season, the five-time Pro Bowler confirmed the couple is back on.

Earlier this month, Kayla attended the Super Bowl in Tampa, Florida, where she put the officiating on blast.

“If yall wanted to see the Chiefs vs the refs just say that,” she later added.

Kayla also posted a critical message about the refs on Instagram.

“Holding: the illegal restraining of another player who is not in possession of the ball,” she wrote, according to People. “Holding is prohibited in most football leagues, unless you’re playing against Tom Brady.”

Despite the loss, Kayla and Kelce appeared to have the time of their lives on vacation.