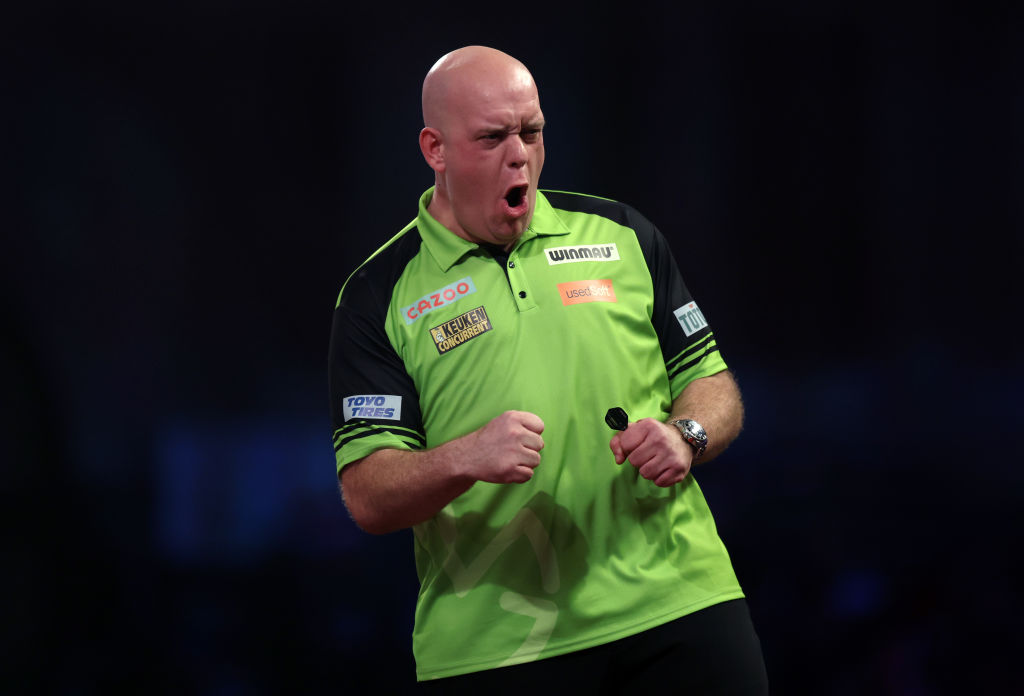 Michael van Gerwen and Michael Smith survived incredible performances from their opponents to reach the last 16 of the World Darts Championship, and they both promise better displays to come.

Van Gerwen got the better of Mensur Suljovic with a 4-2 victory, while Smith ran into Martin Schindler on top form, having to recover from 1-3 down to beat the German 4-3.

MVG, the tournament favourite, was exceptional himself, averaging over 107, but he had to be against the Austrian who was producing stunning moments.

None more stunning than a 161 finish to win the fifth set after Van Gerwen refused a dart at the bullseye, gambling on Suljovic missing the huge out-shot.

‘It’s a lovely shot for him to hit, 19 out of 20 times people would miss and if I was in the same situation tomorrow I would do exactly the same,’ said Van Gerwen.

‘For a good game, you need two good dart players. I think Mensur was phenomenal and he deserves a lot of credit.

‘I feel really comfortable, I feel good, and to win the way I did, that gives me extra motivation and confidence.

‘It’s going to be a tough game, it’s going to be entertaining,’ said Smith. ‘I’ve got to keep focussed. He’s one of my best mates on tour, but we’ve got to put that aside, whoever shouts “game on” we’re enemies then.’

‘We know we have great games, we can compete against each other. It would be an amazing final, but first I’ve got to play Joe Cullen.’

Earlier on Wednesday Chris Dobey won four sets on the spin to down two-time champ Gary Anderson 4-1, saying he was fired up by something the Scot said at an interval.

Hollywood would not repeat what Anderson said, suggesting that it was something that could have distracted him on stage, but it in fact focussed his attention on victory.

‘I was a bit nervy there, but Gary said something in the last break and I didn’t like it, so there was no way he was winning after that,’ said Dobey on Sky Sports.

‘It kind of annoyed us, but I came out, the man I am I tried to forget about it. He’s a class lad, but I didn’t agree with what he said and there was no way he was winning this game.’

‘I’m not going to talk about it but it was just something that I didn’t like. He’s a class bloke and everybody knows that, but I just didn’t agree with what he said.’

He added in a press conference: ‘It kind of upset us. It’s hard to deal with what’s going on in your head on stage. I try and compose myself throughout the game and after what was said you start thinking things and you can hear every single thing, it didn’t help me.

‘I don’t know if he was playing mind tricks or not, but I’m the winner, who cares.’

Dobey takes on either Rob Cross or Mervyn King in the last 16, while Van Gerwen will meet either Ross Smith or Dirk van Duijvenbode.