A spirited second-half comeback built on brick-wall defence has sparked Melbourne Vixens to life and consigned the winless Queensland Firebirds to a 71-60 Super Netball defeat.

Led by star goal keeper Emily Mannix, who had a game-high five interceptions, the Vixens consolidated their top-four spot while piling on the misery for the injury-ravaged Firebirds. 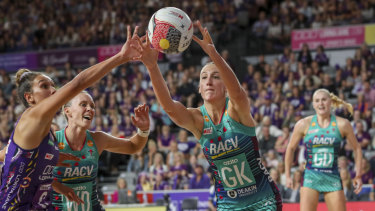 Emily Mannix starred in defence for the Vixens.Credit:AAP

The hosts led 35-32 at the main break but crumbled in the second half of their indigenous round match at the Queensland State Netball Centre.

It was a particularly cruel blow for Firebirds centre Jemma Mi Mi, the only indigenous player in the Super Netball competition, who would have been hoping to celebrate the special day with a much-needed victory in front of her home fans.

Player of the match Caitlin Thwaites potted 43 goals from 47 attempts while goal attack Tegan Philip chipped in with 28 from 33 to silence the home crowd.

"The first half and the home crowd here in Brisbane, they were definitely right behind their charges so we had to kick into another gear," Thwaites said.

"From the start I thought we put it all out there but we managed to find another gear in that third quarter and we have to find the consistency to be able to do that."

Firebirds attackers Gretel Tippett and Lenize Potgieter were superb in the first half, considering it was only their second week together as a combination.

South African Potgieter was parachuted into the side for last week's loss to NSW Swifts as a replacement for star goalshooter Romelda Aiken (leg injury).

However, the Vixens dramatically strengthened their defence after the break to suffocate the in-form Tippett as the Firebirds became increasingly frustrated and were forced into errors in attack.

The Firebirds won the first and second quarters to hold a three-goal advantage at the half – a good effort considering the Vixens' fine attacking duo of Philip and Thwaites.

Young Queensland defenders Kim Jenner and Tara Hinchliffe, both only 21, made crucial interceptions in the second quarter as the Vixens were kept at bay.

But the visitors changed their defensive structure and were a different team after the long break as they broke the Firebirds and went into the final term with a 51-44 lead that they never surrendered.