A RIGHT-OLD East End knees-up was had as West Ham finally started to feel at home at the London Stadium.

Five years have passed since the fevered night at Upton Park when the Hammers said goodbye to life at the Boleyn with a victory over Manchester United. 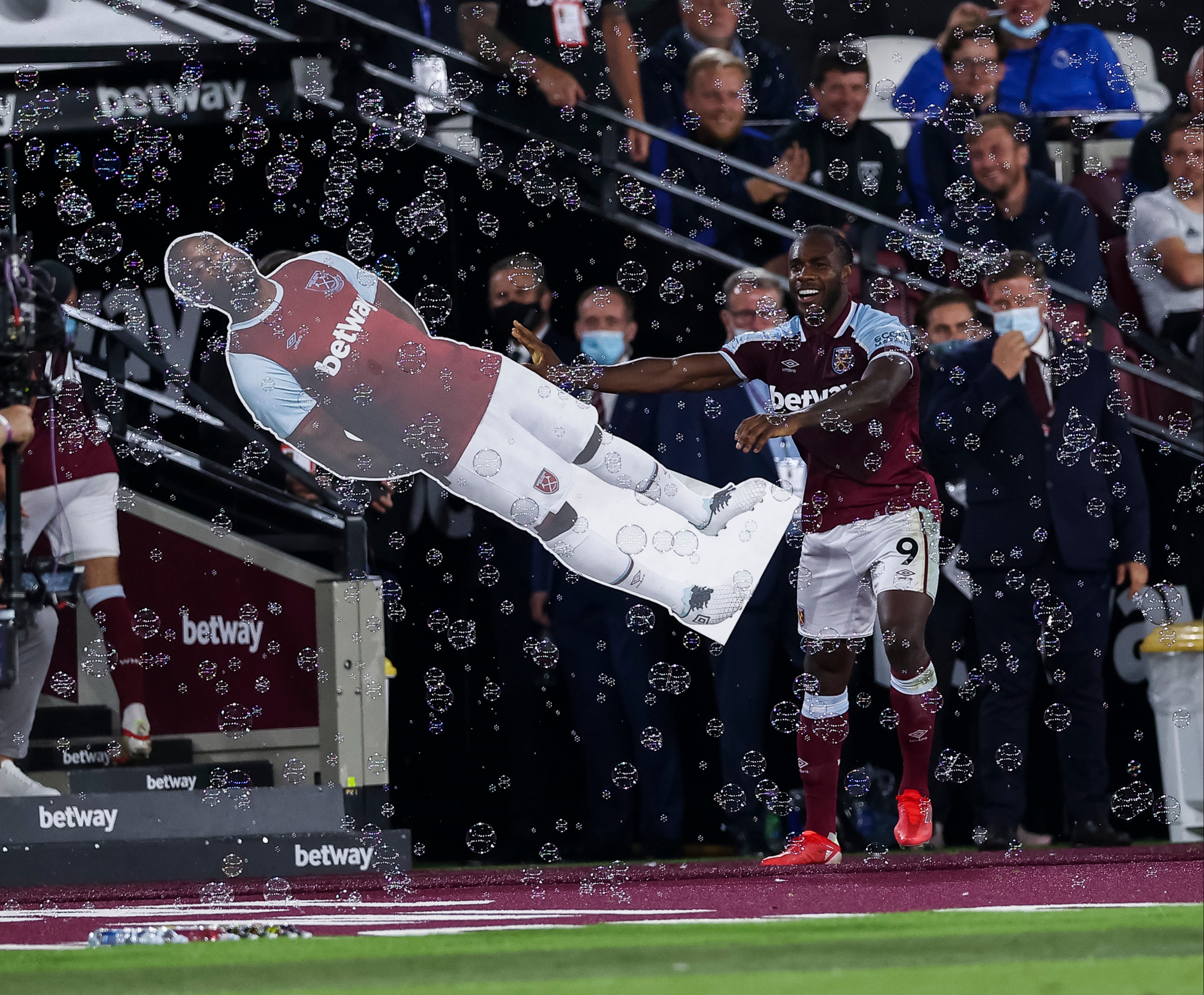 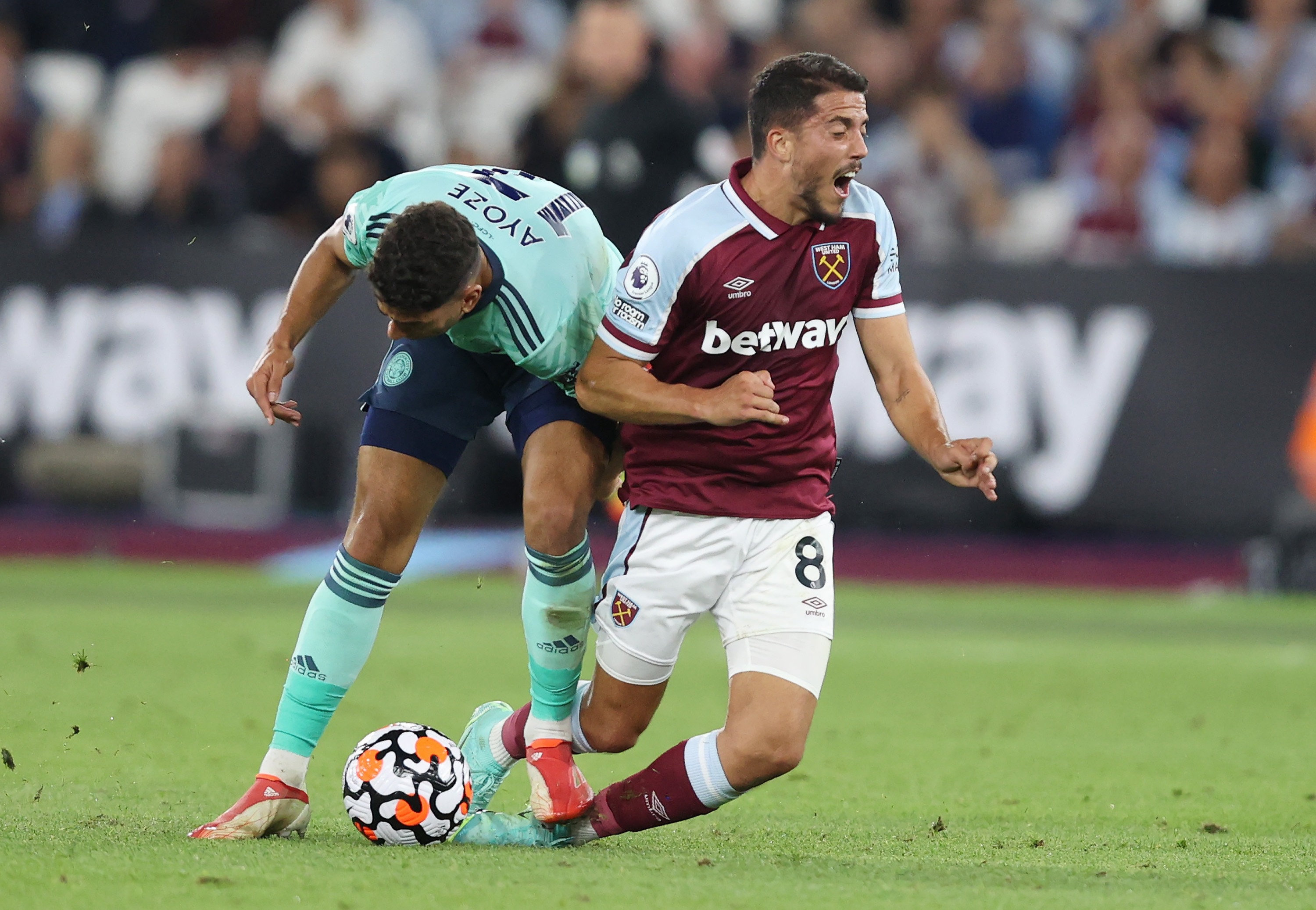 The period since then was largely one of trouble and disharmony as fans, let down by the fudge-job of a football-ready stadium, targeted the board.

But it’s amazing what a period of success can do to lift the mood, and packed into the London Stadium for the first time in 18 months, the supporters celebrated last year’s sixth-place finish.

Not since that raucous night back in 2016 has there been noise at a West Ham game anything like the kind of noise in the old Olympic Stadium.

Spurred on by the support, the Hammers turned on the style against helpless ten-man Leicester – and to cap it all off the finished the night top of the Premier League.

In Michail Antonio West Ham do not possess a striker with the quality and skills of Romelu Lukaku, but when he’s at his barnstorming best he can be as much as a handful for defenders.

And it was Antonio who set the tempo of the Hammers right from the off, sending two Foxes sprawling to the ground in his wake to send out a warning he was in the mood. 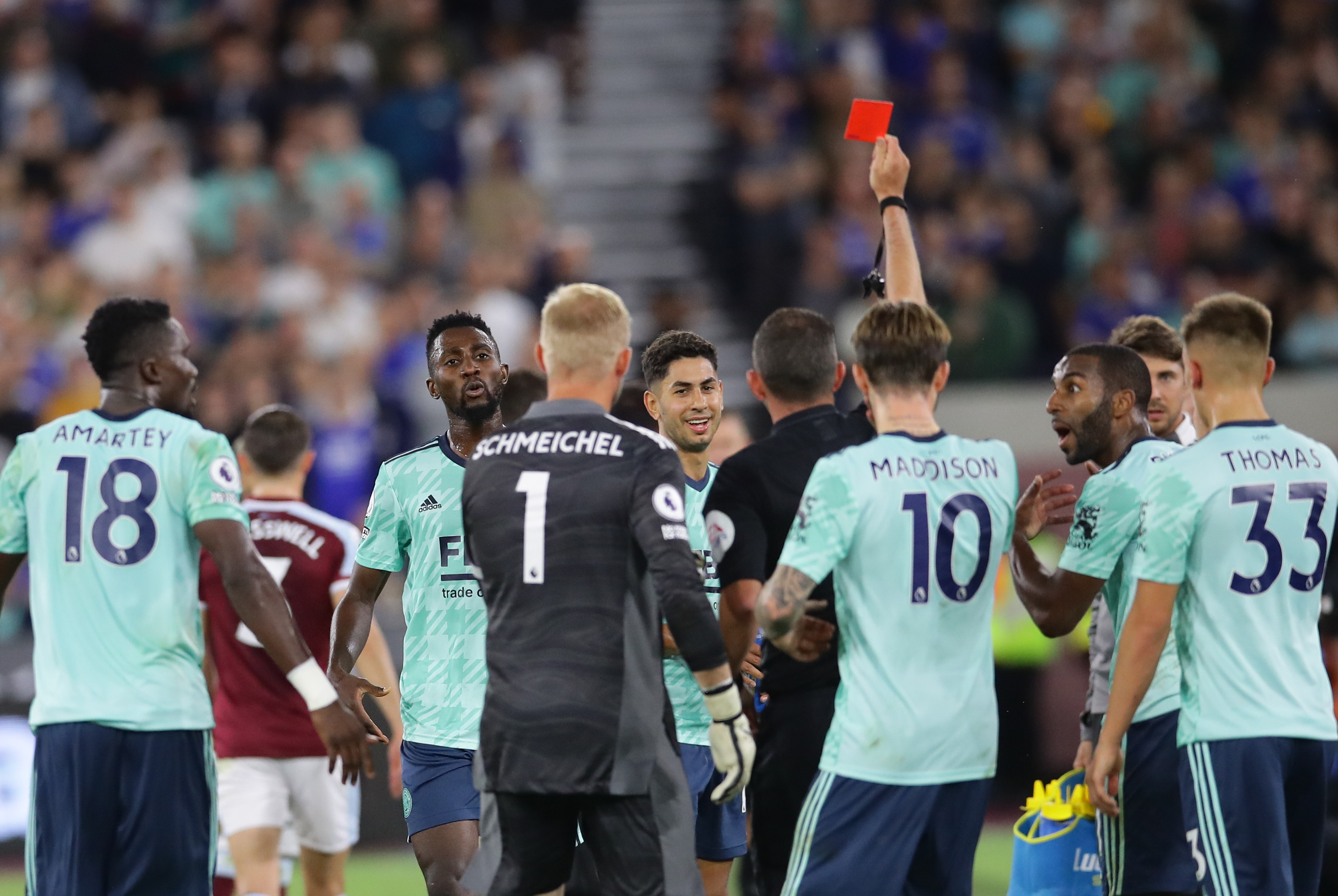 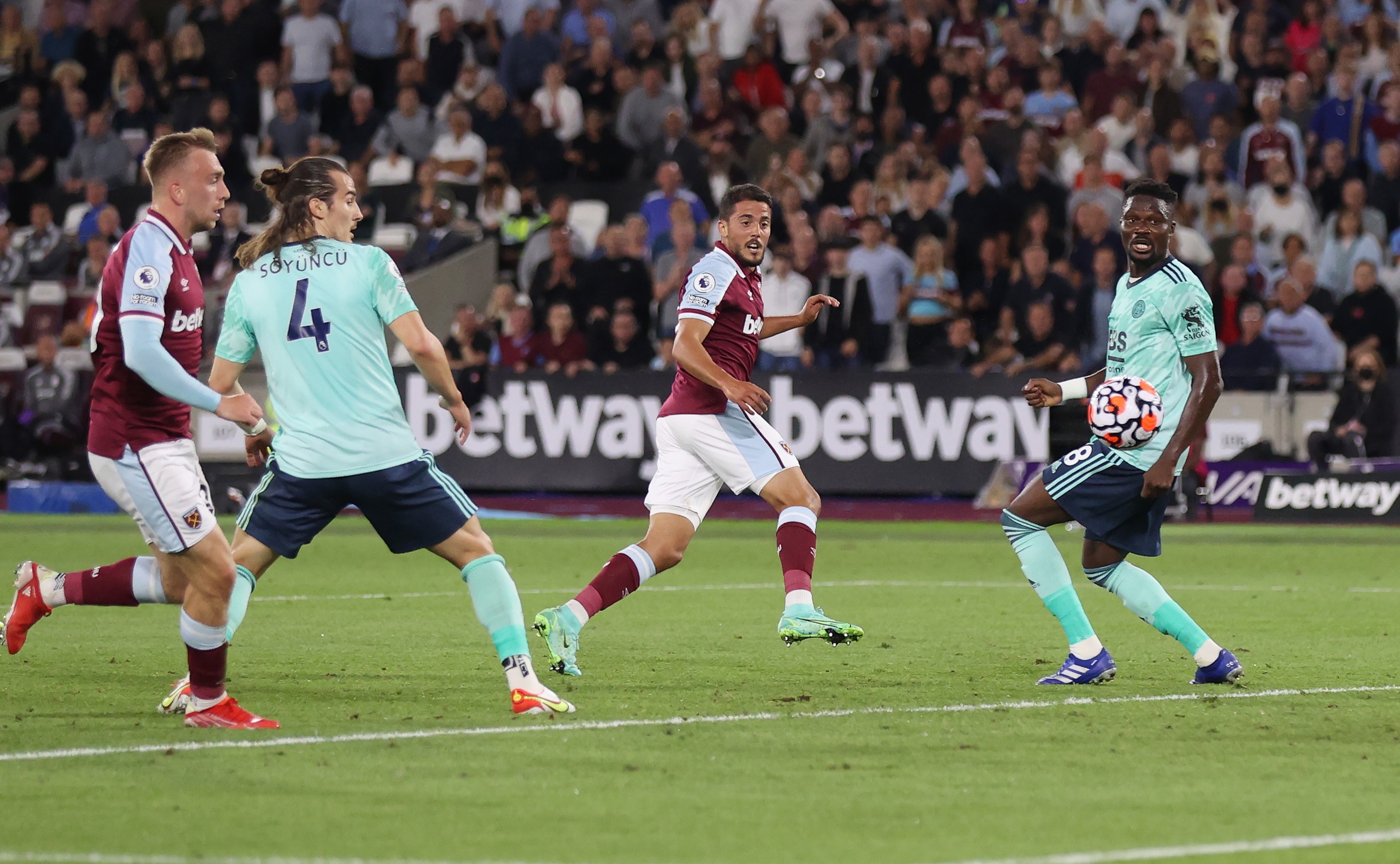 With Leicester finishing last season just a point and a place ahead of West Ham last season, this should have been a really tight battle for supremacy across the pitch.

But instead it was the Hammers who set about their work with more intensity and quality, and if only they were more clinical the game could have been done and dusted by the break.

Said Benrahma was unlucky to see his first time shot fizz straight at Kasper Schmeichel in the Leicester goal on six minutes – and shortly after the Foxes were lucky Antonio sliced wide after again shrugging off the attentions of two defenders.

But on 25 minutes the opening goal finally came, with Jamie Vardy gifting the Hammers possession in midfield with a sloppy pass.

Declan Rice collected and fed Pablo Fornals to dart forward and then set Benrahma away on the left.

The Algerian’s cross was perfect as Fornals burst into the area and guided the ball left-footed into the far corner.

It was nearly two just four minutes later when this time Spaniard Fornals turned provider, whipping in a cross from the right which Tomas Soucek headed inches wide at the near post.

Leicester briefly flickered into life on the half hour as Perez released Ricardo Pereira on the overlap but the full-back’s attempt sliced off his foot wide of target. 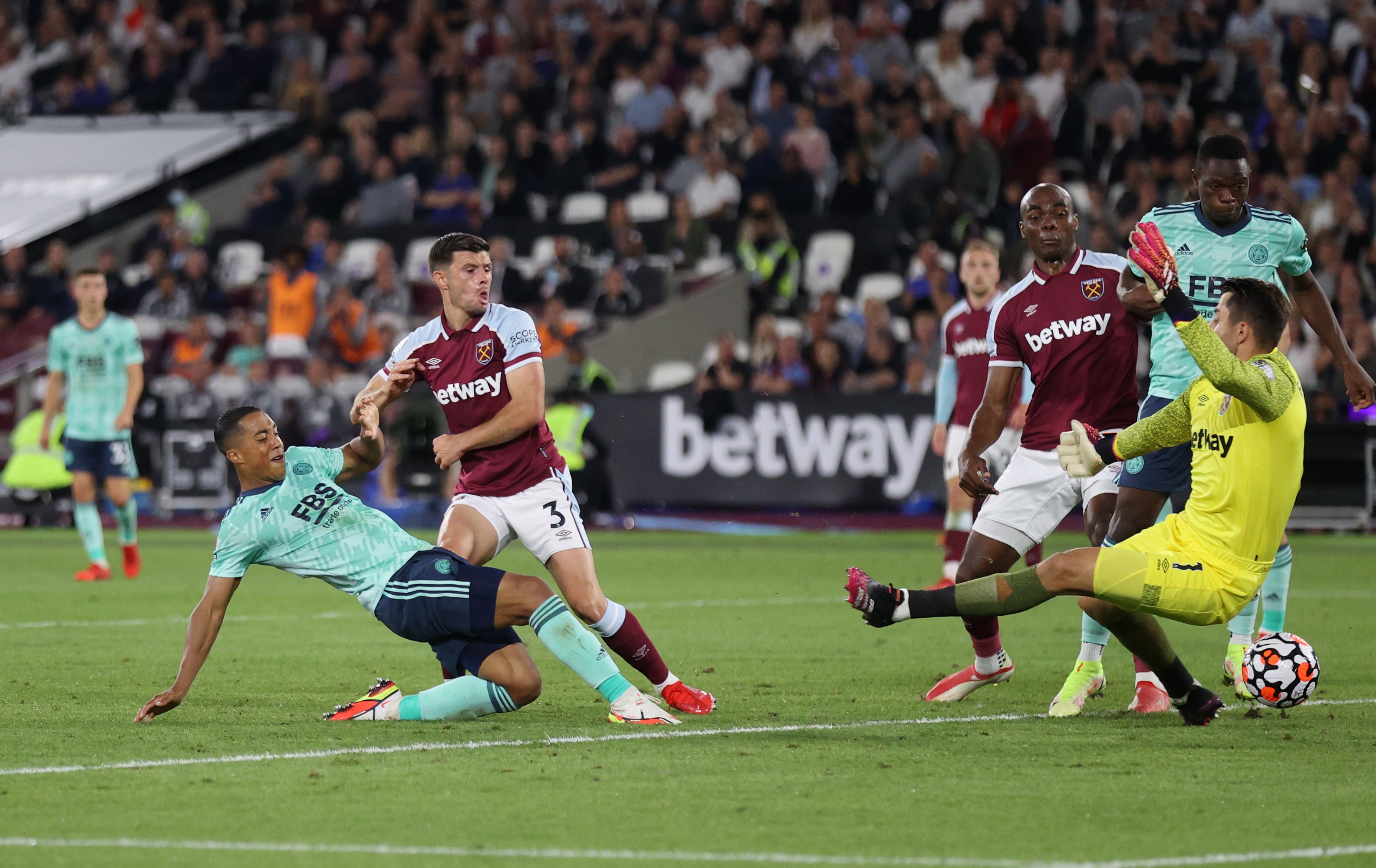 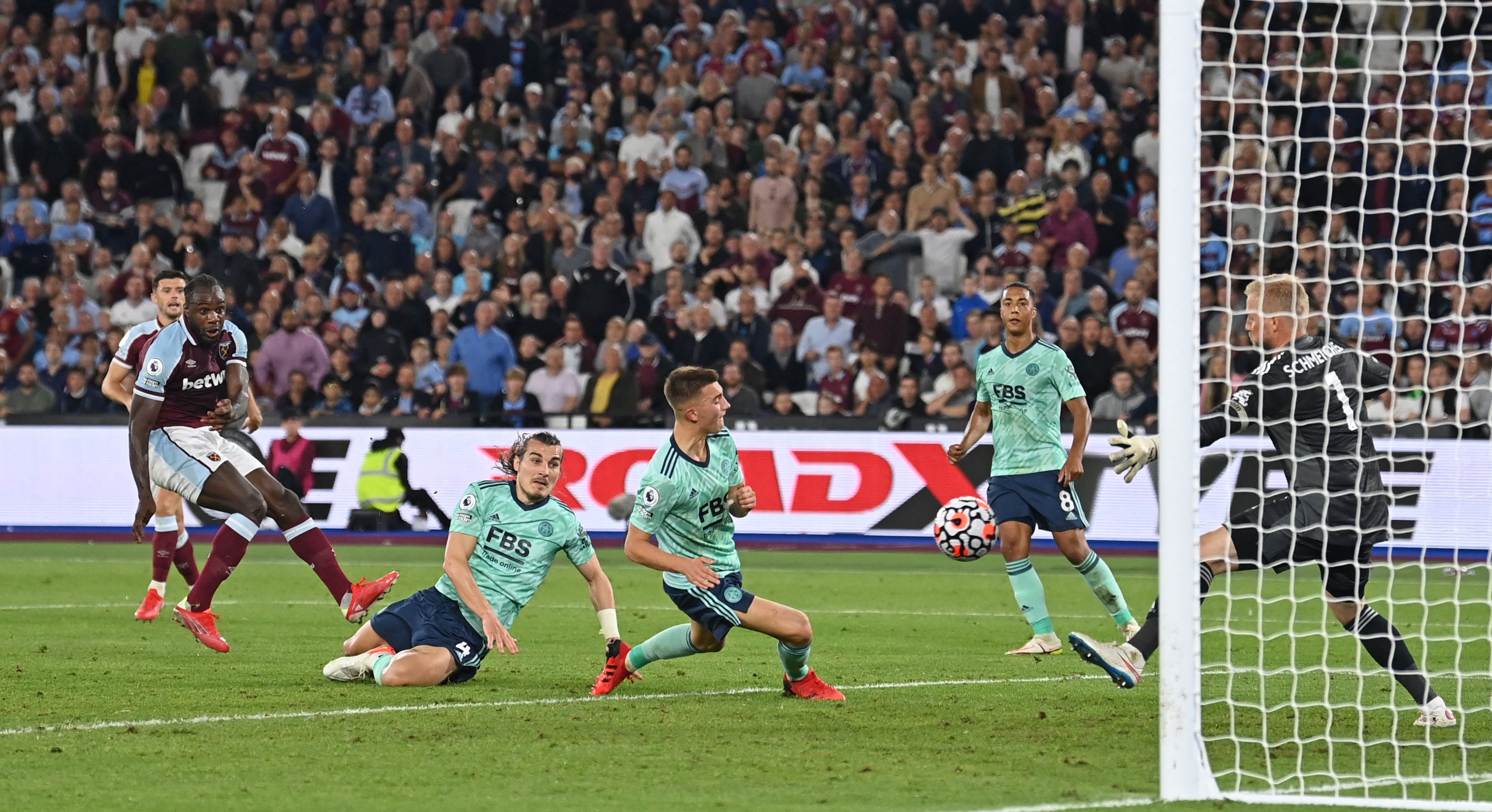 Craig Dawson then spurned a good chance to double the London club’s lead, heading wide from a corner before Leicester’s night took a turn for the worse when they were reduced to ten men five minutes before the break.

Perez stumbled off balance after a tackle with Aaron Cresswell and his left-leg planted right onto the ankle of Fornals who was left in a heap on the floor.

Ref Mike Oliver initially ignored the clash, but on instruction of VAR Darren England he consulted his monitor and wasted no time brandishing the red card.

If Leicester were up against then, they were left with a mountain to climb ten minutes into the second half when another howler gifted West Ham a second goal.

Caglar Soyuncu was culprit this time, blindly passing back to Schmeichel without realising Antonio was lurking, and the striker rolled the ball across for Benrahma to slot home.

Schmeichel had already saved his side with a fine header to deny Antonio before then, and another full stretch effort prevented the forward from a third with a 25-yard effort.

The party was in full flow with the third goal only a matter of time – but suddenly Leicester found a goal from nowhere to stun the ground into silence.

James Maddison clipped a ball in from the left, and Youri Tielemans found the back of the net at the second attempt and suddenly it was game on. 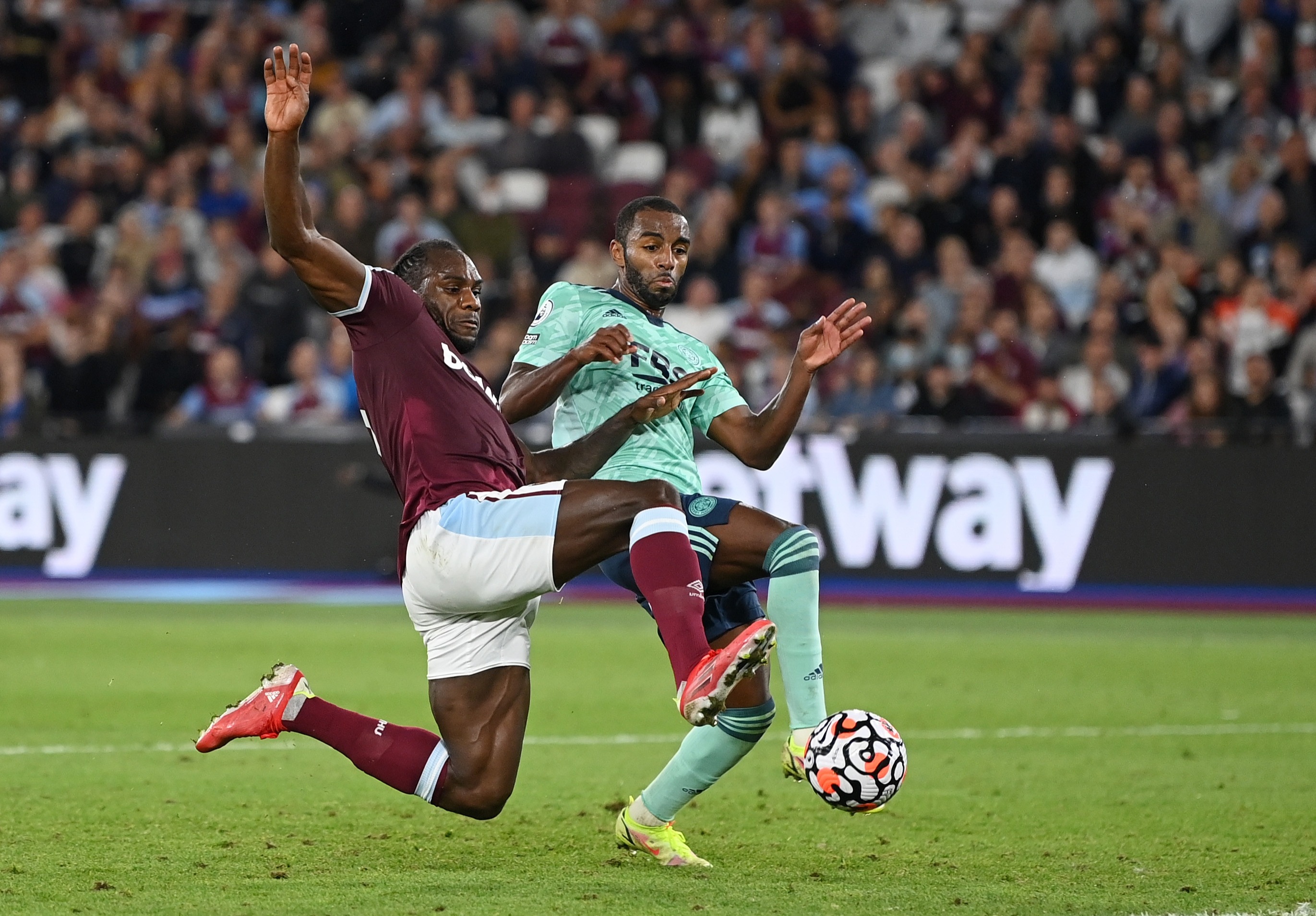 Yet just as the Foxes felt they had a sniff, West Ham delivered another goal of real quality to restore the two-goal advantage on 80 minutes.

They had probed from side to side before Rice suddenly injected a pace with a direct run in the left channel, and crossed for Antonio to hold off his man, swivel and lash into the far corner.

With that the converted full-back moved one ahead of Paolo Di Canio to become the club’s record Premier League goalscorer on 48 – and promptly celebrated by holding aloft a life-size cardboard cut-out of himself.

Four minutes later he helped himself to a second and West Ham’s fourth – enough to see them climb above Chelsea at the summit of the table.

The cockney boys are having a laugh, alright.