CAN the Qatar national team deliver positive performances at the tournament?

Nations generally have success when hosting the FIFA World Cup. Six of the eight champions have won a title when hosting, including Uruguay’s win in 1930 and England’s victory in 1966. 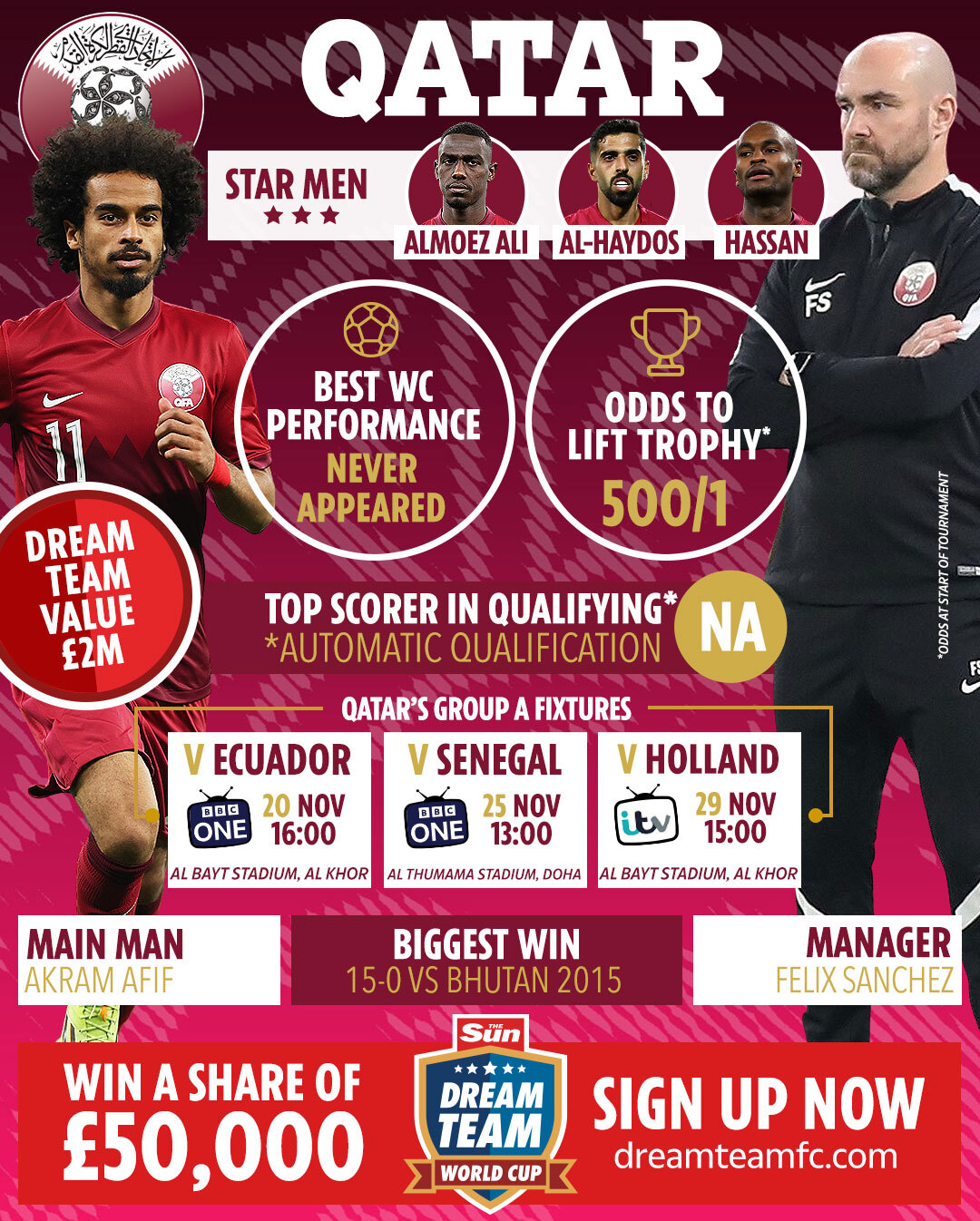 South Korea finished fourth in 2002, albeit with the assistance of questionable refereeing decisions; this is the type of result Qatar will be dreaming of.

Contrastingly, South Africa in 2010 are the only host nation that failed to advance beyond the group stage.

In a group with an exciting Ecuador side, the AFCON reigning champions in Senegal, and a Netherlands team unbeaten in 15 games, many will expect a group-stage elimination for Qatar.

Let’s have a look at how Qatar play and what you can expect to see on the pitch. 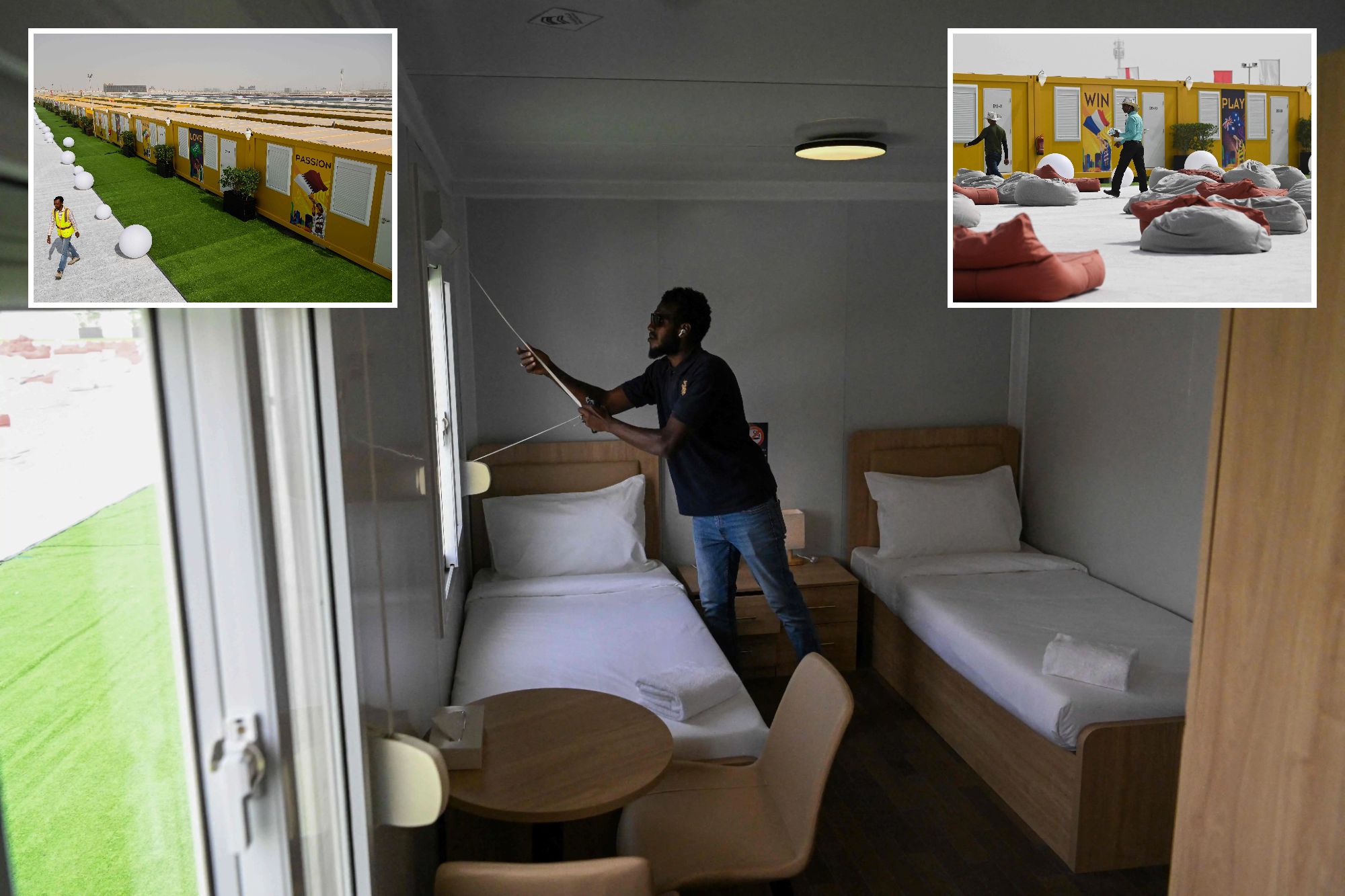 If Qatar are to perform at the 2022 FIFA World Cup, their continuity across the last few years will be essential.

From the predicted starting XI below, they have registered 1,017 appearances, an astonishing average of 92 caps per starter.

Four of the predicted starters have collected 100+ caps, with captain Hassan Al Haydos being Qatar’s most-capped player with 165 appearances. 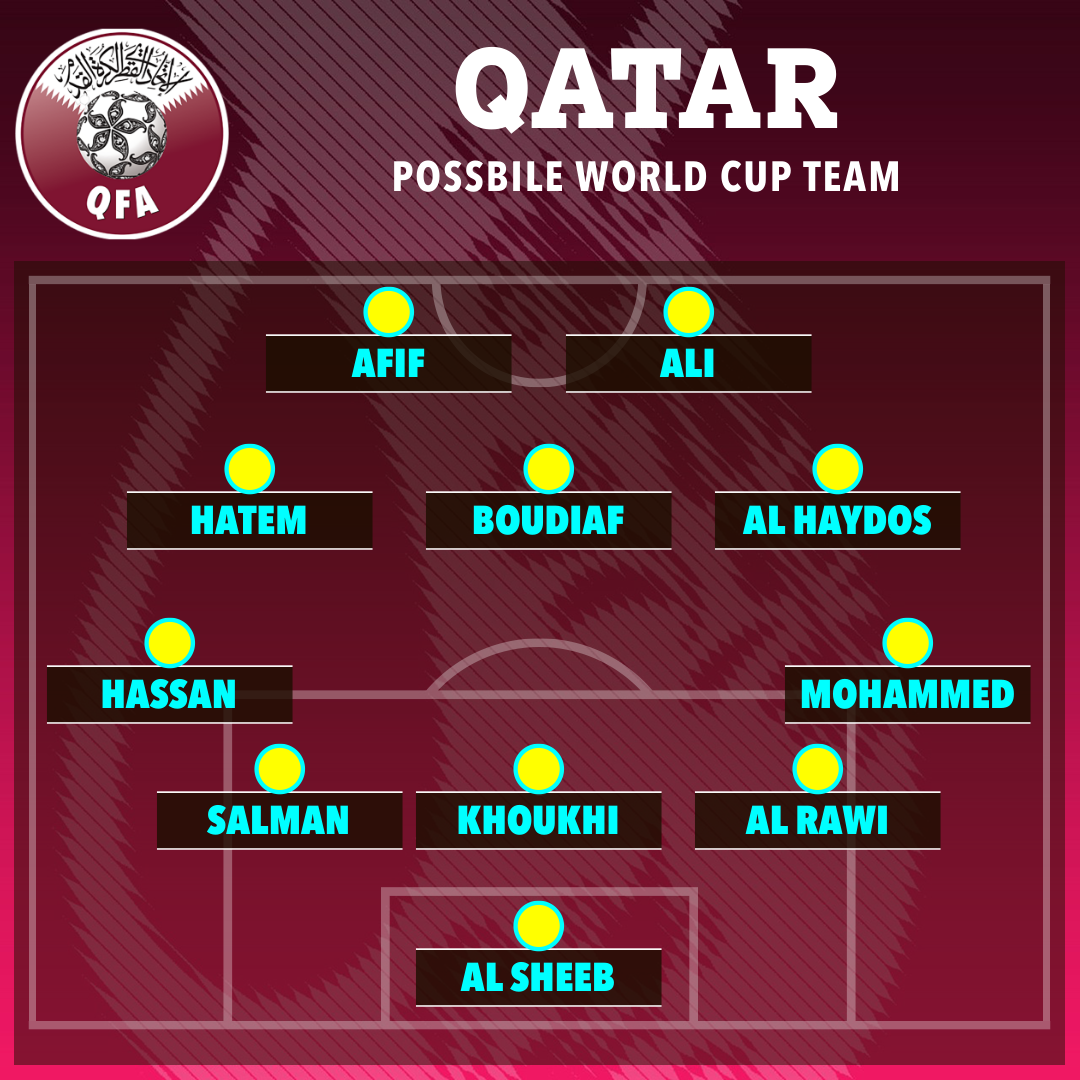 Under manager Félix Sánchez, Qatar have deployed a 5-3-2 in recent years. This consistency has also been aided by their World Cup preparations.

Building up to this historic tournament, Qatar have undergone multiple training camps and began their third and final preparatory phase in October ahead of the opening game against Ecuador on the 20th of November.

None of the 27 players selected for the final preparatory phase have appeared in the Qatar Stars League so far this season, with full focus on the World Cup.

The final consistent link in the Qatar national team is the Aspire Academy, a hub of sporting excellence in Doha.

A considerable contingent of the squad came through the football programme at the Aspire Academy.

Félix Sánchez left Barcelona’s La Masia to join the Aspire Academy in 2006 and has been in Qatar ever since, working his way up from the youth sides to his senior team appointment in 2017.

In possession, Qatar are not a ball-dominant side.

In the last year, Félix Sánchez’s team have averaged 46.63% possession with their approach tending to focus on resisting pressure and fast-paced attacks.

From the eight games in which Qatar have had less than 50% possession, they attempted more shots than their opponents in six of them.

From goal kicks, though, Sánchez’s side mainly play short. This can, in essence, create Qatar’s threatening moments from their own goal kicks by attracting opponents into Qatar’s defensive third before playing behind them to face their own goal.

Boualem Khoukhi is capable of playing these longer passes, averaging 8.76 progressive passes per 90 with a strong accuracy of 77.27% for Al Sadd in the Qatar Stars League last season.

With the two wing-backs pushing forward, the midfield three will remain ahead of the defence in the build-up phase rather than joining the forward line.

The midfielders will have staggered positioning to provide different options and aid ball progression out of the defence.

Attacker Akram Afif is often given full freedom to roam and influence Qatar’s attacking play wherever. With a tendency to operate in and around the left half-space, Afif regularly drops into the midfield or unoccupied spaces to receive freely from the centre-backs.

As Qatar’s key player, Afif is the usual target for the Maroon’s attacks. However, his tendency to drop deep or wide to the left can leave striker Almoez Ali isolated.

Learning from manager Hernán Crespo at Al Duhail before joining the national team camps, Ali is impressive with his back to goal given his isolated circumstances. He has a comfortable first touch and uses his body to resist pressure, whilst also offering accurate passing to build attacks. 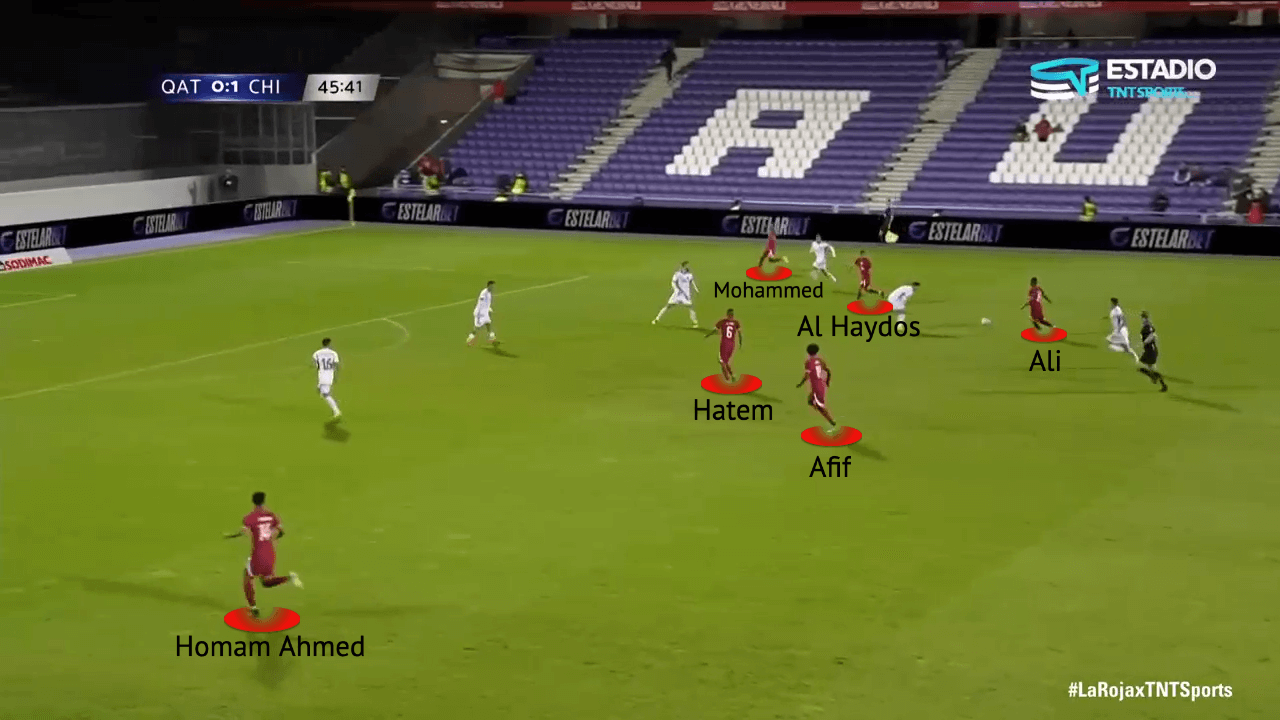 After a sustained spell of possession, Qatar’s attacking shape under Sánchez becomes more of a 3-1-6.

With their counterattacking approach against stronger teams, we wouldn’t expect Qatar to sustain attacking pressure too often against World Cup quality but their shape naturally becomes a 3-1-6 during attacking transitions too.

With the two wing-backs remaining high and wide whilst Almoez Ali is central, support will push up from deep.

Out of possession, Félix Sánchez sets Qatar up to defend in a 5-3-2. The two wing-backs are attached to the defensive line to create a flat five. The wing-backs generally only move into the wide areas when the opposition winger is receiving by the touchline.

Due to the congested space in central areas from the back five and midfield three, their overloads allow the centre-backs to man-mark an opposition attacker that is dropping off.

However, once the attacker travels in front of the Qatar midfield, the centre-back will move back into position.

An example of this can be seen in the figure below against Chile. 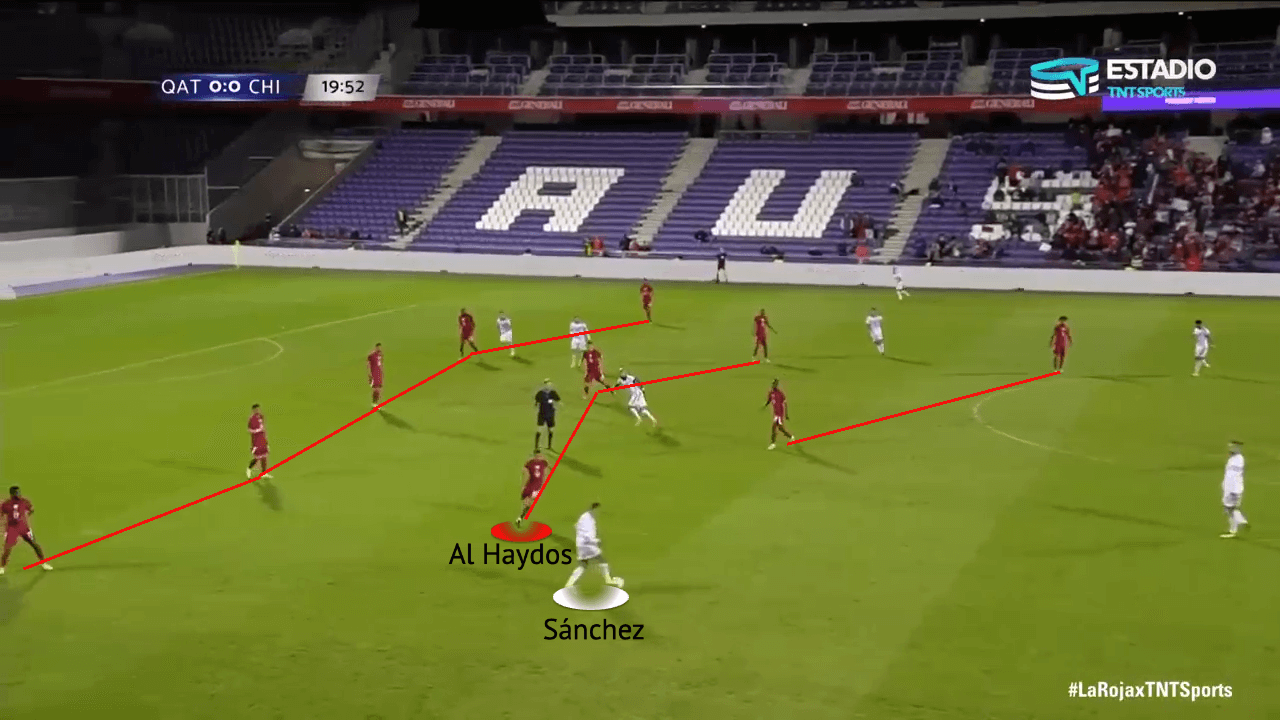 Akram Afif lacks defensive work rate, typically just roaming to positions that could threaten in attacking transitions. This allows the opposition’s defenders time on the ball with the opportunity to step into midfield.

Senegal and Ecuador also have defenders that can accelerate attacks and break through Qatar’s structure, like Pape Abou Cissé and William Pacho. When the opposition have possession in deeper areas, attempting to progress into the final third, Qatar’s wing-backs occasionally jump out of the defensive line to press the opponent’s full-backs. 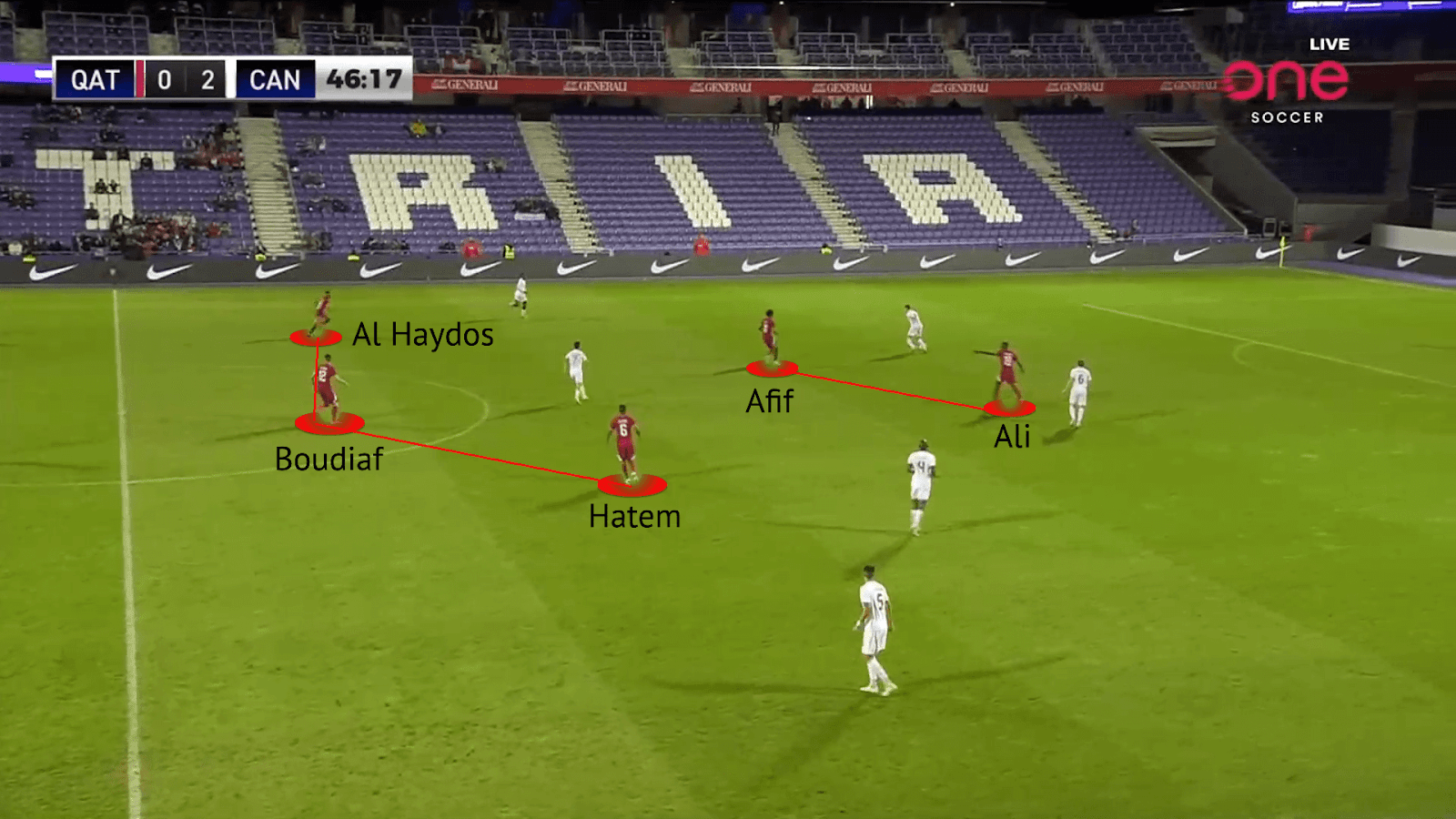 Qatar’s out-of-possession focus is to absorb pressure in their defensive structure, limiting openings and space in and around the defensive line whilst conceding spaces in deeper areas.

As a result, Félix Sánchez’s side on average allow the opposition to play 23.73 passes per defensive action. This is a stark contrast from the high-pressing approaches of Senegal, Ecuador and the Netherlands.

With their sit-back and counterattack approach, attacking transitions are crucial to Qatar’s success. In the last year, 38.7% of Qatar’s counterattacks have ended in shots, averaging at over 1.5 per game, which is a decent efficiency for Félix Sánchez’s side.

Ecuador and the Netherlands are generally quite good at limiting opposition counterattacks, with Senegal potentially the opponent Qatar will have the most success in attacking transitions against.

Nevertheless, the Maroon will certainly threaten with counterattacks against any opponent, and it would be required to progress beyond the group stage. 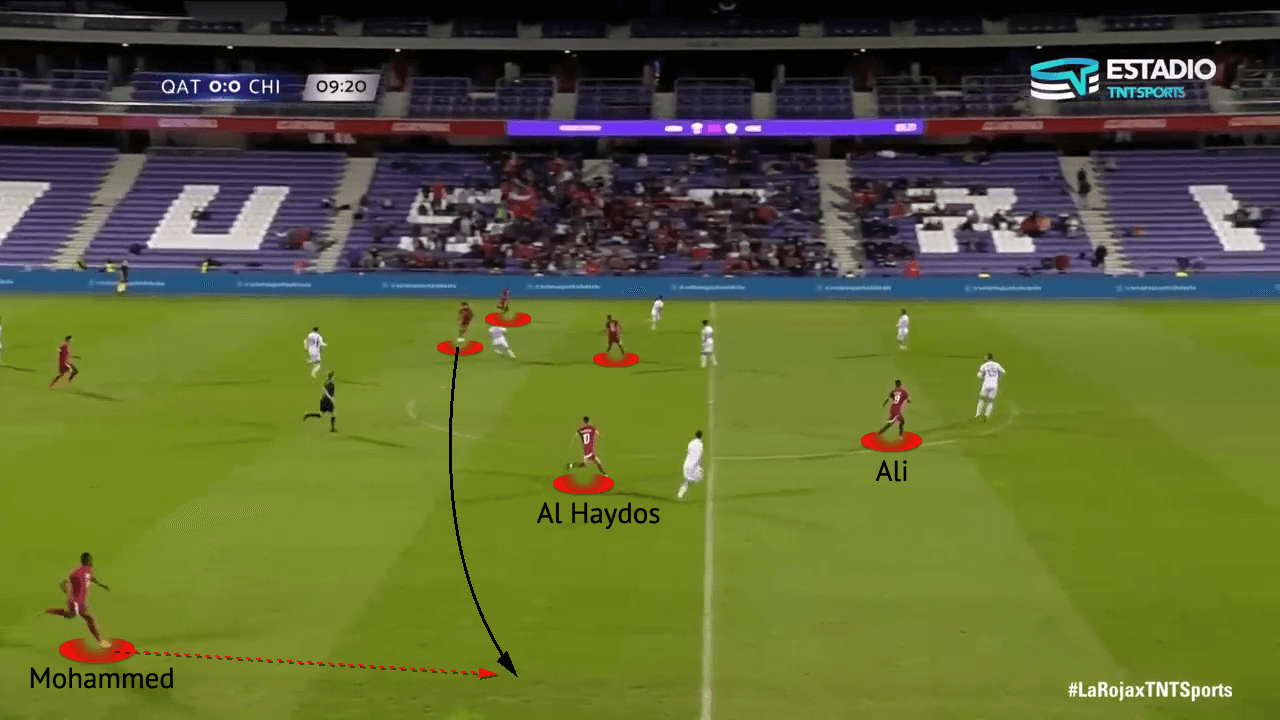 The image is an example of Qatar’s counterattacks against Chile. Akram Afif, the player in possession, is the primary receiver of forward passes to trigger counterattacks as a talented ball carrier. 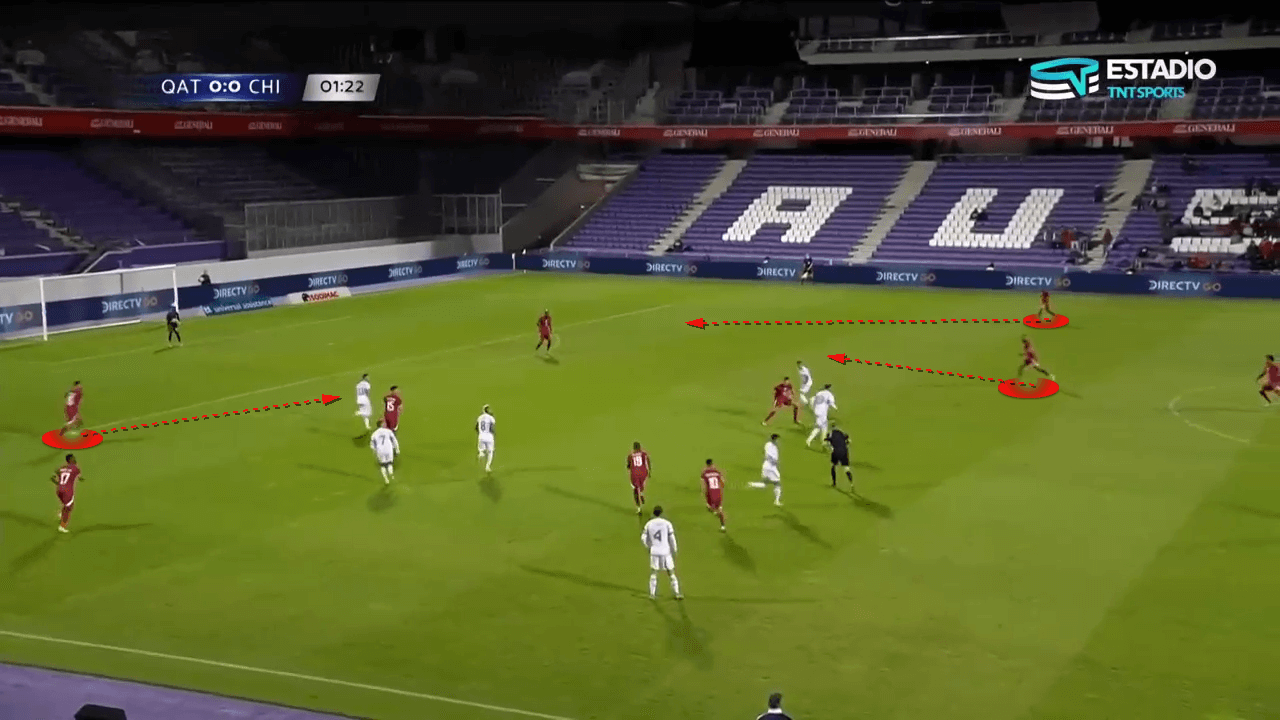 In defensive transitions, Qatar have less of a focus on counter-pressing with their intentions to rush back into a solid defensive shape.

In possession, it is clear that Félix Sánchez wants them to receive the ball as frequently as possible.

Akram Afif has the freedom to drop during the build-up phase to receive in space off the centre-backs, whilst also having the license in rest-attack to drift into areas where he thinks Qatar can best progress and penetrate.

Almoez Ali is much more of a selfless player. Willing to take on Afif’s defensive workload whilst remaining compact, his attacking game is also really strong.

He can resist pressure with his back to goal and find supporting teammates with accuracy, whilst registering 50 goals and 47 assists in 163 games for Al Duhail.

All three are willing to cover ground defensively, with Boudiaf tending to sit in front and protect the defence with his aerial and ground duelling ability. Al Sadd’s Al Haydos provides riskier attacking intent and has incredible chemistry with key player Akram Afif.

We expect Abdelkarim Hassan, Bassam Al Rawi and Boualem Khoukhi to be guaranteed starters for Qatar at the World Cup, but manager Félix Sánchez has a few options to complete the back five. Left-footed Hassan has been deployed as the left-sided centre-back and left wing-back.

Meanwhile, Al Gharafa’s Homam Ahmed is a suitable, consistent player for the left wing-back role as Hassan’s back-up or alongside Hassan.

Portugal-born Pedro Miguel has also played left centre-back but has spent most of his career playing at right-back.

Khoukhi and Al Rawi will start in the centre and right of the three centre-backs respectively, with Tarek Salman another option for the left centre-back spot.

Akram Afif is a right-footed attacker at the heart of Qatar’s attacking play.

The 2019 Asian Footballer of the Year often operates as the left winger for Qatari club Al Sadd but Félix Sánchez deploys Afif in a strike partnership with Almoez Ali.

As mentioned earlier, Afif is allowed to drift into different positions to receive possession and influence the game as much as possible.

He can take too many touches in deeper phases, which will be punished on the biggest stage and was punished by Chile’s Alexis Sánchez in September.

He is essential to Qatar’s counterattacks with his quality ball manipulation and ability to skip past challenges making him the target for attacking transitions.

His responsibilities also include set pieces, with his eye-catching afro regularly seen over the Maroon’s free-kicks and corners.

Being realistic, Qatar will be playing just the three games in their World Cup. A single point gained could be considered a success – potentially in the opener against Ecuador.

Other than that, we will remember Qatar as the venue not the football team.