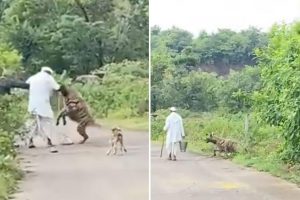 TERRIFYING footage shows the moment a massive hyena launched an attack on an elderly man and his little dog.  The chilling video shows the snarling beast pounce on the terrified gentleman before attacking a motorcyclist. As soon as the hyena attacked, a passerby attempted to rush to his aid before the animal snarled at him. One man can be seen […]