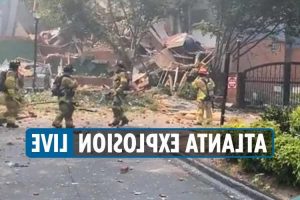 AN apartment complex in Dunwoody, Georgia, collapsed after a gas line allegedly exploded, reportedly injuring three people. Emergency personnel responded to the chaotic scene after the explosion at around 1:30pm that left rubble and loose rock strewn across the parking lot. The scene took place at the Arrive Perimeter apartments building in Dunwoody, a suburb of Atlanta, Georgia. Three people have been injured, […]