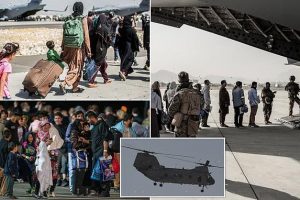 REVEALED: More than 1,000 US citizens and Afghan allies were evacuated through a secret CIA base outside of Kabul during chaotic airlift CIA’s secret Eagle Base used for staging evacuees Afghan commandos considered some of the best fighters in allied govt force Came amid chaos at the airport in Kabul Base in a former brick factory was destroyed in ‘controlled […]