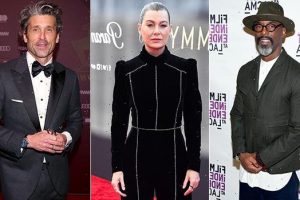 Isaiah Washington alleged that his ‘Grey’s Anatomy’ co-star ‘took $5 million dollars under the table’ to not let the world know about how allegedly ‘toxic’ Patrick Dempsey was on set, in a new radio interview. Isaiah Washington, 58, is making some shocking claims about his time on the Grey’s Anatomy set and what was allegedly done to make outside people […] The latest season of Grey’s Anatomy started off with a huge surprise for longtime viewers: Patrick Dempsey reprised his role as the late Derek Shepard, appearing to Ellen Pompeo’s Meredith Grey in a dream. Though fans may still be reeling from the shock of McDreamy’s appearance, — and that he'll appear in at least three more episodes — the show’s producers […] ELLEN Pompeo was slammed on social media after controversial comments about Harvey Weinstein and the #MeToo movement emerged, from a two year old interview. The Grey's Anatomy star expressed that women "bear some responsibility," when asked about the Hollywood culture, during an Oxford Union Q&A in July 2018. The clip, which was shared on Twitter, prompted one user to brand her […]

Ellen Pompeo Recalls Grey's Anatomy's 'Toxic' Early Seasons: It Was a 'Disaster Behind the Scenes' RELATED STORIES Grey's Anatomy Renewed for Two More Seasons at ABC as Ellen Pompeo Extends Contract Until 2021 Grey's Anatomy's Ellen Pompeo Tears Into Bachelor Boss: 'We Don't Attack Successful Women on Our Network' Ellen “Pulls No Punches” Pompeo is opening up about the turbulent early seasons of Grey’s Anatomy — and she is Not. Holding. Back. “The first 10 […]