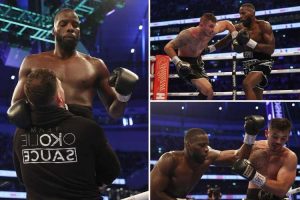 LAWRENCE OKOLIE made a sensational first defence of his cruiserweight world title with a trademark knockout of Dilan Prasovic. Hackney’s heavy-handed WBO cruiserweight champion was the chief support for mentor Anthony Joshua’s defence against Oleksandr Usyk at Tottenham stadium. And the former McDonald’s burger flipper served up the 14th KO of his so-far-faultless 17-0 career in the third round. The […]