'The Forever Purge' is the Final 'Purge' Movie Unless It's Not, Says Producer Jason Blum 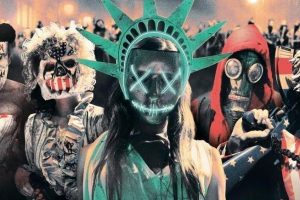 Is The Purge franchise about to purge itself of any possible future installments? Maybe yes and maybe no. According to producer Jason Blum, who recently spoke with /Film, it all depends on franchise creator James DeMonaco, who directed the first three Purge films and has done the screenwriting on all five, including this week’s new theatrical release, The Forever Purge. Will […]