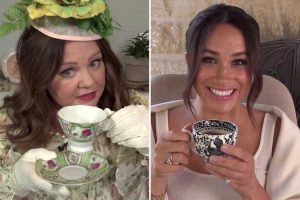 MEGHAN Markle has been accused of mocking the Queen and "showing what she really thinks" of The Firm by a royal expert. Royal Biographer Angela Levin believes the Duchess of Sussex used a video released for her 40th birthday to make veiled swipes at Prince Harry’s family. The former actress called in Bridesmaids star Melissa McCarthy to promote her 40×40 […]