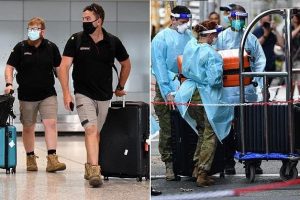 Unions fuming after Qantas stands down workers in ‘terrible day’ Qantas' decision to stand down two-thirds of its workers and make them use up leave to preserve jobs has been backed by Industrial Relations Minister Christian Porter as a "good model" for navigating the coronavirus crisis but criticised by unions. Just a day after the federal government unveiled a $715 million rescue package for Australian airlines, Qantas said it would […] A plane passenger claims he was 'fat-shamed' by a flight attendant after she told him he had to move seats. Darren Beales, from Geelong, Australia, was reportedly ordered to move because he needed an extended seat belt, which is not allowed in an emergency exit row seat, under regulations. Aviation rules state that in the event of a crash, passengers […]