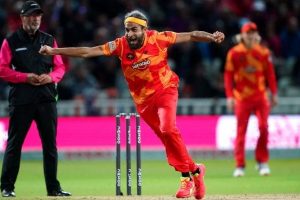 Imran Tahir registered the tournament’s first hat-trick as Birmingham Phoenix moved top of the table with a resounding 93-run victory over Welsh Fire in The Hundred. Earlier in the evening, 19-year-old Will Smeed (65 no) produced another sublime knock, while Moeen Ali (59 off 28) also starred as the hosts posted a mammoth total, although it was Tahir who stole […] JOSH TAYLOR accused Regis Prograis of being “dead on his feet” after he had to strip naked to make the 10st super-lightweight limit for their unification fight on Saturday. The American WBA champ was announced as weighing 10st 1oz so had to call for a towel to be held up around his waist as he dropped his briefs and made […]