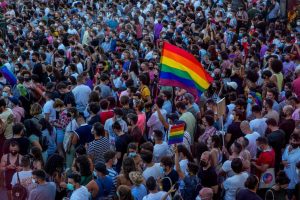 A GANG of thugs have carved a slur into a gay man's buttocks in a horrific homophobic attack in Madrid. The victim, 20, was attacked by eight masked men as he tried leaving his apartment in the Malasana district on Sunday. The thugs cut his lower lip with a knife and called him a "s**t-eater" before scoring a homophobic slur […]