KATE Garraway snapped at a guest on Good Morning Britain after being interrupted as she asked a question. The presenter, 54, was spoken over by former Labour advisor Ayesha Hazarika who attempted to cut in as they discussed the party's leader Keir Starmer. Reflecting on the politicians party conference speech in which he was heckled, Kate asked: "But did he […] 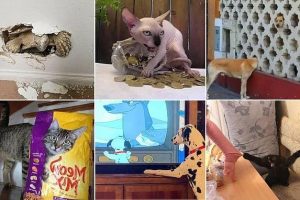 How pet-culiar! People share hilarious photos of their animals acting strangely – from a turtle breaking through a wall to a VERY angry cat Animal Channel rounded up a selection of funny images from around the world Among the post is an angry black cat that appears to be trying to stop a fight Another images shows a turtle attempting […]