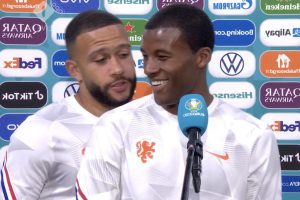 GEORGINIO WIJNALDUM joked that Memphis Depay speaks to him in Spanish, ahead of the forward's impending move to Barcelona. Depay, 27, crashed Wijnaldum's post-match interview, with the pair both on Netherlands duty. The former Manchester United star whispered something to Wijnaldum, prompting a Dutch reporter to ask the new PSG star what Depay had said. With a smile, Wijnaldum joked: […]