A love story unravels in financial ruin and conflict

There is a surprisingly light tone to Snowball, the latest season of the ABC’s true crime podcast Unravel. Compared to the tough, sombre listens of previous seasons, Snowball feels more like a caper movie, a long con stuffed with characters and situations that verge on the ridiculous.

“Previous seasons of Unravel and many other true crime podcasts deal with tragic disappearances and presumed deaths of innocent people. And that’s not the case with this story, so it stands to reason that it’s going to be more lighthearted right off the bat,” says producer and host Ollie Wards.

Snowball tells the story of Wards’ brother Greg, who falls in love with a mysterious American while backpacking through London. Greg and Lezlie are quickly married, but soon Lezlie vanished from Greg’s life leaving his family in financial ruin, having lost their business, family home and life savings. 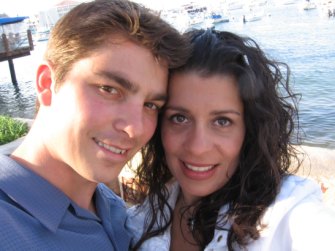 Greg Wards with the mysterious American Lezlie who he married.

Listening to Wards investigate the story he plays a supporting role in what is at times uncomfortable, as he is forced to uncover embarrassing stories from his family’s past.

“There were definitely times where I was being torn between being a producer and a family member,” explains Wards. “It was hard sometimes [speaking with Greg as] my brother on one hand, and also the subject of the story that I’m reporting. But being the ABC, journalistic rigor was applied to [his story] and I didn’t shy away.”

“But there was one time Greg called me and he was really emotional, probably more emotional than you hear in the show. And he started to cry, he was crying about how he still feels pain from what happened. And… in my head, I was like, ‘Oh, my gosh, this is gold. I need to, I need to record this.’ But then the rest of me thought ‘Wait, hang on. This is my brother and he’s going through something difficult that I’m bringing up 10 years on, and I need to be there for him as his brother. And so I stayed on the line with him, and I didn’t record it.”

Despite his involvement and obvious bias, Wards is incredibly fair to all characters involved, allowing all players to have a “right of reply” over the course of the series. And without going into spoilers, there is a satisfying conclusion to the season.

“There is an ending and some sort of closure to as many of the storylines as I could provide. But this is a story that is based on somebody who tells half truths [and makes] wild claims that are unprovable either way. So the whole story is a bit ‘he said, she said,’ because no matter what journalistic approach we took, there was no way to get to the bottom of everything.”

You can hear Unravel: Snowball on the ABC listen app or wherever you get your podcasts.