Good Morning Britain presenter Adil Ray was blasted for his comments about the Prime Minister as he spoke to Grant Shapps on Wednesday’s show. Ray claimed the Prime Minister has a history of lying as he demanded to know how Mr Johnson paid for the refurbishment of his Downing street flat.

Ray began: “Why does Boris Johnson, the Prime Minister, need nearly £100,000 to refit Downing Street, why does he need that kind of money?”

“Well I can’t tell you exactly what sum of money was involved but I can tell you that Downing Street is in an unusual situation because it is both a working office of state, but also a residence,” Shapps replied.

“But I do know the Prime Minister has paid every single penny of the money required to refurbish his own flat that he lives in, even though that essentially belongs to the nation.”

As Shapps tried to divert the conversation to Tony Blair, Ray interrupted. 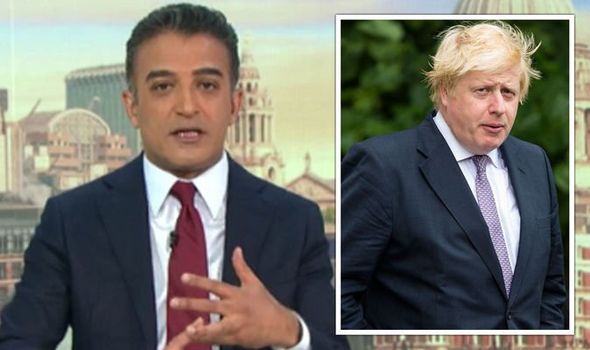 “Where can we see the record of this then? Where is it?” he demanded.

“You say Boris Johnson paid for this flat, where can members of the public go and see where this record is declared?”

Shapps hit back: “Well it will be in the normal way ,which is in the Cabinet Office annual report of accounts.”

As Ray became more infuriated he snapped: “The ministerial register, that hasn’t come out, it’s supposed to come out every six months and we haven’t seen it since July.

“You talk about procedure, you are supposed to have a standards advisor to keep you minister in line with conduct, and you haven’t had one since the last one was sacked five months ago!

“You can’t say there is procedure when actually you are not allowing procedure to take place.”

As Shapps continued to insist Mr Johnson paid the full sum for his flat refurbishment, Ray shouted: “I think the concern is the Prime Minister has got a history of lying.

“He lied before and he was sacked from the cabinet, he lied in his job at one of the broadsheet newspapers, that is why people are concerned. Are we being lied to again?”

Those watching at home were divided over Ray’s reaction and took to Twitter to comment, with some claiming he was not impartial.

One viewer posted: “I’m Adil Ray is trying to be Piers Morgan and failing miserably, he is so out of his league.

“News readers are supposed to be impartial but he just called Boris Johnson a liar. Who is responsible for writing what he reads?”

Another argued: “Challenges???? He just shouted at him, wouldn’t let him answer, awful interviewer, get him off!! And Susanna while you’re at it. Time for a complete overhaul.”

A third tweeted: “Oh no. I used to like Adil but he’s trying to be Piers, all shouty and not letting people answer a question before shouting another one. That’s poor, he’s better than that.”

Someone else continued: “I thought these presenters were supposed to interview their guests, not put across their own political views. @adilray seriously needs to find a very different job, and soon!”

However others believed Ray was right to challenge to Shapps.

“You tell him, Adil! He’s a squirmy one, is Shapps,” one viewer commented.

Another shared: “Congratulations Adil for not trying to go off on tangents, whatever Blair spent has been documented. Whereas here it hasn’t, he claims PM has paid but prove it.”

A third hit back: “And Piers was always impartial wasn’t he..,” defending Ray.

Another defended Ray, insisting: “It is impartial to describe facts as facts. Johnson is a liar.”

Good Morning Britain airs weekdays on ITV at 6am.