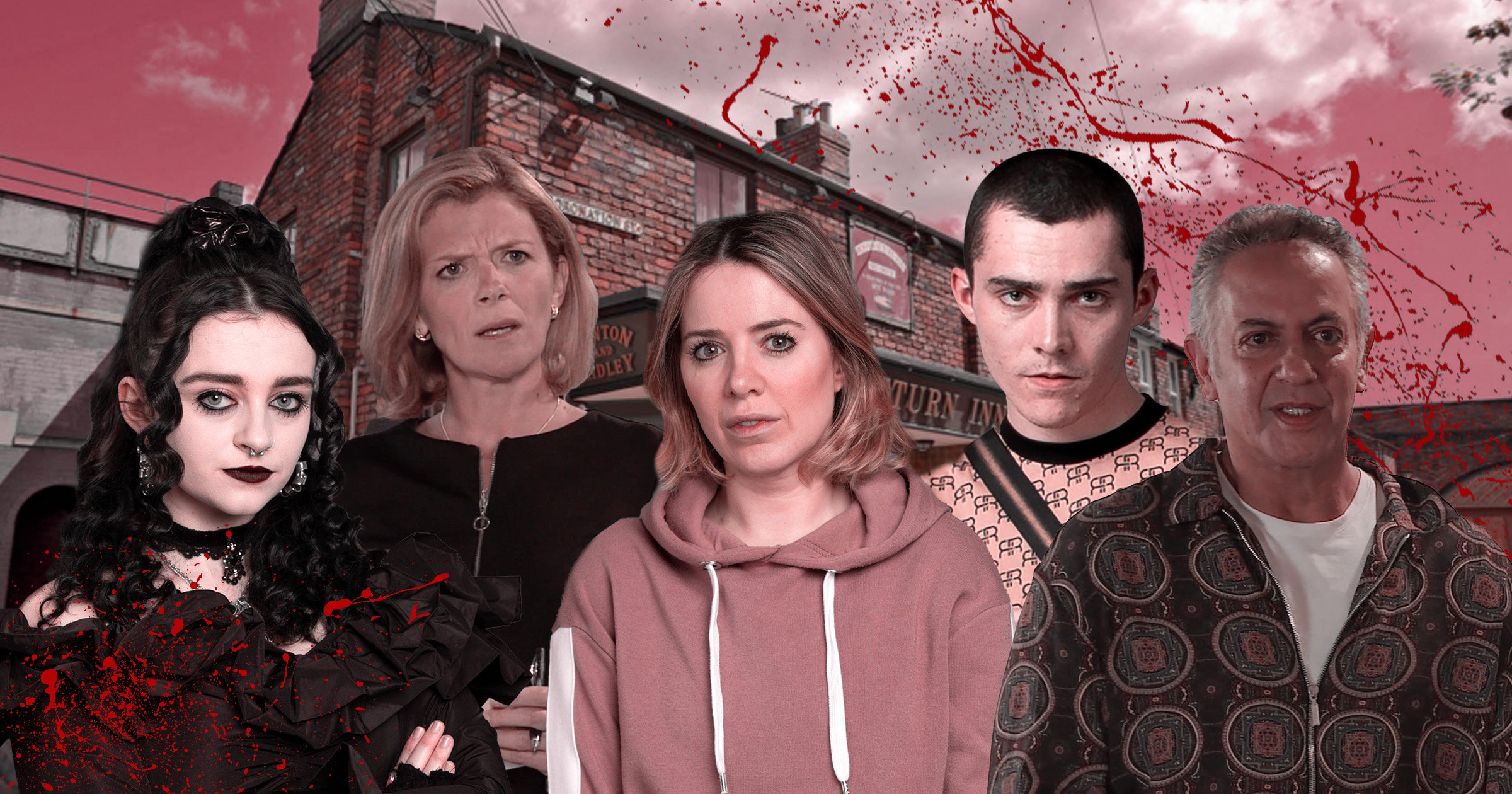 The countdown is on for one of the most action packed weeks ever of soap, with Coronation Street going full on Hollywood to explode a number of high profile stories.

There are many secrets to discover about the massive week. But there is a lot of information to tease just some of what is involved.

Here is all we know so far.

He may think he is cock of the walk at the minute (he is only one of those words) but Corey hasn’t got away with murder quite yet. Remember the backpack he chucked into the river on the night of Seb’s murder?

Turns out he was clocked by a nearby busker – who filmed the evidence on his phone. When confronted, Corey reacts with rage and shows his true colours.

Will he turn violent to silence the witness or will the busker sing like a canary to the police?

She is currently missing since the trial which saw her son’s killer walk free with a disgusting wink in her direction but it’s clear Abi will not give up on making him pay.

If the courts won’t do it for her, she decides to take drastic action and she spots Corey from afar and gets ready to strike.

Armed with a gun, Abi moves in for the kill…

Abi isn’t the only one wanting revenge and Mollie Gallagher has confirmed her alter ego will also play a part in the huge drama.

In coming episodes we will see Nina declaring her desire to kill Corey and she even contemplates running him down in her car.

By the time this week arrives, how far will she be prepared to go? Or will she hunt down a way to ensure Corey faces proper justice in prison?

Prison vans are notoriously easy to escape in Coronation Street – Tony Gordon and Rob Donovan would be proud of Harvey Gaskell as Will Mellor’s character has been confirmed for a return.

Seeking murderous revenge on Leanne, Harvey will head back to the Street after the van transporting him is involved in a brutal smash.

Will Leanne survive his last stand?

Caught in the crossfire of the prison van crash will be the Alahan family as they head for a break.

Jimmi Harkishin has been pictured on the scene along with a smashed up car which has collided with the prison van – and has also been carrying his kids Asha and Aadi.

Will everyone in the clan make it out of this?

Remember the short lived sinkhole in the Platt back garden? Well we have a sinking feeling that it will claim a life after all as it collapses again, causing devastation on the Street.

Who will be caught in the devastating carnage and how much damage will be inflicted on the community as lives hang in the balance and a rescue effort is launched?

The stunts will ‘rival the tram crash’

Bold words – but ones that seem to be shared by producer Ian MacLeod and actress Sally Carman.

The show boss and a number of key cast have really bigged up the week of stunts and action, calling them ‘epic’, ‘ridiculous’, ‘exciting’ and on a scale to ‘rival the tram crash’.

That’s a big claim but with everything on the table and the stories mapped out, we can quite believe it.

You didn’t think a week of crashes, escaped killers, sinkholes, guns and murderous intent would end with everyone unscathed did you?

Iain confirmed the death of a character – and there is every chance that more than one may bite the dust.

He seemed to indicate that the sinkhole will be the stage set for the fatality so it literally could be anyone.