'Alone Together' Film Review: Charli XCX Doc Is All About Singer's Fans

SXSW Film Festival: The film ostensibly chronicles the making of the singer’s last album, but it’s less interested in the artistic process than in community in a time of isolation 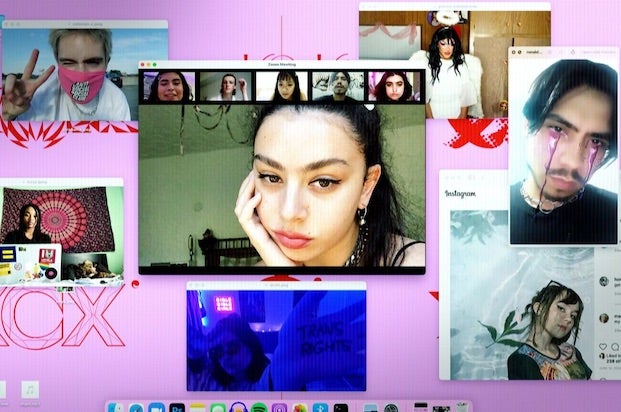 These are heady times for music documentaries. Questlove’s “Summer of Soul” won the audience and jury prizes at the Sundance Film Festival; docs about the Beastie Boys, Taylor Swift, the Bee Gees, the Go-Go’s, Tina Turner, Billie Eilish, Britney Spears and many others have gotten attention lately; high-profile narrative directors Peter Jackson, Edgar Wright and Todd Haynes have made recent or upcoming docs about the Beatles, Sparks and the Velvet Underground, respectively; and films on Tom Petty, Charlie XCX, Guy Clark and Poly Styrene are on the bill at the South by Southwest festival.

One advantage of docs like those has always been that they have a built-in, passionate audience of fans for the subject’s music – and in many cases, filmmakers aim their work at the devotees who will savor every detail and sing along with every word. I might embrace each nuance in “Bruce Springsteen’s Letter to You,” you might catch every offhand reference in “Beastie Boys Story,”and there might be enough of us that neither of those films needs to work hard to appeal to viewers who aren’t already fans (though there are pleasures awaiting them, too). Wright and Haynes no doubt want to use their films to make new converts for Sparks and the Velvets, but for many music docs that’s a luxury, not a necessity.

“Alone Together,” the Charli XCX film that premiered at SXSW on Thursday, falls into the category of a fan movie. But it’s not just a movie for the British singer-songwriters’ fans – it’s a movie about them, too. It’s a film that delves into an artistic collaboration between Charli and her audience, not between Charli and her fellow musicians. In the end, it’s as much a celebration of that audience as it is a portrait of the artist they love.

Directors Bradley & Pablo (Bradley Bell and Pablo Jones-Soler, music-video veterans making their first feature) came on board early in the pandemic, when the singer who was born Charlotte Emma Aitchison announced to her online fans that she was going to use the lockdown to make and release an album in five-and-a-half weeks. During the process, she announced on social media that she planned to share demos, rough mixes and the rest of the process with her fans, an avid community known as “Angels,” who had helped give her a huge LGBTQ following.

In the film, the announcement of her plan comes after an introductory section in which Charli essentially narrates a capsule version of her own history, doing so in a way that sounds a little rote but also touches on serious issues. “Even as I found success, I still felt lost and unfulfilled,” she says, setting up a theme of self-doubt and fragility that will run through the film. (She’s also the film’s executive producer.)

In her Zoom announcement of the album, Charli tells her fans, “I really need to be creative … to make sure my mental health is staying on track.” To document the process, she sets up multiple cameras in the Los Angeles home she shares with her boyfriend and two managers, while the directors also make use of extensive footage from and interviews with her fans.

The film jumps from songwriting to demos to fans to videos and back; as befits a project based around social media, it’s full of quick hits and jittery cuts to the point where nothing really has an impact unless you’re obsessive about the people onscreen. It’s a look inside an insular (but inclusive) community that will no doubt enrapture members of that community even if it doesn’t quite connect with those outside the community.

The story of making the album that became “How I’m Feeling Now” isn’t always laid out clearly: At one point Charli has only written two songs and says she’s so far behind schedule that she’ll never finish in time, but before you know it she’s done exactly that. “It takes a lot to say this, but I’m really proud of myself,” she says when she finishes the album, and it’s easy to wish that we knew more about what she actually did.

But the heart of “Alone Together” isn’t her process but her struggles with depression and doubt, and the way in which she and her audience shelter, encourage and even save each other. While you can view the film as a companion piece to “How I’m Feeling Now” that is mostly aimed at people who love that album, it also has moments where it transcends that to become is an intimate examination of community in a time of isolation. And in those moments, the film has an impact that reaches far beyond what it shows you about one artist’s music.