As the BBC marks its centenary year, Countryfile was dedicated to celebrating 100 years of farming. Adam Henson and Margherita Taylor visited Cogges Manor Farm in West Oxfordshire for the special episode. However, viewers could not help but feel the show paid too much attention to politics.

Countryfile went back in time for a special episode looking back at 100 years of farming.

The presenters explored all different aspects of farming life, from the roles of women to using horses to pull ploughs.

Margherita Taylor discovered how women would spend all of their time hard at work in the kitchen and they dominated this space.

Viewers were also taken aback by the beauty of the horses used for traditional farming methods.

However, people were divided over the reminiscent episode and they took to Twitter to share their thoughts. 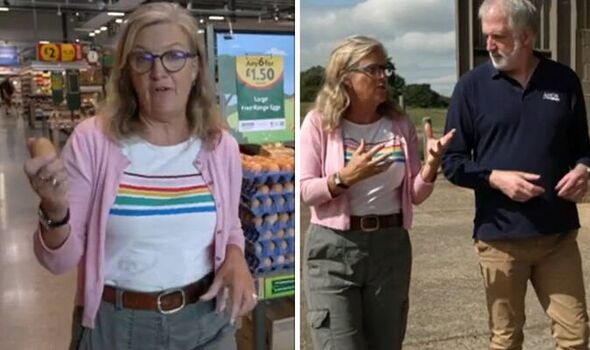 @SportingLife19 said: “#countryfile managing to make hundreds of years of farming tradition in to a feminism battle!

“I’m sure you’d struggle go find any farming couple who didn’t acknowledge they were a partnership.

“In farming it’s all hands on deck as needs must.” [Sic]

However, another viewer took the opposite view, saying: “If #countryfile intends to do exactly what it says on the tin, then we need more coverage of the impact of fuel prices, staffing shortages and the damage caused by Brexit on the rural economy.

Yet most viewers felt the special centenary episode was not the right place to discuss topics like Brexit.

@MarcusSavageK said: “#countryfile doing its usual political activism thing and forgetting it’s supposed to be a programme about the countryside @bbc just can’t help themselves.”

@MNaylor_ commented: “Interesting you can have a 10 minute report about the consequences of Brexit without using the word Brexit #countryfile”

@AodhBC shared: “Even on a programme like #Countryfile, where it’s central to many topics being discussed, the word Brexit seems to be on a BBC obscenity list.”

However, @ditasplaything appeared to appreciate how the topic was approached, saying: “#brexit has been awful on every single conceivable level #CountryFile.”

But Vicki interjected: “We have heard a lot of talk of protecting standards, we have seen the Australia deal.

“It doesn’t, and that’s because producers overseas won’t have the same rules that we have on pesticide use, on animal welfare, on environmental protection.

“So they will be selling here at a much lower cost undercutting our farmers, which is just not acceptable.”

Still, there were some viewers who enjoyed the centenary show, with old @cumbriaoldrural saying: “#Countryfile you are excelling yourselves tonight how wonderful to see these great #farmers using #horsepower as opposed to tractors. #priceoffuel.”

Countryfile airs on Sundays on BBC One at 7pm.