Deputy Leader of the Labour party Angela Rayner went onto this morning’s BBC Breakfast to chat about the party’s messaging ahead of the May elections. Charlie Stayt questioned her about the line “A vote for Labour is a vote to support our NHS” and what her government would do in terms of pay rise for NHS workers after the much-criticised one percent the Tory government has recently announced.

Rayner criticised the current government’s “broken promise” and said: “Our government would give our nurses and out NHS staff the pay rise they deserve.

“They deserve better than what the current government is offering them,” she added.

The presenter, however, wanted to know more and asked her: “The government says one percent, what would you say?” 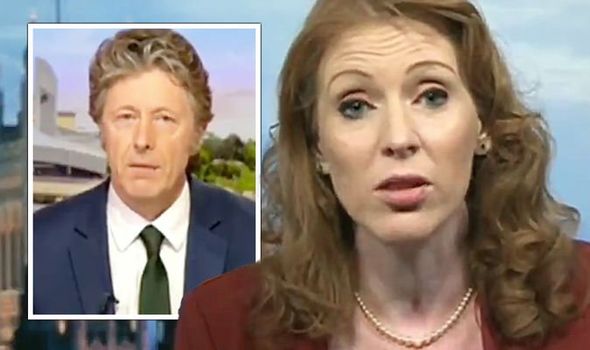 “At least give them 2.1 percent they promised that they legislated for,” she replied.

Charlie then asked her “Why would you reject someone like the Royal College of Nursing who say it should be 12.5 percent?”

“It’s not a matter of rejecting,” said the politician, to which the presenter interrupted her: “You are, you are saying you wouldn’t give them that.”

She then reiterated what the government actions have been so far.

“No, I know what they said,” said Charlie. “I am just trying to clarify why you are saying that you are the party that is behind the NHS.

“So why wouldn’t you as the Labour Party support the Royal College of Nursing’s demands for 12 percent?”

Taking about how the decision is made within trade union negotiations, the politician was interrupted again as the presenter asked: “I’m asking what you think.”

The constant interruptions didn’t go unnoticed by several irked viewers at home, who quickly took to the web to vent their frustrations.

A second echoed on Twitter: “#BBCBreakfast – Angela Rayner confirms #labourparty priority is a pay rise for NHS staff but isn’t sure how much it should be.