Mr Sunak appaeared via video link from a factory floor in Glasgow this morning to join Charlie Stayt and Naga Munchetty on BBC Breakfast. Stayt took the reigns of the interview, probing the Chancellor on the possibility of extending the furlough scheme, the ins and outs of the new ‘Eat Out to Help Out’ incentive and the newly released statistics from the Bank Of England on the economic repercussions of the coronavirus pandemic.

However, the chat between Mr Sunak and Stayt wasn’t exactly plain sailing throughout.

In fact, the pair found themselves clashing when discussing the furlough scheme and talking over one another.

With the plans set to run out in the coming months, Stayt asked: “Are there no circumstances in which furlough could not come back?” 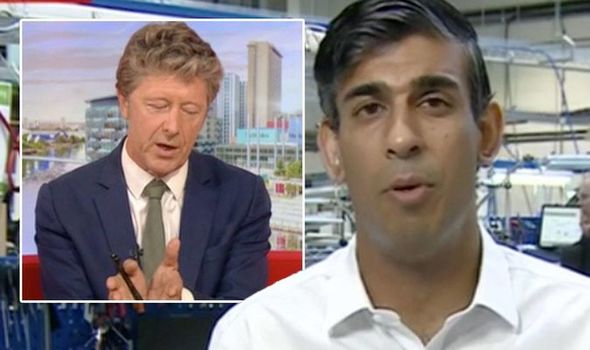 Before he could continue, Stayt interjected: “You understand why people have those concerns though? That is their life. If that is the situation,”

Mr Sunak could be seen continuing trying to speak but Stayt’s voice drowned him out.

And it didn’t take long for BBC Breakfast viewers to voice their opinion on the tense discussion, with many less than impressed.

Taking to Twitter, one fan wrote: “Is there anyone else as rude as Charlie Staight on @BBCBreakfast to politicians … talking over them repeatedly as they try to answer his questions.” (sic)

A second agreed: “@BBCBreakfast stop being so negative Charlie the government are doing there best and can’t answer most questions at this time.”

Another viewer weighed in: “@BBCBreakfast…. Charlie Stayt’s questions get worse…. They are long and convoluted…. he asks a question then butts in. We’ve watched BBC breakfast for years but going to find something else to eat my breakfast too.”

“@BBCBreakfast very embarrassing for them as Charlie Stayt talks over the Chancellor as he tries to reply to a question. The rudeness each day of the presenters on this program when speaking to Government Ministers is astounding,” added a fourth.

While a fifth added to the debate: “@BBCBreakfast ask about the 3 million do not let him waffle and run out of time! Let Naga take over at least she asks good questions.”