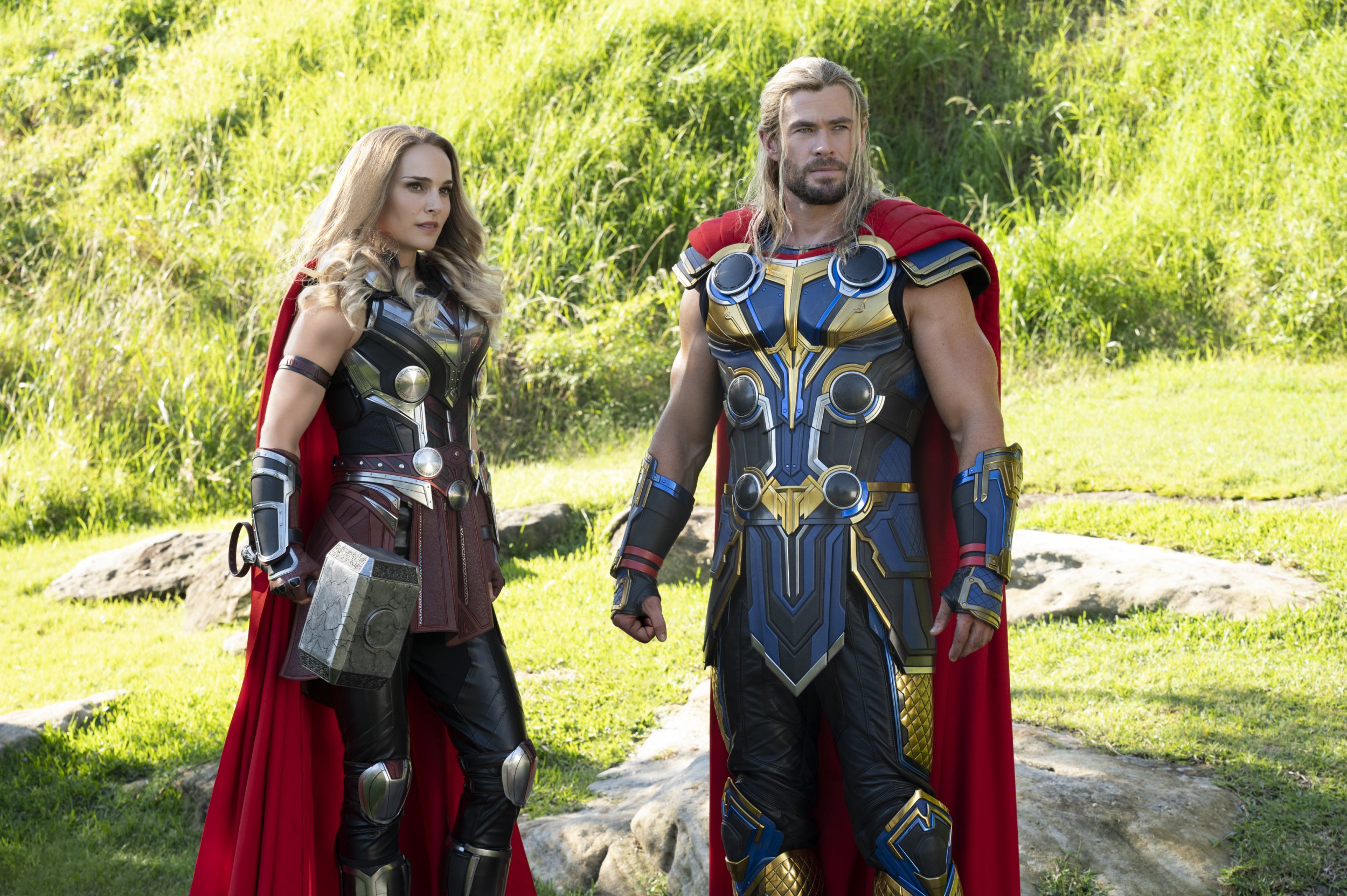 ‘It was definitely pretty radical,’ says Natalie Portman, who returns as Foster, adopting the new moniker the Mighty Thor. ‘I think Taika [Waititi, the director] and Marvel were like, “OK, so now you’re turning 40, let’s make you a superhero!”

‘Definitely unexpected that this would happen at this point in my life but very, very cool that it did.’

Portman is in London for the premiere of this latest Thor movie. So too is Waititi, who knocked it out of the park with 2017’s Thor: Ragnarok and does the same here on an exhilarating Guns N’ Roses-scored galactic adventure. Oddly, both have only now discovered that GN’R are currently touring the UK.

‘One of my big wishes is that they come see the film,’ says Waititi, sporting a flower-print jumpsuit and medallion. Portman agrees: ‘I definitely had a school folder that was a Guns N’ Roses folder!’ she giggles.

Before we all get taken down to Paradise City, there’s another thing that happened in London this past weekend: the LGBTQ+ celebration Pride. ‘I didn’t even know any of this!’ cackles Waititi, delighted by the fortuitous timing.

Portman recently agreed with a journalist who stated this was ‘the gayest movie ever made in the MCU’, from her Mighty Thor riding a Pride-coloured rainbow to Tessa Thompson’s returning Ragnarok character, the bisexual Valkyrie.

‘I feel like the attitude of the film is all about breaking boundaries and breaking the boxes that we put ourselves in,’ says Portman.

Thor himself, Hemsworth, Zooms in to chat to Metro from Australia, where he’s about to start filming Mad Max prequel Furiosa. He’s revelling in the Thor refit. ‘I feel like the character’s become more me over the years, in I hope a fun way,’ he says.

‘It’s all about having fun, embodying this space as a child would and enjoying all of it, and being caught up in the wonder and the fascination of all of it. And not getting bogged down in the serious nature that we can when making films.’

While Thor has a new opponent, Christian Bale’s immortal-killing Gorr the God Butcher, Waititi wanted an emotional arc for his lead.

‘[We said], “What do we want from Thor at the end of this film? What’s the thing that’s going to challenge a loner like this?”’ he says.

‘He’s basically looked after himself for thousands of years and never really had a committed relationship. If he’s asking the universe what his purpose is at the beginning of the film, I liked the idea that by the end it’s not what the audience expects the purpose is.’

There are plenty of surprises in Love And Thunder, including Russell Crowe as Zeus. And what about the naked Thor glimpsed in the trailer? Did Hemsworth take persuading to bare all? ‘No!’ cries Waititi. ‘I think if you’ve got a body like that, it’s not gonna take much persuasion.’

Best of all, adds Portman, are the young girls at the premieres dressed up like the Mighty Thor. ‘It’s incredible to be part of this phase of the MCU where there are so many female superheroes,’ she says. ‘I feel like when I was a kid there was, like, one, and you would have to identify with that one as that was the girl.

‘Now you can choose who you identify with based on their personality, not just your demographic!’ The times – especially in the MCU – they are a-changing.

Played By: Christian Bale (The Dark Knight, The Fighter).

MC-Who? Supervillain out to kill all the immortals.

He says: ‘I think in Gorr, they looked for an actor polar opposite [to Chris Hemsworth]. Someone not relatable, a bit of a loner, creepy, someone
no one wants to be around, and nobody wants to see his ass. And so
I think they went, “Yeah, we found it in Bale.”’

MC-Who? The King of New Asgard.

She says: ‘We talked about the idea of someone that has a job that they really love but they’re also kind of disgruntled. She was a professional soldier for thousands of years and now finds herself kind of stuck in bureaucracy. She’s really missing being on the battlefield and missing her sisters.’