Constance Wu is going to have a job this fall, but she doesn’t sound too happy about it. Following the news that the news that her ABC comedy series “Fresh Off the Boat” will be returning for a sixth season on ABC, the “Crazy Rich Asians” star posted a series of Twitter updates Friday afternoon that indicated her displeasure.

Her initial comments — “So upset right now that I’m literally crying. Ugh. Fuck.” and “Fucking hell.” — were followed by a response to a Twitter follower congratulating her on the show’s renewal: 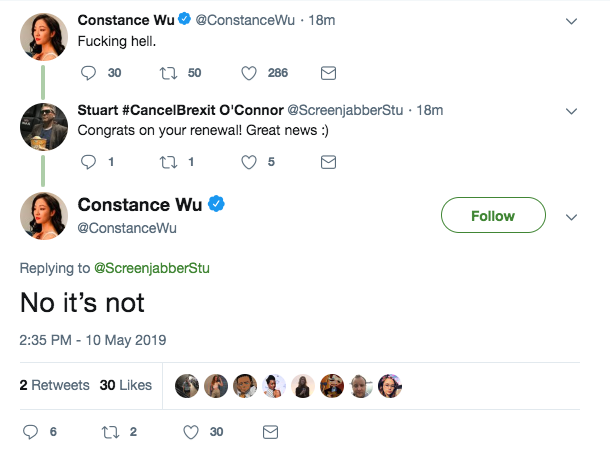 UPDATE: Beyond Wu’s tweets, as reported by TVLine the actor also commented “Dislike” on the ABC Instagram post announcing the renewal news. The “Dislike” comment has since been deleted, as well as Wu’s “No it’s not” reply, with Wu posting the below follow-up:

“Fresh Off the Boat,” based on the memoir by Eddie Huang, features Wu and Randall Park as parents raising three young boys in Orlando, Florida. The series was moved to Fridays this year and experienced a ratings decline in its new time slot but still performed decently for ABC. It’s also now, following the Disney/Fox merger, a show owned fully by the network (it’s a 20th Century Fox Television production).

However, series creator Nahnatchka Khan is leaving the show at the end of Season 5, per her new exclusive deal with Universal Television, and Wu also is poised to make the leap to a film career, with a big role in Lorene Scafaria’s upcoming “Hustlers” and an option to appear in the “Crazy Rich Asians” sequel.

IndieWire recognized Wu at our 2018 IndieWire Honors event following the success of “Crazy Rich Asians.” Prior to her breakout role in “Fresh Off the Boat,” Wu’s career included roles in the 2011 film “Sound of My Voice,” the Starz series “Torchwood: Miracle Day,” and Adult Swim’s “Childrens Hospital.”

ABC had no statement on Wu’s comments as of Friday afternoon. IndieWire has also reached out to Wu’s representatives for further comment.