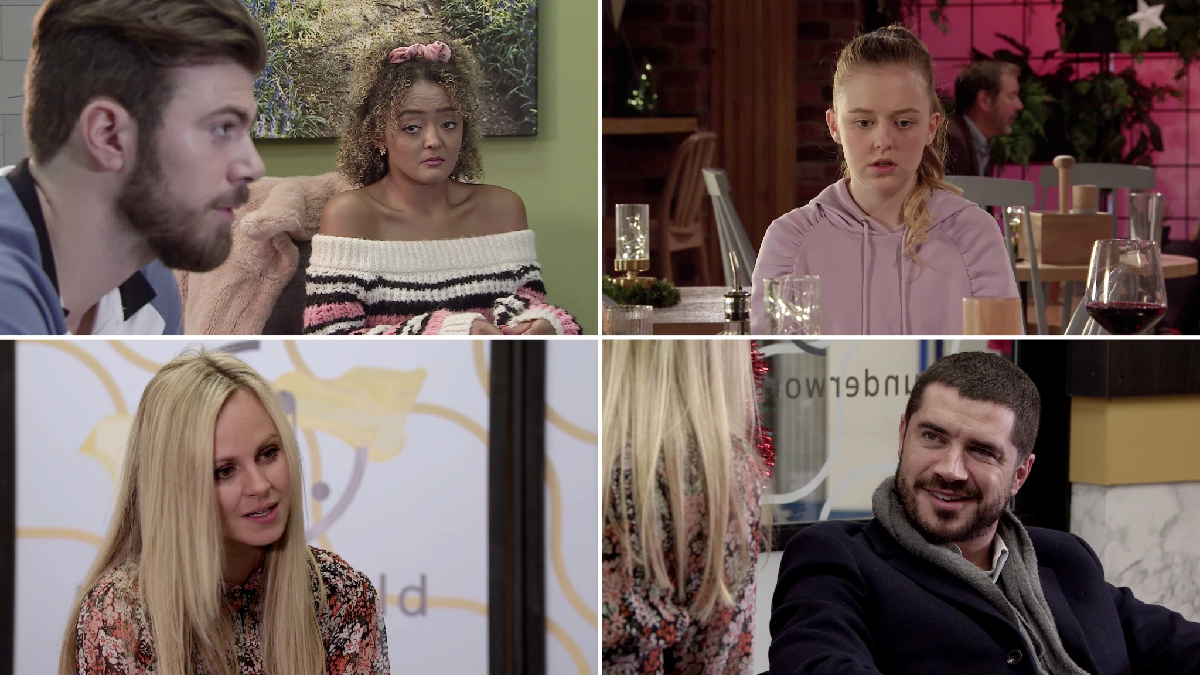 Emma Brooker (Alexandra Mardell) is in for some painful truths in Coronation Street as her groom to be Curtis Delamere (Sam Retford) confesses that he isn’t ill at all. And when Steve McDonald (Simon Gregson) entrusts him with transferring Oliver’s fund, will he commit more betrayal?

Summer tries to apologise to Daniel but she’s hurt when he reveals that he’s not allowed to talk to her. At school she watches Daniel fly out of his classroom and is horrified to see the word ‘paedo’ scrawled across the board.

As Zeedan sets about redecorating Speed Daal, he’s shocked by the arrival of his estranged wife Marrium.

Fed up with Adam’s reputation as a ladies’ man, Sarah questions him over how many women he has actually slept with.

Sally asks Maria to say a few words about her clean air campaign at the press interview later. Maria’s buoyed by Sally’s belief in her.

As Emma babysits Hope and Ruby, she goes to switch off Curtis’s TV Doctor DVD but is puzzled to hear the doctor using the same phrase Curtis used when tending to Harvey on the night of the storm.

As Emma and Gemma discuss the coincidence, they’re horrified to realise that Ruby has swallowed one of Curtis’s pills. At A&E Emma shows the doctor Curtis’s pills, explaining he suffers from a heart condition. The doctor confirms that Ruby’s fine as the pill she took was only a vitamin. Emma’s confused.

Back at home, a shell shocked Emma assures Tyrone it was a false alarm and Ruby just swallowed a vitamin tablet.

Curtis returns home making out he’s exhausted after his run. Emma confronts him with the pill box and demands answers. Will Curtis come clean?

As she looks at photos of Daisy, Summer feels frumpy. In a bid to cheer her up, Billy takes her to the Bistro. But having eaten a burger, Summer feels guilty. Oblivious to her fragile state, Billy assures her she’ll smash her Oxford interview.

Zeedan convinces Marrium that her dad started the fire as an act of revenge.

Sally waxes lyrical to the journalist, painting herself as a game-changer whilst belittling Maria’s cleaner air campaign. Maria’s seething. Gary reckons she should put herself up for election and give Sally a run for her money.

After a successful meeting with Gavin’s PA, Lydia, Sarah invites her for a drink. Seeing Adam, Lydia glances at him with recognition.

Sarah meets up with Lydia and her son, Finn, and introduces them to Adam. Lydia pales and alluding to the fact that she had a relationship with him at uni, makes her excuses and leaves. Under Sarah’s steely gaze, Adam admits his relationship with Lydia was years ago and he can’t really remember. Sarah’s unimpressed.

Marrium asks Zeedan for help while Audrey arrives in a neck brace having had another car accident but still in denial about her eyesight.

At the hospital, Emma quizzes Dr Handley about Curtis’s condition, but he refuses to be drawn.

Frustrated, Emma calls Neville. As she grills him about Curtis’s illness, will Neville tell all?

Sally agrees to lend her support to a new housing development outlined for the Red Rec if elected. Having been promised first refusal on the show home, Maria’s incensed. As Sally prepares for her election Q&A, Maria steams in and tells her she’s withdrawing her support and going to run for council herself. Sally’s horrified

Hanging his head in shame, Curtis finally admits that he’s not dying, explaining to Emma how he first feigned illness when his parents were getting divorced, enjoyed the attention but once he’d started, he couldn’t stop.

When Emma asks about his medical training, Curtis admits that was a lie too. Asserting she’ll never be able to trust him again, Emma orders Curtis to pack his bags. But before she can share her news, Steve tells her about the £4k Curtis raised and how they want to thank him. Will Emma have a change of heart?

Sally tries to talk Maria out of her decision, asserting she has no experience but Maria sticks to her guns, pointing out she has integrity instead. With the Q&A under way, Maria forces Sally to explain how she was imprisoned during her mayoral career. Smarting from her humiliation, Sally vows to beat Maria at her own game.

Adam and Sarah row over his past infidelities but suddenly Sarah’s phone beeps to remind her she’s ovulating. Sarah drags him home.

As Zeedan and Marrium look through the family’s paperwork, Marrium tells him that she doesn’t hate him anymore and he’s still the decent man she married.

Tp Gail’s relief, Audrey accepts that she needs to book an eye test but is scared of losing her independence.

Kelly’s forced to admit to Gary and Maria that she’s been letting Stu sleep in the barbers as he has nowhere to go. Determined to help Stu, Kelly asks Billy and Yasmeen about hostels. Yasmeen forms an idea.

Later, Stu thanks Yasmeen for the offer of a room, but when he makes a joke about his high cleaning standards, how will she react?

At the same time, as Kevin and Abi arrive back from their honeymoon, Kevin hopes they don’t bump into Kelly.

As Tim and Gary share a moan about their ambitious wives, Tim lets slip that Weatherfield County are proposing to build a new training ground. When Gary whips out his phone and calls Maria with the news, Tim’s fuming.

Maria asks James if he’ll endorse her election campaign, but he refuses, explaining that all County players have been instructed not to get involved with any political campaigns about local developments. Maria and Phill smell a rat.

George asks Gail for help with a Christmas present idea for Eileen.

Ken’s hurt when Adam says that he and Sarah are thinking of spending Christmas alone. Gail tells David that Audrey’s suffering from cataracts and will be moving in until she’s recovered. Sarah suggests a joint Platts and Barlows Christmas so not to offend anyone.

Emma accompanies Curtis to his appointment with the psychologist. Emma listens, overwhelmed, as Curtis explains how he has spent years convincing people that he’s dying as he enjoys the attention.

Curtis assures Emma that he intends to get better, he loves her more than anything and tomorrow could be the best day of their lives. Will Emma agree to go ahead with their wedding plans?

Emma explains to Amy that Curtis is suffering from a factitious disorder and he’s seeing a psychologist. Amy’s astounded and insists she can’t marry him and must tell the family the truth.

Unaware of Curtis’s lies, a drunk Steve hands him his bank card and PIN, asking him to transfer the £100k they raised to Oliver’s charity account. At home Curtis opens his laptop and takes out Steve’s bank card.