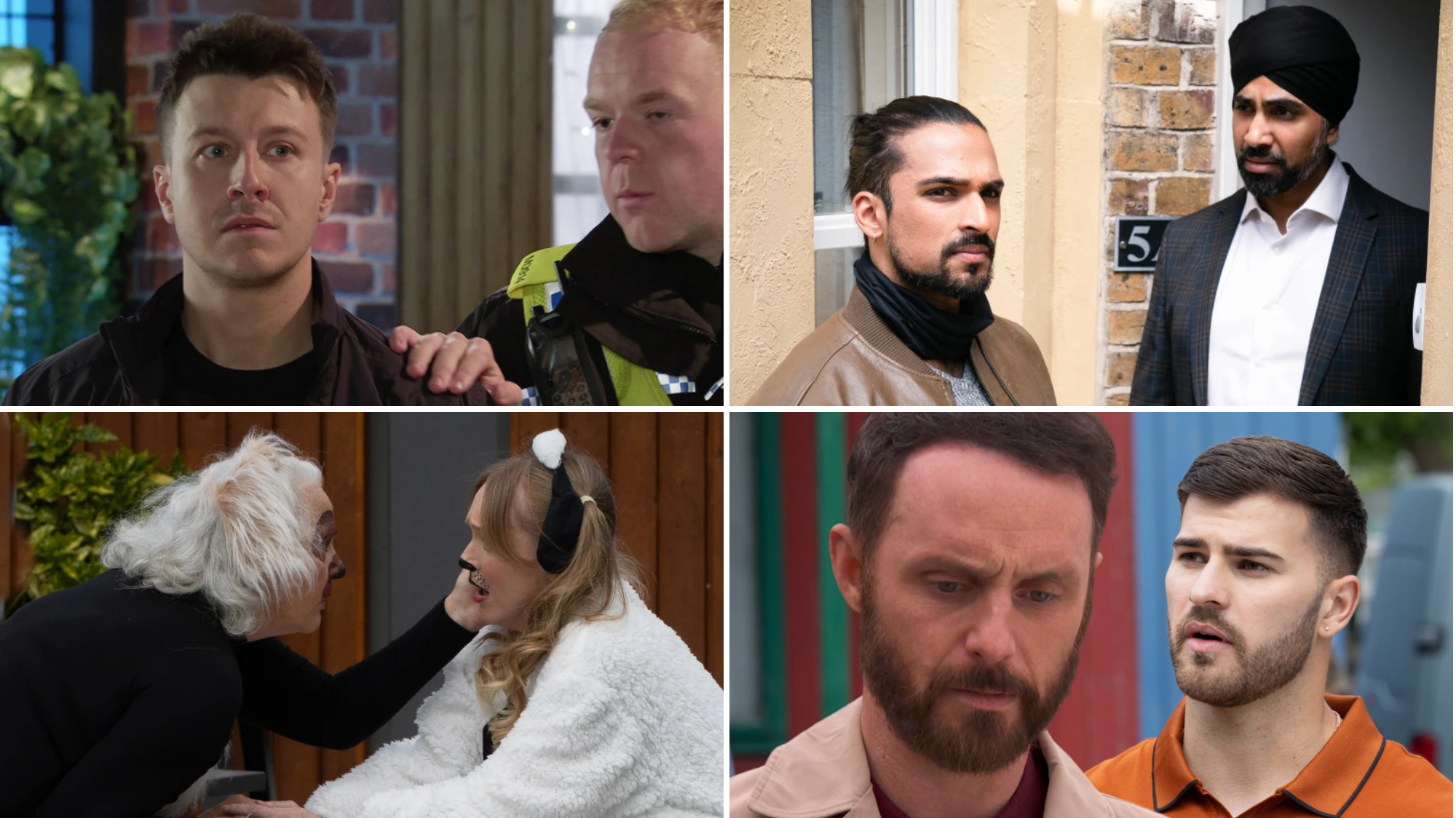 There are shocks and surprises in store for a number of soap’s finest next week, as some make huge decisions, while others face the music.

Ryan Connor finds himself being taken away by the police in Coronation Street, after a scheme he cooked up with Debbie Webster backfires rather dramatically.

EastEnders, meanwhile, sees the arrival of Ravi Gulati, and his presence in Walford leads to quite a few interesting developments.

Over in Emmerdale, Mary Goskirk makes a move on Vanessa Woodfield after misreading the signals, while Hollyoaks sees a surprise reunion on the cards for two village favourites.

We thought so too, and therefore we’ve picked out all the must-see moments for your enjoyment.

Debbie instructs Ryan to stage a break-in at the bistro so she can make a claim on the insurance. He fuses the electrics, and later assures Debbie that the cash is stashed in his bedroom. Later, Leanne is horrified to discover all the money gone.  Debbie orders Ryan to call the police.

Craig questions Debbie, Leanne, Nick, and Ryan about the break-in. Ed reveals that the CCTV has a back-up circuit and won’t have been affected by the power cut. Leanne, Nick, Debbie and Ronnie later watch the footage back, and they discover that Ryan is the perpetrator. Ryan is arrested on suspicion of theft.

Glenda arrives and, clocking George asleep in the back of the funeral car, quickly takes charge of the proceedings. As Glenda, Todd and Sean celebrate how well the funeral went, George arrives.  He’s thrilled to see his sister and introduces Glenda to Eileen.

Ben turns to Tez for drugs, but a concerned Sam spots the exchange and tells Ben to pull himself together. Ben heads to a party to find James, but as he takes more and more drugs, James sends him home. Realising that he’s late for Lexi’s dinner, Ben leaves her an emotional voicemail and says he’s on his way, but he collapses.

Kathy, Callum and Jay rush to find Ben and their worst fears come true when they find him with no pulse. The paramedics rush him to hospital but can they save him?

Sam is on edge as Phil ignores her calls and she instructs a guilty Zack not to tell anyone about the drugs. Sam warns Jonah the dealing has to stop, but Phil soon confronts her, as he reveals that he knows all about the drugs!

Ravi makes an entrance to the Square and immediately riles Stacey as he flirts with her. As Phil chats with Sharon, he spots Ravi and has an idea.

Suzy is stunned to see Callum in the village, and asks him if Leyla is still taking drugs. Matty, meanwhile, watches from afar, convinced he’s witnessed a drug deal, and later he secretly searches Take A Vow, finding a large holdall of drugs! Determined to make Suzy take responsibility for her actions, he plants the holdall full of drugs in Suzy’s car, and later, he calls the police and reports her!

Faith explains got Nate that she plans to take back something that belongs to her from her step daughter’s home, but when a man named Angus – who lives in the house – realises who she is, he kicks her out. Determined to succeed, Faith dresses up in a disguise, and successfully gains entry to Angus’ home, before making off with his stolen bag – much to Cain and Nate’s horror!

Mary opens up about her sexuality to Vanessa but Mary mistakes her kindness for something else and leans in to kiss her.

Romeo and Prince are all ears when Zain mentions a real-life superhero, who is known to his fans as ‘The King’, who reunites missing people with their families, but he proves rather difficult to locate, causing a bit of a problem.

Romeo therefore enlists Zain’s help in tracking down ‘The King’, as they throw their impromptu soup kitchen in the hopes this mystery legend shows up. Their plan seemingly proves a success, as the jacket of an attendee gives the game away, and it looks like they’ve found their man.

Donna-Marie has another trick up her sleeve, and as Romeo and Prince’s outdoor broadcast gets underway, an emotional reunion takes place, when a secret identity is publicly revealed.