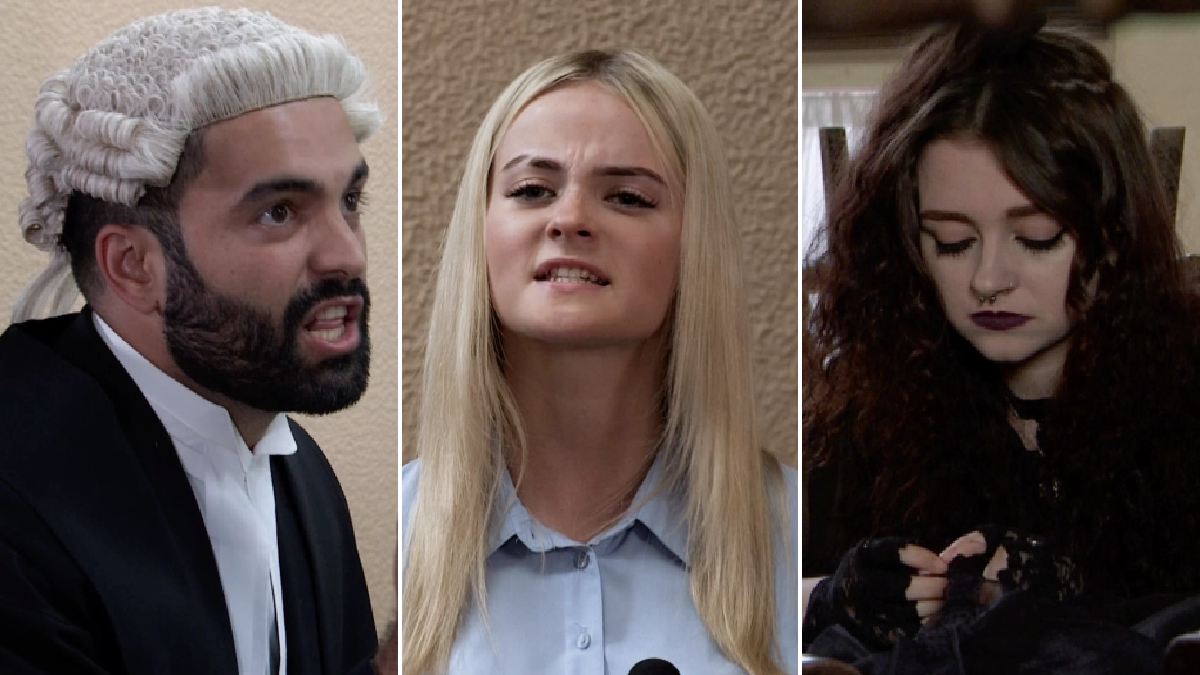 The word ‘unmissable’ gets thrown around all too often these days, but it’s ideal in describing next week’s Coronation Street.

The ITV soap is hot off one of its greatest weeks in recent memory, as Corey Brent (Maximus Evans) and Kelly Neelan’s (Millie Gibson) trial commenced.

Both teens were implicated in the attack on Seb Franklin (Harry Visinoni) and Nina Lucas (Mollie Gallagher), which resulted in the former’s death.

Nina took to the stand this week, reclaiming her identity in powerful scenes, as she told the court that Corey kicked Seb to death – not Kelly, like Corey and his pals are making out.

Abi Franklin (Sally Carman), meanwhile, was given reason to believe that Corey’s dad Stefan (Paul Opacic) had paid off witnesses in order to give false testimonies, hoping that this would secure Corey his freedom.

Imran Habeeb (Charlie De Melo) went to extreme lengths in the hopes of ensuring that Kelly walks free, but ex-wife Sabeen (Zora Bishop) is proving quite the force to be reckoned with!

It’s a week that will live on in our memories for quite some time, that’s for sure, but there is plenty more drama on its way, as next week will not only see the trial continue, it will see it conclude, as the jury reaches a verdict!

If you’re struggling to wait until Monday for your next slice of cobbles action, then fear not, as we’ve got four preview clips from next week’s episodes to tide you over until then!

Worth noting that there are only four episodes next week, with two airing on Monday and two on Friday.

Sabeen cross-examines Kelly, asking her about why she felt the need to share Asha’s naked video online last year. Kelly admits that she feels incredibly guilty about what she did.

In a shocking move, Sabeen suggests that if she was willing to destroy her best mate’s life to impress Corey – not to mention slap Nina – then its possible that she would be able to kick Seb to death to impress him!

Eileen is livid in the wake of discovering that the ashes of imaginary Patsy Freeman are actually Pat Phelan’s!

She wants nothing more to do with George, but George is adamant that he wants to make amends, explaining that he will dispose of Phelan’s ashes in any manner she sees fit.

But just what she got in mind?

Imran is devastated in the wake of Laura’s testimony, telling her that he should’ve listened to his instinct and kept her out of the proceedings.

Roy shuts the cafe ahead of the verdict, desperate to support Nina. Nina, meanwhile, stitches together a veil, explaining that she intends to wear it to court when the verdict is revealed, as a reminder that this trial is about her beloved Seb.

Dev pops by and gives Roy a lucky charm from Asha, which he wants him to give to Nina.