In its most recent quarterly earnings report, Disney announced that the number of Disney Plus paid subscribers swelled to 116 million as of July 3. Wall Street noticed, as one headline from a financial publication shouted, “Disney Stock Leaps After Earnings Blowout.” Since the introduction of Disney Plus on Nov. 12, 2019, Disney shares price has climbed from $138 to $177 as of Aug. 23.

Wall Street always wants more, and Disney will be addicted to increasing subscriptions even if it means sacrificing theatrical revenue. That’s because math favors Disney Plus. The revenue generated by the 116 million Disney Plus subscribers, at a discounted monthly subscription fee that averages $4.16 each, will generate $5.79 billion annually. This surpasses the $4.73 billion revenue that Disney achieved in 2019 from theatrical distribution. And Disney Plus is still in its infancy. This is in addition to the revenue generated by Disney’s nearly 42.8 million Hulu subscribers and 14.9 million ESPN Plus subscribers.

One chart reveals how Disney has fueled its Disney Plus subscriber addiction by expanding internationally while providing a continuous flow of direct-to-consumer films and series. 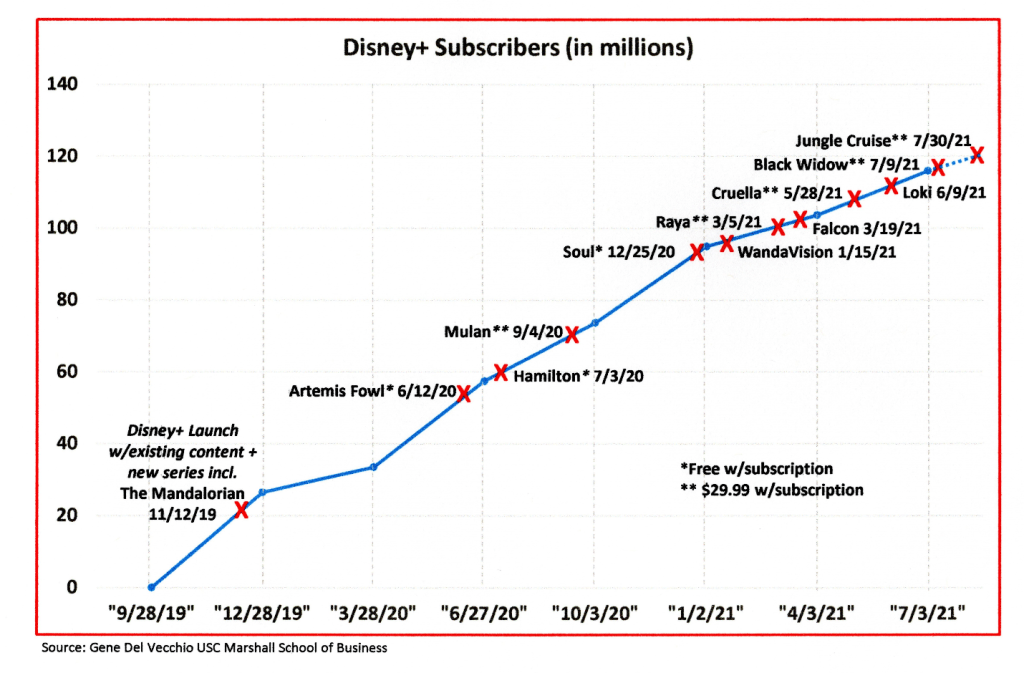 By Dec. 28, 2019, Disney Plus had quickly amassed 26.5 million subscribers using existing content and marquee new shows including “The Mandalorian.” By March 28, 2020, Disney Plus had 33.5 million subscribers, a sizable 26.4% increase. But after Disney began a European expansion on March 24, 2020 (including the U.K. and Germany), coupled with announcements that movie that had been intended for theatrical release — “Artemis Fowl” and “Hamilton” — would be direct-to-consumer, subscribers grew to 57.5 million by June 27, 2020. This was a whopping 71.6% increase.

The international expansion and direct-to-consumer enticements shifted the trajectory of subscriptions significantly upward as noted in the chart above. The new trajectory influences Wall Street expectations and reflects Disney’s addiction. This has significant implications for Disney, audiences, theaters and talent.

To keep the trajectory on the same incline, Disney continued its 2020 international expansion which included India in April, more of Europe in September, and South America in November. This was in parallel with new direct-to-consumer offerings that included “Mulan” in September and “Soul” in December.

Gaining new subscribers quickly, even at the expense of box-office revenue, was critical in 2020 because households were likely to subscribe to only three to five streaming services – the average is now four. Keeping current subscribers happy with marquee, direct-to-consumer content is also important so that they do not drop the service. The monthly active churn rate for Disney Plus at year-end 2020 was reported to be only 4.3% compared to Apple TV Plus (15.6%), Peacock (9.5%), and HBO Max (6.7%). Only Netflix at 2.5% beats Disney Plus. Consumers got the message in 2020, that Disney Plus is a place to see first-run films and new, must-see series.

Efforts to stay on the same trajectory in 2021 with an array of offerings that included “WandaVision” in January through the Disney Premier Access release of “Jungle Cruise” as a simultaneous theatrical and $30 paid download release via Disney Plus in July.

But the slope of total subscriptions started to tilt downward by March of 2021, suggesting that markets might be reaching early signs of saturation, making it harder to entice more signups. If the curve flattens further, Wall Street will sour, the stock price will drop and Disney would be motivated to employ other tactics to boost the curve upward again. These might include clamping down on password-sharing, continuing to premiere series and some films exclusively on Disney Plus, reducing the length of theatrical windows for films that premiere exclusively in theaters, spending more on marketing, and instituting systematic price increases. All streaming services will be motivated to do the same.

Price increases aside, Disney’s addiction to streaming is good news for consumers because the company will be driven to keep them happy. It will continue to do so using four tactics: Giving Disney Plus subscribers an exclusive, free perk for non-tentpole films (e.g. “Hamilton”), giving subscribers exclusive access to blockbusters for an added fee (e.g. “Mulan”), launching films simultaneously in theaters and on Disney Plus to give audiences a choice of platforms (e.g. “Jungle Cruise”), and reducing the theatrical window for films that premiere exclusively in theaters (e.g. 45-day window for “Free Guy”). This empowers audiences by allowing them to see a film when they want, on a platform they want, and at a price that fits their budget. Audiences will expect this to continue and will become addicted to having choices.

For theater owners, Disney’s addiction to streaming is dire news. In a July 18 news press release, the National Association of Theater Owners claimed that “Black Widow’s” simultaneous launch in theaters and on Disney Plus cost Disney revenue, stating that the film could have opened between $97 million to $130 million on its first domestic weekend but instead did only $80 million. NATO also noted that the film then suffered a massive drop on second weekend. Yes, Disney made less money on the box office, but Disney’s new business model makes more money by selling one more subscription than it does by selling one more ticket. Studios with company-owned streaming services also have greater leverage over theaters to dictate terms. This is likely to result in anemic theater revenue, income losses, potential bankruptcies and greater consolidation.

NATO chief John Fithian asserted last week at the organization’s annual CinemaCon gathering in Las Vegas that “simultaneous release does not work for anyone.” He’s wrong. It’s one tool that studios will use to gain and retain subscribers, raising revenue now to enjoy massive profits later.

For A-list talent, Disney’s addiction has made for a bumpy road. “Black Widow” star Scarlett Johansson is suing Disney for what the lawsuit calls “a promise” that the latest entry in Marvel’s MCU would get a theatrical release.

New contracts need to compensate talent in a manner that is equal to what they would have received under the old contracts. From Ms. Johansson’s standpoint, that means a reported $50 million bonus on top of the $20 million she has already received. To achieve this, contracts need to acknowledge four potential components: a base fee, a performance percentage of the box office, a performance percentage of the premium video-on-demand receipts, and potentially an added boost for incremental subscription revenue generated by households that signed up to watch the new film.

The last component is trickier to ascertain, yet can be valuable because it represents an ongoing residual fee based on subscribers’ lifetime value. Because these four components can get complicated, Disney might take a page out of the Netflix playbook and just pay a bigger fee upfront with no performance-based pay whatsoever. Interestingly, while some talent agents have expressed concerns that Disney’s growing influence will put talent at a disadvantage during negotiations, Johansson’s lawsuit probably motivated Disney to offer Emma Stone a more lucrative deal for a “Cruella” sequel.

After the disruption settles and the industry reaches a new equilibrium, studios and consumers will undoubtedly come out as winners. Talent will probably break even. Theaters will lose. And while some may think that this was a result of the pandemic, these events were already in play because theatrical windows were already shrinking pre-COVID, consumers were already revealing a strong preference for streaming, and studios were already creating their own streaming services. The pandemic simply made the future arrive earlier, thanks to Wall Street’s expectations and Disney’s addiction.

Gene Del Vecchio is an entertainment consultant and researcher and an Adjunct Professor at USC Marshall School of Business, where he teaches entertainment marketing. He is the author of 2012’s “Creating Blockbusters!”