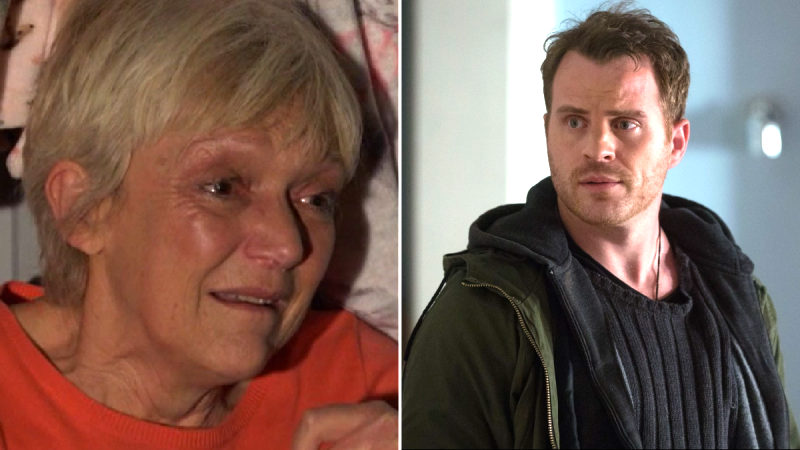 You never know when you tune into an EastEnders episode whether Sean Slater is just going to pop up, either in person or across a video call.

Rob Kazinsky has reprised his role on a couple of occasions during Jean Slater’s (Gillian Wright) storyline over the last months.

In November, he turned up to check up on Stacey (Lacey Turner) after her prison release – and he wasted no time in trying to suss out any dodgy intentions from her wife Eve (Heather Peace).

And back in April, he was seen on a video chat to check in on Jean as her mental health started to deteriorate.

Fans will recall a humorous quip from Stacey who hit out at his failure to appear face to face as she said: ‘You’re quick enough to turn up when you think I’m a lesbian!’

Tonight, a mental health assessment on Jean concluded that she needed to return to hospital to continue her recovery.

She had previously been admitted after fleeing to Southend in a wedding dress and then submerging herself in the ocean.

She was unhappy on the ward and a reluctant Stacey brought her mum home but subsequent incidents have shown that the time is not right.

Lily had taken some of Jean’s medicine when her gran had indicated that she was going to get bipolar herself.

And earlier this week, Stacey was rushed to hospital after collapsing with a suspected infection after cutting herself during an altercation with Jean during a manic episode.

With recent events hitting home, a devastated Jean locked herself in the bathroom but eventually decided that it was right that she return to hospital.

Despite Stacey’s pleas, a distressed Jean left with the mental health worker but not before tempering fans’ expectations that this would lead to Sean reappearing.

Jean specifically instructed Stacey to tell Sean not to come and visit but we reckon that was for us more than it was for Stacey.

At least we don’t have to eagerly wait for a glimpse of the popular character only to be disappointed.