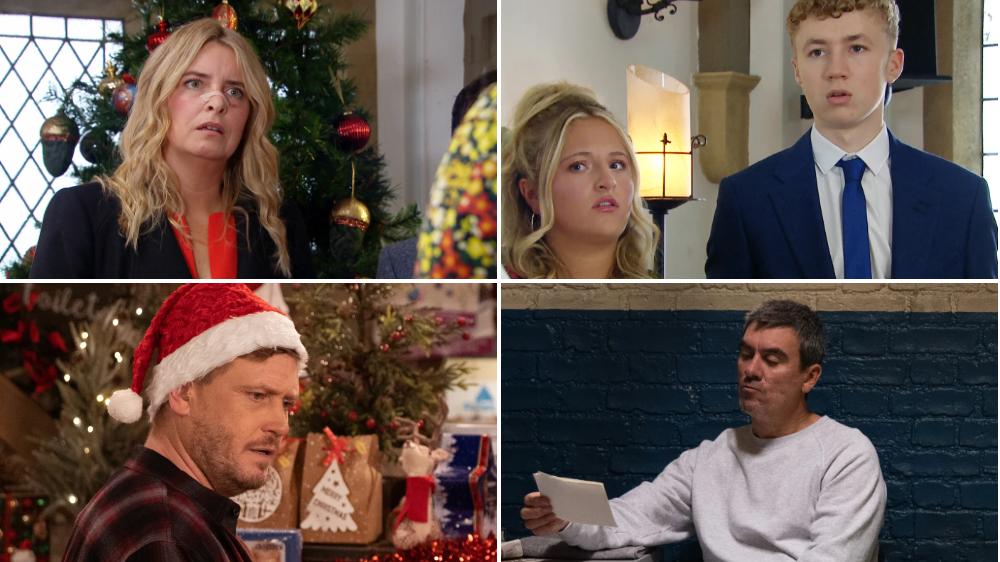 Tensions are rising for the Dingles in next week’s Emmerdale, as Cain Dingle (Jeff Hordley) is plagued by secret calls and letters ahead of a huge blast from the past this Christmas.

And Charity (Emma Atkins) triggers a violent showdown at the christening of baby Esther, as she comes to blows with Amy Wyatt (Natalie Ann Jamieson).

Elsewhere, Christmas is shaping up to be miserable for some as Chloe Harris (Jessie Elland) faces being homeless, and David Metcalfe (Matthew Wolfenden) could lose everything.

Here is your full episode guide for next week.

It’s baby Esther’s christening and Amelia is touched by Noah’s support. As Charles begins the christening at the church, Charity’s feud with Amy threatens to put the service in jeopardy.

The christening is derailed when Charity and Amy can’t refrain from arguing and soon it gets physical. PC Swirling witnesses the debacle.

Marcus is alarmed to hear Greg is coming for lunch and makes an excuse to Ethan. Later, Marcus has a change of heart and joins him but could he regret this?

Chloe attempts to get Amy to see reason over her false police statement, worried Charity could go to prison.

Ethan and Marcus continue looking for their own place.

Chloe lies to Amy that she has got a place to stay, but the reality is that she has nowhere to live over Christmas.

Nate becomes increasingly suspicious on seeing Mackenzie’s reaction when Chloe leaves. Will Nate put two and two together and figure out Mackenzie is the father of Chloe’s baby?

Amelia suggests to Ethan and Marcus that they buy Harriet’s house.

Charles’ choir event is raising money for a stroke charity. At the village hall, the members of the choir begin singing as everyone enjoys the music, food and drink.

Amy and Moira manage to lose sight of Kyle and see him speaking to PC Swirling about Cain.

A prison officer hands Cain some letters from someone who has been writing to him frequently. Once the prison officer is out of sight, Cain stares at the letter for a moment then rips it up.

Manpreet is determined to make a Christmas to remember.

Rishi invites Liam to spend Christmas. Liam wonders if he has bitten off more than he can chew.

Leyla hides that she will be alone this Christmas.