Fear the Walking Dead, Season 5, Episode 5 recap: The End of Everything

We’re down to the last few episodes of Fear the Walking Dead before the mid-season break and things are not only getting interesting, but they’re getting personal…

We’re back at the night that Althea (Maggie Grace) returned to the plane wreck to check out the mysterious person in black and got zapped.

We pick up there where she wakes up and sees the other person in black covering their dead partner in what looks like magnesium and burning them to the quick. Al grabs her camera and runs for it.

She dashes through the trees; she loses a boot in the mud; she offs a couple of zombies at a stream. And then she is corned by walker — at which point they’re all shot and she’s knocked to the ground by a woman (Sydney Lemmon) — the same one who zapped her. 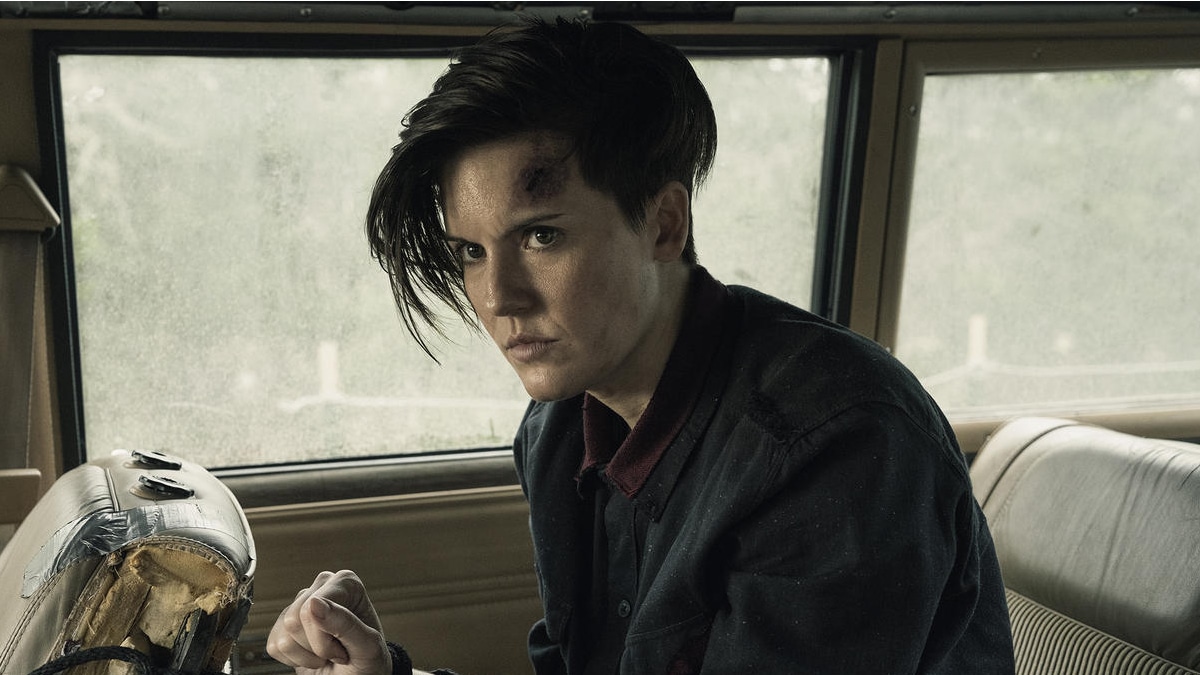 What is strange is that it’s surrounded by razor wire, which isn’t normal. Since Al has one barefoot, she uses it to open a door and makes enough noise to draw a zombie to her, who is also pulling the wire.

She gets the wire off the dead head, cuts herself loose, and kills the zombie before getting out of the car and begins wondering what the hell these people are hiding around here. 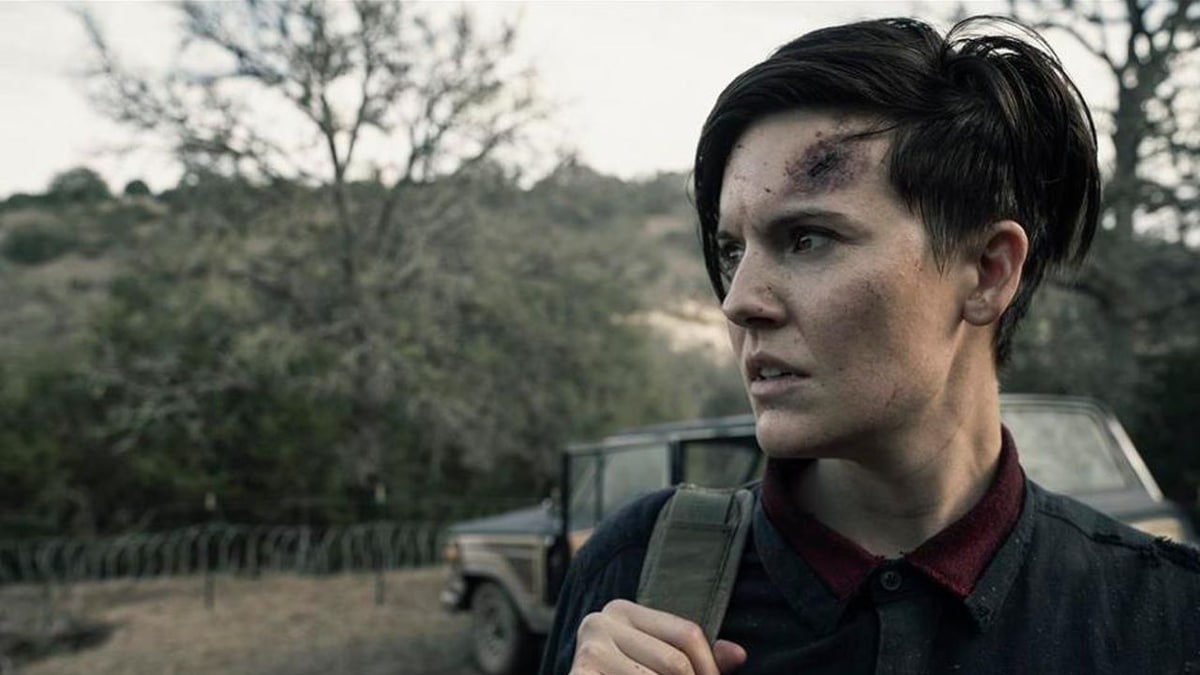 She soon finds out and it’s the Mystery Helicopter we saw in the last episode. She hops in and tries starting it, but said copter is bingo fuel.

Also, Mystery Woman is standing in the cockpit door pointing a pistol at Al, which is usually a good incentive to not try starting the copter.

Since Al was able to make off with her camera the night before, MW wants to know where she stashed the tape of what she found before getting zapped.

Al wants to know what’s going on. MW wants the tape. Al will tell her the location if she gets an interview. Al is held at gunpoint as MW radios in.

She’s got it all under control, but she needs to refuel. The voice on the other side says a “reclamation team” will arrive on-site in 72 hours. Copy that, out. 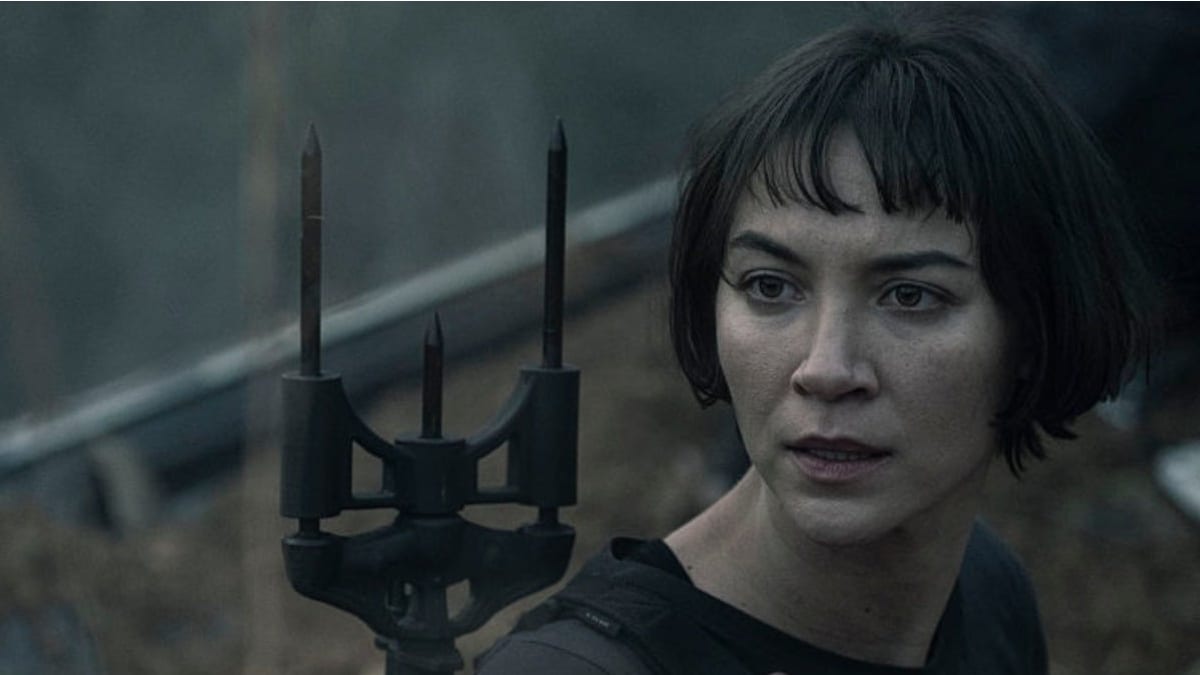 On the road and Al’s doing all the talking. She decides to call MW “Happy,” cause why the hell not? Happy wants the tape. Al wants to know why she killed her partner, something she’s figured out.

Turns out they were rummaging around the nuclear plant we all know and love and the dude — a person she calls “my friend” — decided to violate “operational security,” which means he got out of line.

Al wants to know Happy’s story: Happy keeps telling her to drop it, to give her the tape, to not follow this story.

They reach a location where a lot of cars ended up and Happy says something about a climb. Seems there’s a copter pad with supplies and fuel at the top of this cliff and they’re going to climb the wall to get there.

There’s a bunch of zombies in the area so Happy tells Al to stay with the car. Al pretty much says “You’re not the boss of me” and gets out.

Happy gives Al her jacket and goes over and dispatches the zombies with her military rifle which is sporting a Lobo — because someone obviously looked into an alternate dimension and read World War Z. 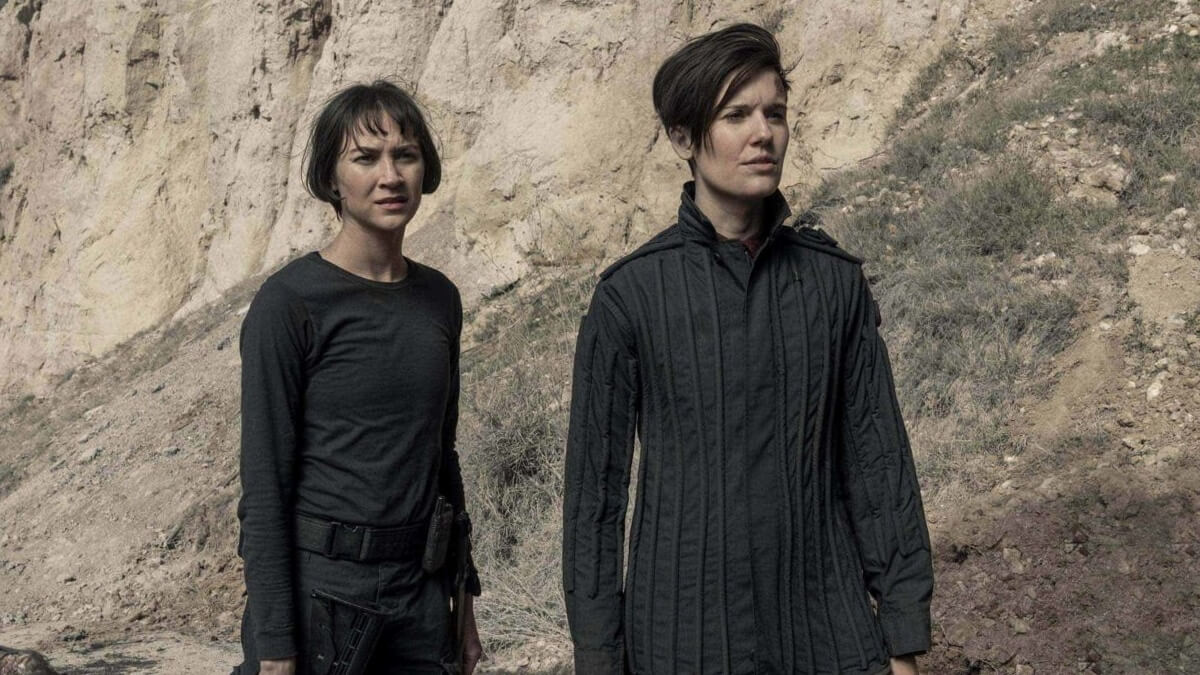 They recover the gear from the car — and in the process, a zombie attacks Al, and we see Happy’s gear is bite-proof. Happy finds what she thinks is the tape she’s looking for in Al’s camera bag.

But it’s not: Tape #7, The Bog, is obviously something shot at the start of the Zombie Apocalypse. Near the end of the tape, she apologizes to Jesse, whom we discover was her brother.

They climb. Al has some experience here and they do okay, but they gotta get past a zombie climber. In the process, Happy falls and dangles and tells Al to cut her loose. Al is like screw that, kills the zombie, and secures their line.

As she’s been saying all along, I fall, you fall.

They finally make it to the top and find a zombie tied up. Happy goes to Lobo the fool and as soon as it’s down, she’s sucker punched by Al, who lets her know, once more, that she doesn’t follow orders and she’s gonna hold on to the rifle for her own “operational security.”

Eventually, she gathers together a whole bunch of gas and gear from the pad and decides to leave Happy there. You could say, Al has been working on stuff… and things. 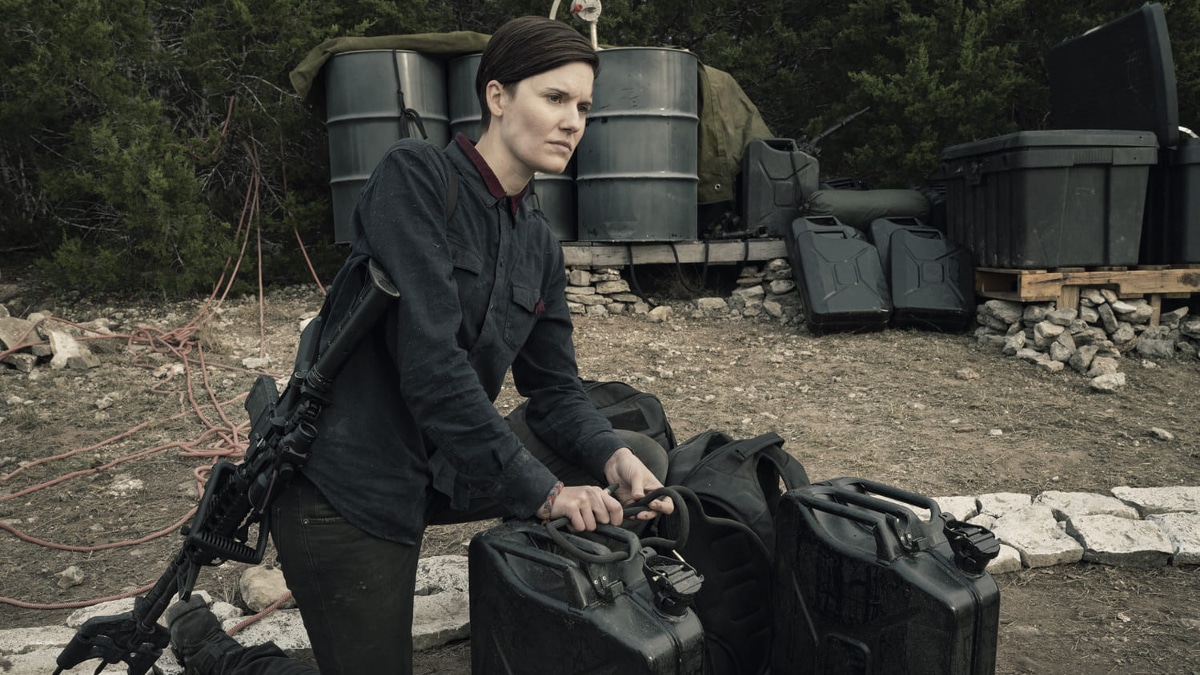 Happy begs her not to go. She says a “reclamation team” is coming in about 24 hours and if they see her, she’s dead. She starts to open up and Al stays — because she’s all about the story.

It’s why they can’t be discovered because they are trying to make something out of the chaos that’s going to make things a whole lot better. While she doesn’t say “The Commonwealth,” nearly everyone who’s read the comic is thinking this.

Happy says she had to kill her friend because he went rogue, he violated protocol and that violates operational security. She shows Al a key that she took off him: it was to a cabin he used, one with a view so great you could see to “The End of Everything,” which would make a hell of a good episode title.

She throws it off the cliff and there’s a bit of silence — and Al says she knows Happy is going to kill her. Happy says she has to because no one can know about her, about the place from where she comes.

It’s operational security, you understand?  But they seem to come to a truce because Al agrees to hand over the tape.

They spend the night at the pad ’cause it’s secure. They talk. They drink beer around a fire. They look at the stars. They both agree this is pretty nice…

Happy wakes Al the next day and tells her they gotta get on the move, the reclamation team is coming and they need to hoof it back to the copter — and pick up the tape along the way. 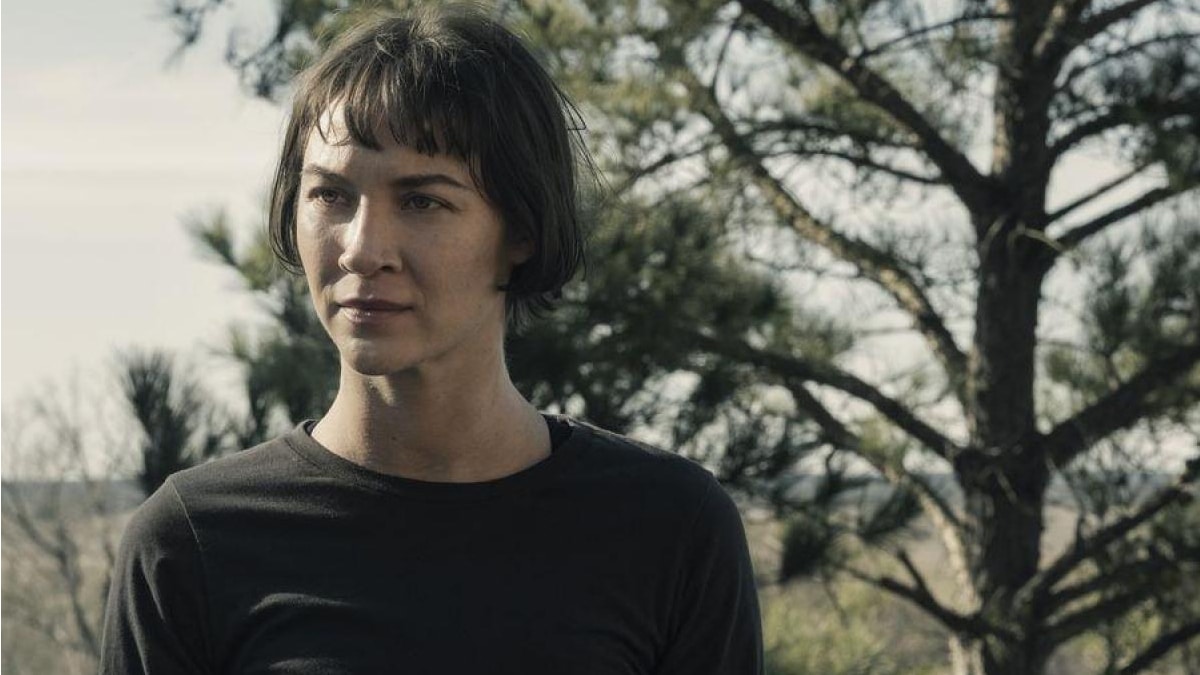 They return to the stream where Al killed the two zombies.  Turns out she hid the tape on one of the bodies. She hands it over and Happy destroys the cartage.

There are lingering glances and Happy says the tape was only a part of the story, no one can know about the mission — no one. She tells Al to turn around and even says please because she can’t look her in the face.

Happy pulls out a pistol. Al knows what happens next: operational security. She’s ready for the bullet in the back of the head…

And Happy wants to know why. Why did you give me the tape if you knew you’d die? Because Al knows for however much longer she has to live, she’ll know she chose something other than the story.

She turns around and gives Happy the tape with her farewell on it and tells her to make sure that story matters, see to it he lives.

And… Happy can’t pull the trigger.

She wants Al to live. She tells her not to chase this story, don’t come looking for her.

And as Al turns around we find out the rest; the woman’s name is Isabelle, she’s from Indiana, and she got to see the prettiest thing since the end of everything.

There are a few more lingering looks and they kiss. 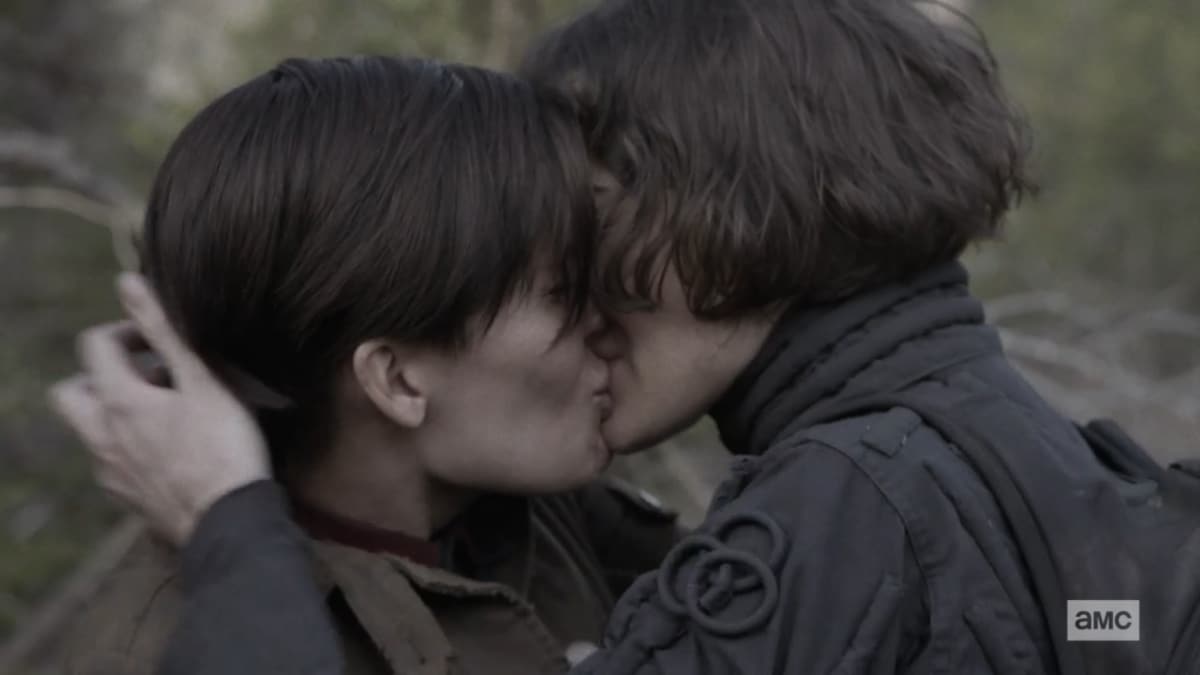 Al and Isabelle go their own way. Isabelle returns to the copter and says there’s no need for the reclamation team, she’s coming in.

The voice on the other end wants to know if she’s got the payload and she confirms. She looks at the tape given to her, stuffs it in her suit, and takes off.

Al sees the copter leave and keeps walking. She gets Morgan (Lennie James) on the radio and eventually meets up with him, Alicia (Alycia Debnam-Carey), and the kids.

She gives them a BS story about a herd coming after her and how she had to lose them. Alicia asks about the copter and while Al says she heard it, she didn’t see. They begin heading back to the truck stop and Al stops and says:

Alicia and Morgan ask what that is and she says she had two Polish parents and that’s her last name.  That’s who she is: Althea Szewczyk-Przygocki.

She thought they should know.

Personal Note: First off, the episode lists the director as Michael E. Satrazemis, but much has been made of this episode being directed by Sarah Wayne Callies, aka Lori Grimes from The Walking Dead, making her the third person associated with the franchise to direct an episode.

Haven’t been able to discover as of yet the reason for this discrepancy, but I’m certain there’s a reason.

Now, about that kiss… Holy geez, from the start of the episode my lady gaydar was pinging so hard I thought I was on a ship looking for a sub.

By the time of the campfire, I was Ivory Soap certain something was going to happen after that beer and all the looks during the tape handover and Isabelle’s inability to shoot had me going, “Come on, kiss already!”

Pretty certain that I know what Izzy meant by seeing something pretty at the end of everything.

Does this mean Al and Izzy will meet again? Could we see Isabelle in the Rick Grimes movies — which means, could we see Al there as well?

There’s been no word as to whether or not Fear is being renewed for a sixth season, but since the Walking Dead movies are likely taking place on the WD dead timeline — which is to say, perhaps somewhere in the summer of 2020 — seeing a few Fear characters turn up might not be out of the question.

I’ll write about this in another article.