Okay, somebody tell the DJ to play “Are You Ready For This” because The Bachelorette is back, baby! Finally after the longest year ever and no new Bachelor content to show for it (we do not speak of that greatest clips show), Clare Crawley is about to turn the entire franchise upside down. Well, allegedly. To help get fans excited for the show’s return, Bachelor and Bachelor in Paradise alum Hannah Godwin is crashing watch parties tonight. Safely and digitally, of course. Leading up to her premiere shenanigans, Hannah chatted with Cosmopolitan to reveal what she really thinks about all the drama this season, how wedding planning is going, and her new partnership.

Before getting into the drama with Clare and Dale Moss this season, Hannah gave an update on her and Dylan Barbour’s wedding planning. Long story short, it’s on pause. Her Pinterest board and saved folder are as far as it goes, because who the hell knows what’s going to happen in the near future. In the meantime, she’s just enjoying this time being engaged and is pumped to watch how Clare’s journey unfolds.

She explained to Cosmo, “I’m just excited to have a show that I can tune into because we haven’t really had that for a while. I grew up watching The Bachelor with my mom, having Chinese food and wine nights with her.” And referencing how she and Dylan fell in love on Paradise, Hannah added, “And now we have a different perspective watching it because we were on it. We’re like ‘Oh, I bet this producer was talking to them then because they have a certain sense of humor and stuff.'”

ur my best view

When it comes to the reports that Clare and Dale got engaged before the show even wrapped, Hannah said she probably would’ve given the experience a little more time but is ultimately happy for her. “She signed up to follow her heart,” Hannah said. “And you know what, if it happens within the first two weeks then it happens within the first two weeks. If it doesn’t, it doesn’t.” Hannah went on to explain, “I feel like I’d want to give it more of a shot, but I think I’d be really proud of Clare if she was just following her heart and didn’t do exactly what the show expects her to do. I think that would be really cool.”

While we all wait to see how this season pans out, Hannah will be watching the show with a Hannah Haven cocktail in hand, as part of her partnership with Rum Haven. 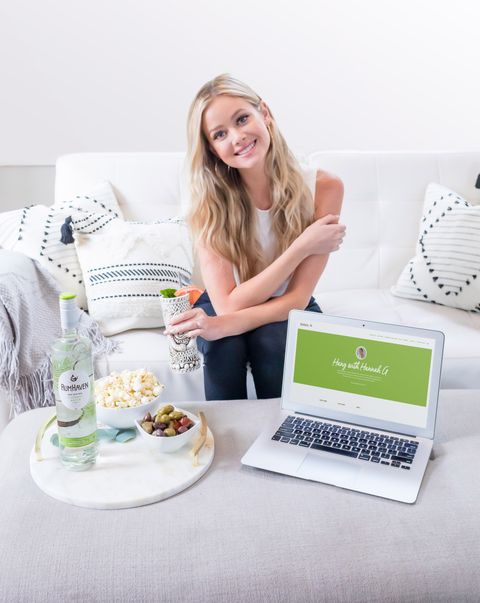 If you’re 21+ and wanna drink along, Hannah advised, “Basically all you do is mix equal parts of Rum Haven, watermelon juice, and grapefruit sparkling water.” She added, “It’s so good, it’s super refreshing. It kind of reminds me of Paradise a little bit…maybe I’ll pass the recipe over to Wells [Adams] if Paradise happens again.

Fingers crossed it does because IDK if Bachelor Nation can handle another year without messy love triangles on the beach.