In 2019, Fight Club celebrated its 20th anniversary, and not with any literal fight clubs…or at least any anyone knows about.

Some of the cast members have been interviewed of late about the film’s impact over the years. Edward Norton is one who recently talked about it for the first time in a long while.

During an interview with PeopleTV’s Couch Surfing show, Norton expounded on how much he and the other cast members were hurt over one unexpected thing. No, it wasn’t from being physically hurt during the fight scenes.

Considering the film was already a major experiment and sending a major message about toxic masculinity (years before such things were explored), it was lucky to make as much money as it did at the time.

Even so, Norton hoped the message would resonate much earlier than it did. 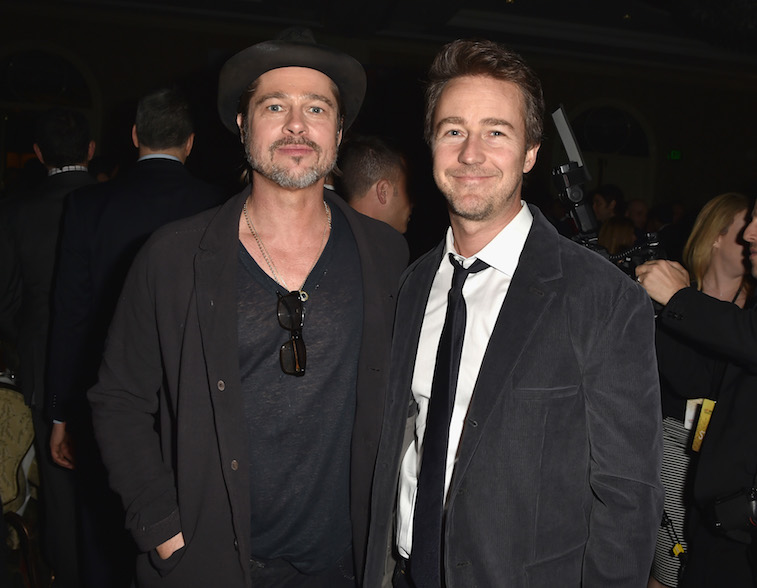 After 20 years, many might find it surprising the film didn’t really do well at the box office. Nowadays, it’s considered an iconic movie that helped define the latter part of pop culture in the 1990s. Many also own it in some kind of physical media form, and it’s constantly referenced on social media on a near daily basis.

In 1999, though, a movie attacking male masculinity and consumerism was a bit unheard of in making any decent money. Despite Brad Pitt being a full-fledged movie star at the time, some might have been turned off with the type of role he played here.

His Tyler Durden might have been a fantastical Mr. Hyde character in the mind of Norton’s anonymous “everyman” character, but he either enlightened or disturbed millions of men at the time.

Women likely didn’t love Pitt’s character either since Fight Club was usually deemed the ultimate anti-date movie. Since the majority of his fans in the ’90s were women, it’s no wonder he went back to more romantic parts afterward.

Outside of initial excitement over the film in its first week, it fell 42% in its second week, never making a profit at the box office. Norton says in his PeopleTV interview that he and the cast were initially hurt by the box office disappointment then.

Were men truly spooked by the ‘Fight Club’ message?

It’s still arguable the anti-toxic masculinity message of the film was a bit too obscured to really resonate until years later. At the time, some critics were concerned about copycats in starting similar “fight clubs” and in making brutal violence seem more acceptable by their peers. Sure enough, real fight clubs started popping up, then ultimately shut down by law enforcement.

There seems to have been some epiphanies about what the film was really trying to say, however. When going back and seeing how much the box office tanked in its second week, it’s clear many men who were first attracted to the film saw too much of themselves there and felt haunted.

Or, perhaps the girlfriends/wives of those men hated the film, hence men staying away in droves as a result. Since then, director David Fincher put together a director’s cut of the film on DVD to help flesh out the message and make it more understandable to the masses.

Only then has it finally taken off, including more references than ever recently as toxic masculinity became outed as a long-ignored global problem.

Norton’s point of view on the movie also gives interesting insight into how his indie film frame of mind was fully on display by 1999, including wishing for a positive public perception of the film’s message.

Looking back on the film now, Edward Norton feels better that Fight Club eventually connected with people, which is really more important than box office figures or awards.

Really, the film may have been 15-20 years ahead of its time, something Norton had to learn over time since he was still relatively new to making movies in 1999. A year before, he’d starred in the controversial American History X and already knew the value of making films that pushed people’s buttons.

Today, he’s still realizing this, including sticking with the cinematic indie code after not having the best possible experience going mainstream at the MCU.