Hoda Kotb is a much-loved member of the Today Show and is incredibly close to her co-stars both on and off air.

So it was more than understandable that the mother-of-two was left feeling emotional on Tuesday during a particularly moving segment on the program.

Hoda, along with the rest of the Today stars, had gone along dressed in a santa hat to surprise Al Roker outside his home in New York City.

Al has recently returned from hospital after being there for a month on and off due to blood clots on his lungs.

His co-stars wanted to cheer him up – and they certainly did just that! Hoda was seen teary eyed as she surprised her good friend – who was overwhelmed by the display of kindness from his colleagues.

Hoda, along with co-stars including Savannah Guthrie and Jenna Bush Hager, sang several Christmas songs for Al, who through tears joked that they should be auditioning for America’s Got Talent.

He also told them all as he stood at his door: “I’m surprised you did that without a prompter. “I just want to thank you all. It’s been a long, hard slog and I’ve missed you all so very much. All these faces, it just means the world to me. And my family.”

Al, who has taken an absence from the show due to being hospitalized, earlier gave an update to viewers from home on the air. “It has been a tough slog, I’m not going to lie.

“It has been the hardest one yet and I’ve had my share of surgeries. I have a lot of things and people to be thankful for.” 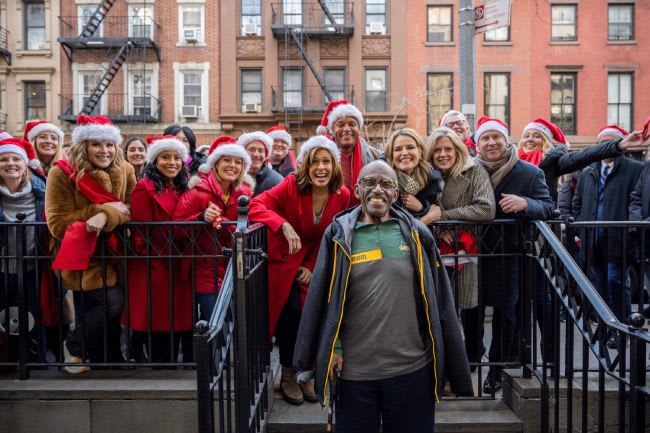 Al Roker was more than delighted to see his friends from Today!

He continued: “It gives you a profound sense of gratitude for this outpouring of prayers and thanks.”

The 68-year-old TV star, who has been a part of the Today Show for over 25 years, was admitted to the hospital shortly after Thanksgiving due to blood clots and remained hospitalized for over two weeks.

While he did return for a brief stint, he was hospitalized once again soon after the holiday for recurring issues, but thankfully, he’s back to his old cheerful self.