There was a snooker table on the Good Morning Britain set today as John spoke about the sport.

He set up a trick shot for the ITV hosts and Susanna Reid had her turn first where she made the shot the former professional had set up.

Toward the end of the interview after John had spoken candidly about recovering from a gambling addiction, Ben had his turn.

John explained: “All you’ve got to do is hit that tube, tube disappears the eight ball drops to the cushion, across the table and hit that pocket over there.”

Why did you have to do that

After some further instructions from John, Ben successfully completed the shot and potted the ball.

“I think maybe it’s not us, maybe it is John,” Ben laughed to Susanna.

“It’s so good to see you,” Susanna began as John leant in to pay her a compliment.

“Your’s was the best one,” John told a happy Susanna who burst out laughing.

“Steady! Why did you have to do that?” Ben asked as he jokingly batted away John’s handshake and exclaimed: “Get lost!”

However, it was all a bit of good humoured fun between the trio as they thanked John for coming on. 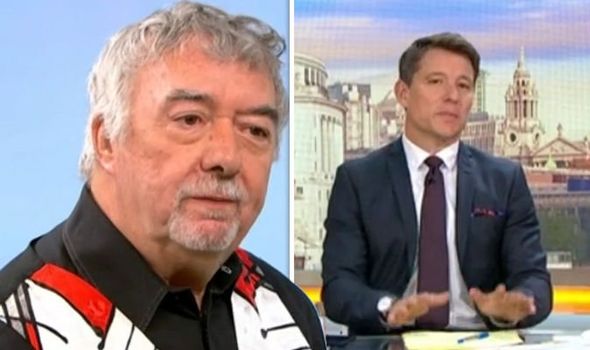 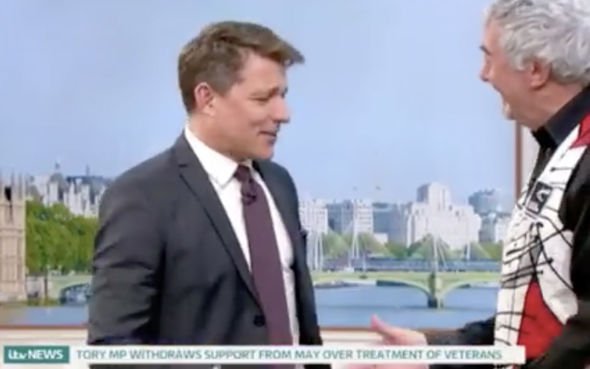 Yesterday on the programme, Piers Morgan was left screaming in agony after he was attached to a Tens machine that imitated birthing pains.

Piers was confident that it wouldn’t be that bad, although he was soon left eating his words.

“How hard can it be guys? I think I’m about to find out,” he stated.

It wasn’t long before Piers was left pulling agonised faces and had to stand up to deal with the pain.

As the machine was turned up to 40, Susanna asked: “Is it unbearable yet?” 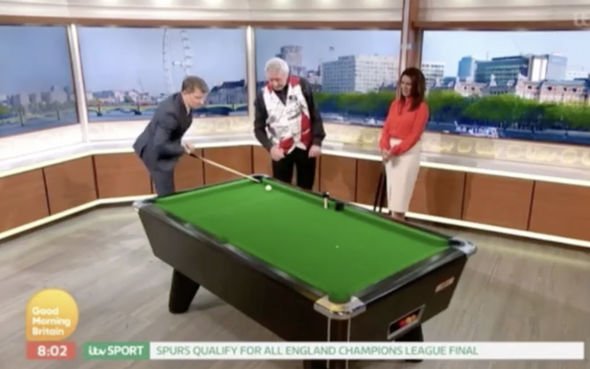 “Easy, easy,” Piers replied as Susanna continued: “This is just a contraction.”

Piers then joked: “I’ve got to dig deep and man up!”

“Are you going to surrender? Are you giving in?” Susanna taunted as Piers said: “Do. Not. Give. In.”

As the dial turned up to 60, Piers threw in the towel as he stood up and pulled the sticky pads off his stomach exclaiming: “That’s enough!”