Hi, hello there, I am dead now and my ghost is writing this article, because Jaime Lannister and Brienne of Tarth finally kissed in tonight’s Game of Thrones, and then they immediately slept together, and all of this happened barely twenty minutes in, and frankly I feel ambushed! But ambushed in a truly beautiful way! None of us, not even the most diehard of Jamienne shippers, were prepared for this. Even after six seasons of watching these two gradually develop a mutual respect and understated love for each other – and a relationship that’s among the most genuine in the show – it was unclear whether their bond would ever become more than platonic. But become it sure did, my friends, so so let’s take a breath and process what just happened.

The Battle of Winterfell is over, the dead have been burned, and everybody is extremely drunk and horny! Jaime, Brienne and Tyrion naturally end up playing a round of that game where you have to name a thing someone else has never done, and then that person has to drink if you’re correct (do we have a name for that? It’s like Two Truths and a Lie meets Never Have I Ever, only kind of mean?) Tyrion, going full douche, correctly surmises that Brienne has never had sex, and she peaces out of the party after he announces this to the table. After a tense moment with Tormund – who realizes pretty quickly that he’s on the losing side of this particular love triangle – Jaime follows her. 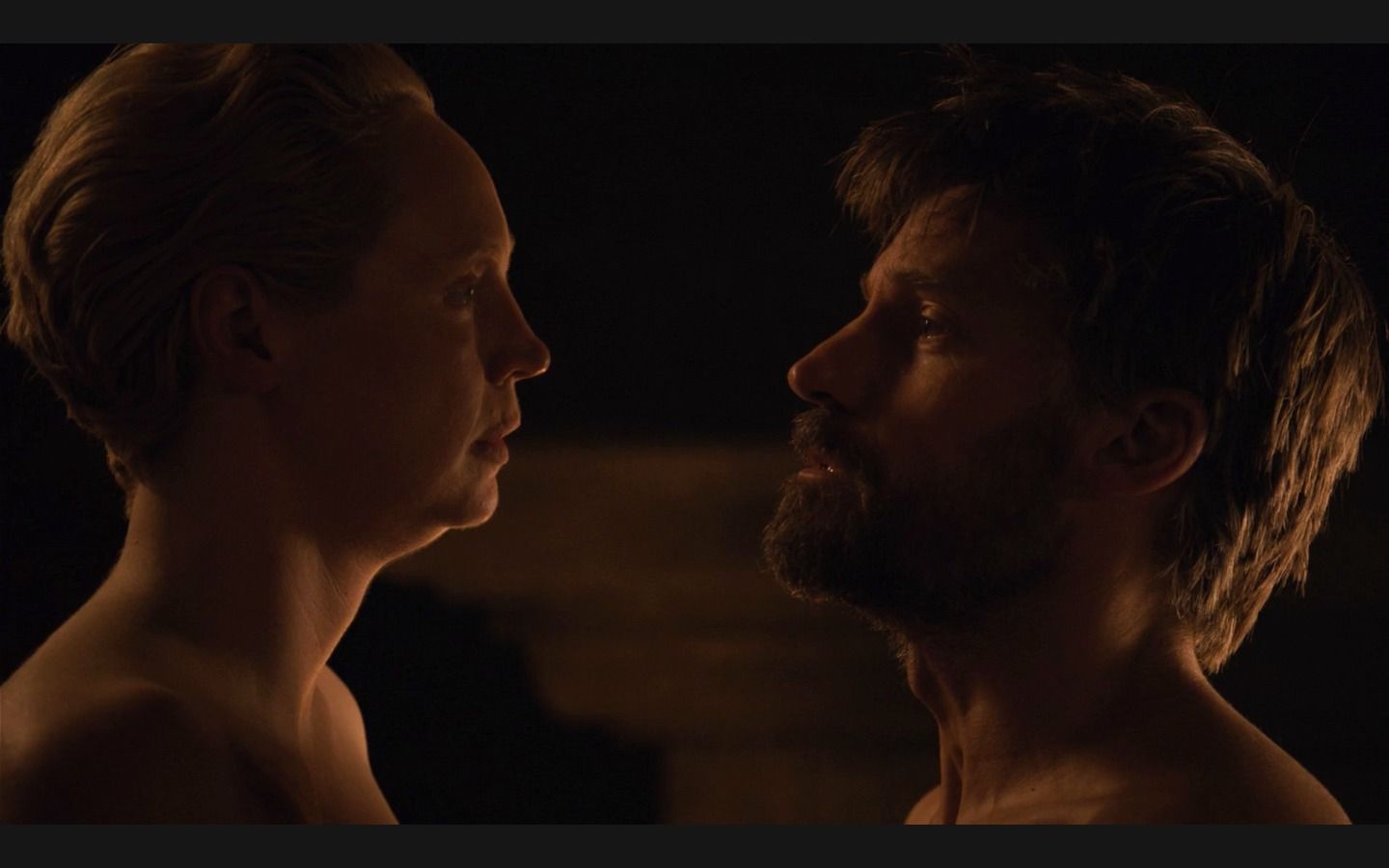 In Brienne’s chamber, Jaime shows up with wine and notes that Tormund was upset when Brienne left. “You sound quite jealous,” she says, mildly. “I do, don’t I?” YOU DO, SIR. Jaime realizes it’s getting hot in herrrrrre so he should take off all his clothes, but between the alcohol and the one hand, his buttons are proving to be a challenge. And because she can never resist helping Jaime out with the basic motor skills he lost along with his right hand, and also because she definitely is not opposed to taking his shirt off, Brienne starts unbuttoning it for him. “I’ve never slept with a knight before,” Jaime tells her, to which she replies, “I’ve never slept with anyone before.” And! Then! He! Kisses! Her!

Twitter, much like myself, was lost in a whirlwind of emotions after this moment. I know that a whole lot of other things happened in the fifteen to twenty minutes following Jaime and Brienne’s hookup, but it’s all kind of a haze?

Who could have imagined that just two weeks after Jaime knighted Brienne, with his sword, he would–– okay, I’m going to just leave that thought unfinished, because we all know that Ser Brienne deserves better than innuendos and I will not cheapen this beautiful perfect moment!

But alas…. the afterglow didn’t last. The episode concludes with Jaime leaving Winterfell to return to Cersei’s side, as Brienne desperately begs him to stay. “You’re not like your sister,” she insists. “You’re better than she is. You’re a good man.” She’s crying and it’s devastating, and it only gets worse as Jaime throws his many, many sins back in her face, skewering the redemptive arc he’s been on for several seasons. ““You think I’m a good man?” he asks, telling Brienne that he crippled a child, strangled his own cousin, and would have murdered “every man, woman and child in Riverrun” all for Cersei. “She’s hateful. And so am I.” And then he leaves Brienne sobbing in his wake and honestly HOW DARE THIS SHOW? 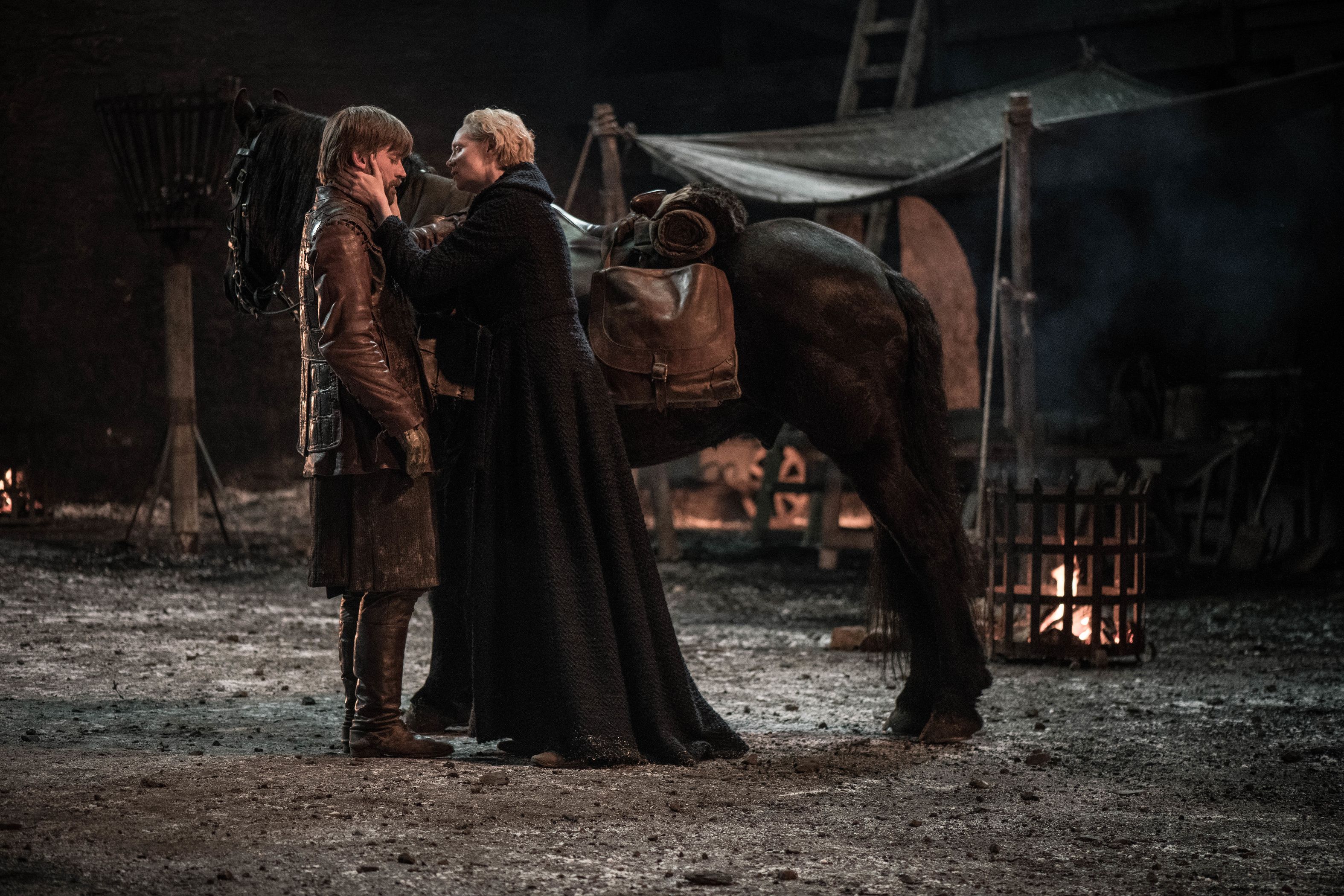 “As much as Jaime cares for Brienne and loves her, he’s got an addiction to Cersei that he just can’t break,” David Benioff said in tonight’s Inside the Episode featurette. “Even though he took a shot at happiness and a different kind of life for himself.” Ugh.

Who’d have guessed that it would be the episode after the Battle of Winterfell that truly destroyed us all?