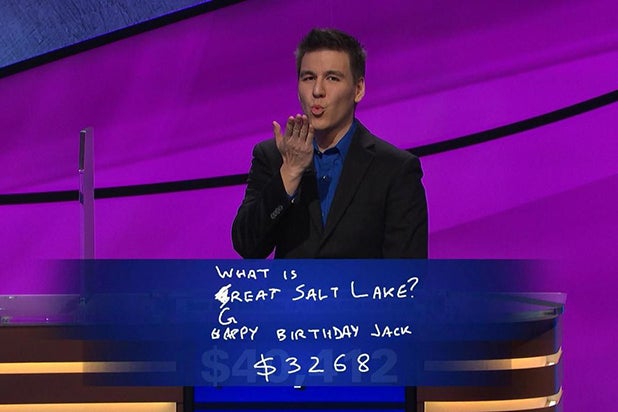 A lot of “Jeopardy!” fans seemed to think James Holzhauer intentionally threw in the towel, after he tweeted high praise for now-ex Indianapolis Colts quarterback Andrew Luck, who announced he is retiring over the weekend.

“I hope to be as brave as Andrew Luck one day,” Holzhauer wrote Saturday night after the Indianapolis Colts quarterback announced his retirement due to chronic injury problems.

He continued: “Imagine reaching the pinnacle of the only job you’ve ever trained for, finding no joy in it, and having the guts to do the right thing for yourself even though millions of fans will hate you for it.”

Imagine reaching the pinnacle of the only job you've ever trained for, finding no joy in it, and having the guts to do the right thing for yourself even though millions of fans will hate you for it.

For some reason, a lot of “Jeopardy!” fans took this to mean that Holzhauer was implying that he himself had already done this.

On Monday, when Holzhauer saw the commotion his Saturday tweet created, he got in the last word, suggesting that people who think he faked his loss are insulting, Emma Boettcher, the woman who defeated him.

Holzhauer’s 32-game, $2,462,216 winning streak on “Jeopardy!” made him a household name earlier this summer, but it ended just shy of Ken Jennings’ all-time winnings record of $2,520,700 when Boettcher stopped the trivia-machine in his tracks on June 3, just $58,484 away from the record.

Conspiracy theorists weighed in almost immediately with suspicion that he threw the game. Holzhauer explained his controversial last “Jeopardy!” bet to The Action Network, saying, “I knew I could only win if Emma missed Final Jeopardy, as there was no way she wouldn’t bet to cover my all-in bet.”

Following the show’s airing, Holzhauer said, “I never really believed I could win 75 shows, but I definitely thought I had a great shot at Ken’s cash winnings record.” He has one more chance to regain his former glory – both Holzhauer and Boettcher have signed on to the show’s 2019 “Tournament of Champions,” in which they will be two of the 15 contestants to compete for a grand prize of $250,000 over a 10-day period from Nov. 4-15.

Everyone says and does dumb things, but some of us unfortunately do it on national TV