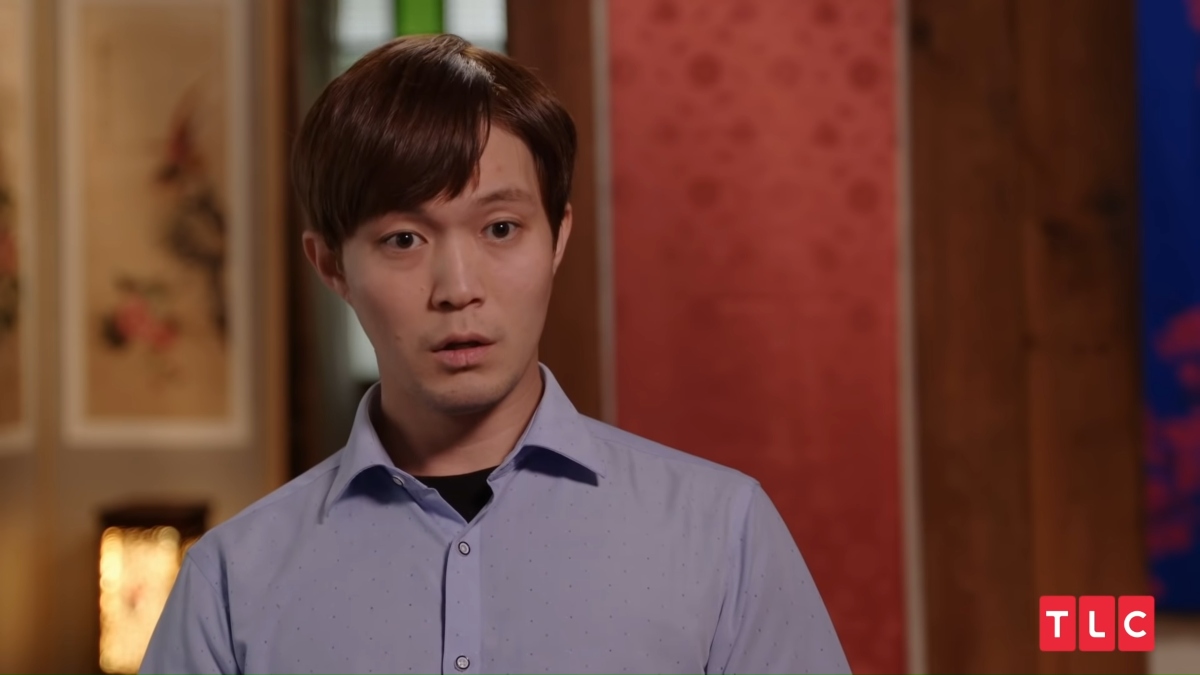 For weeks now, we’ve been hearing about Deavan Clegg and Jihoon Lee’s split. However, we’ve heard a lot of her claims while Jihoon remained silent.

Deavan has quickly moved on to another man, Korean-American Topher Park. The pair have been sharing steamy pictures and documenting their visits seemingly every time they meet up.

The 90 Day Fiance star even shared a photo of her new boyfriend dressed in the same shirt as her son Taeyang while holding him, drawing quite a bit of criticism from Jihoon’s fans.

To make matters even worse, Deavan claims that the reason for leaving South Korea is due to something “vile” that Jihoon did to Drascilla.

Since Deavan’s relationship has been revealed, she has also claimed that Jihoon has blocked her on all social media and that he didn’t want anything else to do with his son, Taeyang.

Now, we’re learning that Deavan’s version of events definitely doesn’t tell the whole story and Jihoon has finally decided to speak out about what he says really happened.

In a series of messages shared to his Instagram stories, Jihoon Lee began to refute many claims made by Deavan Clegg after it was learned that the pair had split.

Based on what he had to say, it doesn’t sound like he and Deavan are “friends” as he recently said.

Jihoon started out by talking about how he tried not to speak out on social media because he doesn’t like the drama. However, the latest round of accusations that have begun circulating were just too much and it was time for him to say what he needed to say.

He took aim at claims that his parents abused Drascilla, calling them “a lie.” Then, he went on to point out that there are videos of Drascilla and Taeyang out in public during the pandemic without masks and being forced on rides despite not wanting to do it on the YouTube channel that he once shared with Deavan. 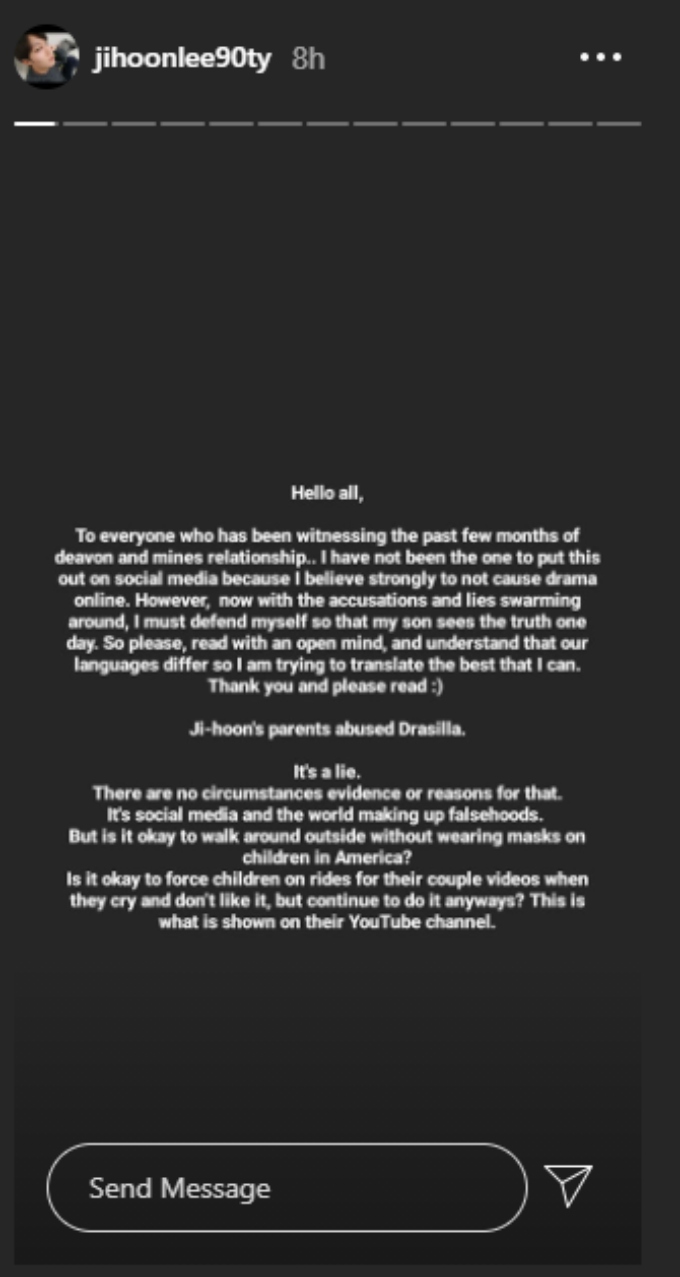 In the next message, Jihoon denied that he “took a nap” all of the time. He claimed instead that he worked from 10 am to 2 am. He claims that his “nap” time was really just him trying to catch up on sleep after a long week of working.

He also said that he was not working while earning revenue from YouTube based on what she told him but that he eventually went back to work so he could help his family make ends meet. This is likely why he was giving money to his mother on 90 Day Fiance: The Other Way and not that he was keeping it from Deavan like she claimed. 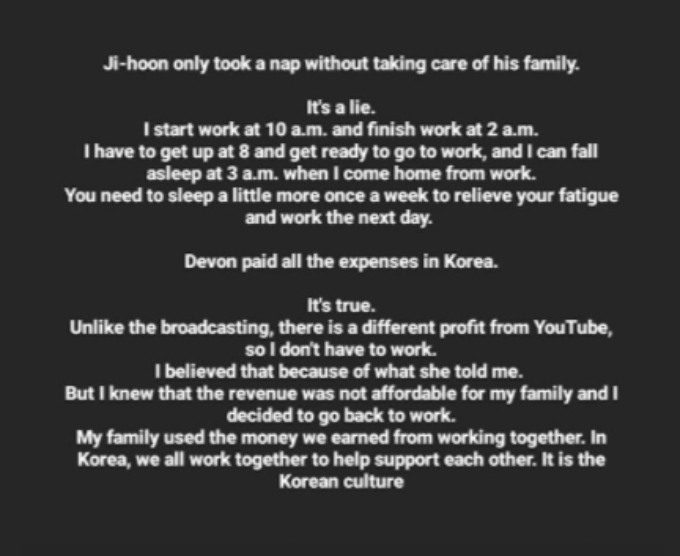 He also refuted claims that he wouldn’t get a job. Jihoon said in his next Instagram stories post that he was learning how to be a tile maker but had to quit because he couldn’t afford the cost of training. He says that he got a job that “paid me right away” and even though he got in a car accident while working, he continued to work so he could earn money. 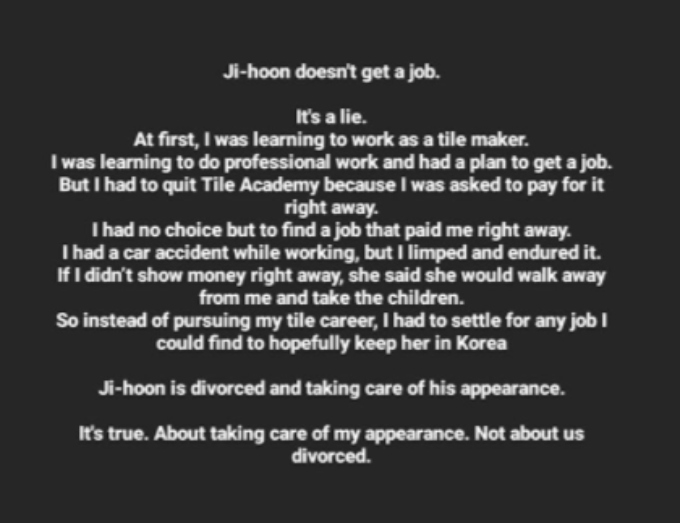 Jihoon also talked about “divorce,” confirming that the couple has not divorced yet but that he is taking care of his appearance.

He tried to make himself look better because he thought Deavan didn’t want him because he was a “nobody” and also said that finding out about her new boyfriend hurt him very much. 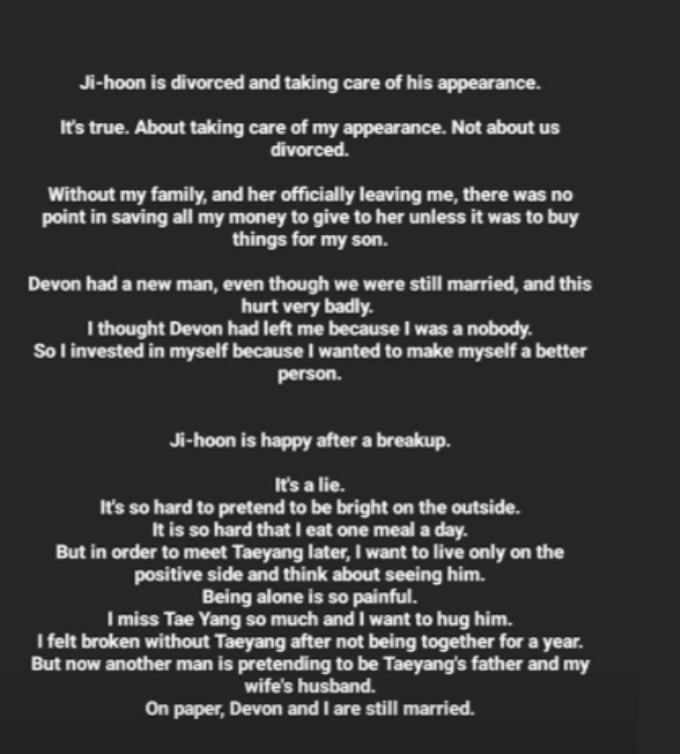 Despite the quickness that Deavan moved on with another man and even had him posing while dressed up to match Jihoon’s son, he claims that she asked him to be Drascilla’s dad. Jihoon claims that he tried to do just that but he couldn’t because Deavan wouldn’t let him act like a parent or correct Drascilla’s bad behavior. 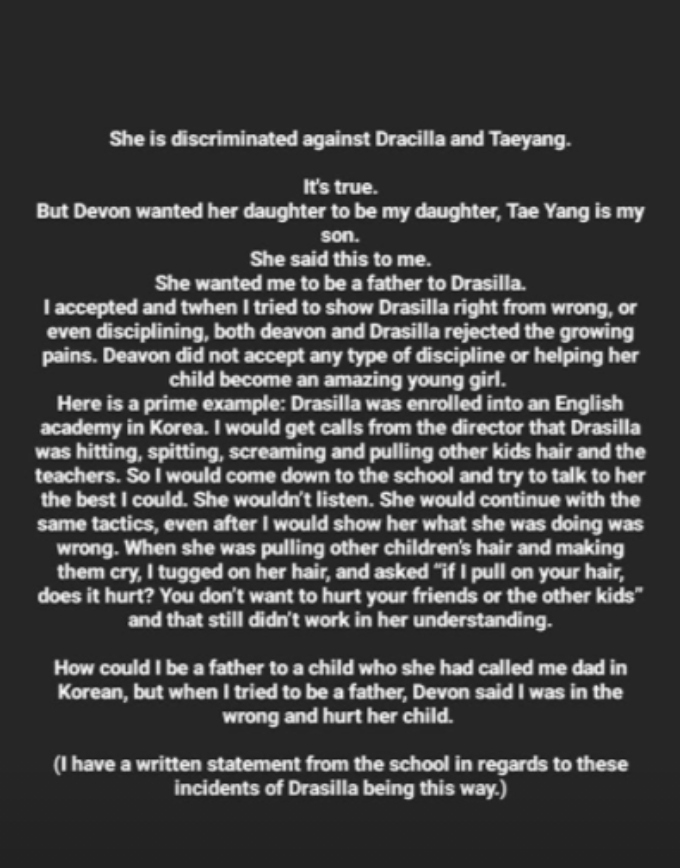 He also claims that Deavan is lying about claims that she tried to contact his parents and said that he can prove it.

And despite Jihoon trying his hardest to learn English, he claims that Deavan was not interested in learning Korean. This caused some serious communication issues for the former couple that may have led her to believe that he didn’t want to see his son. We’re all aware that the translator egg was not entirely accurate. 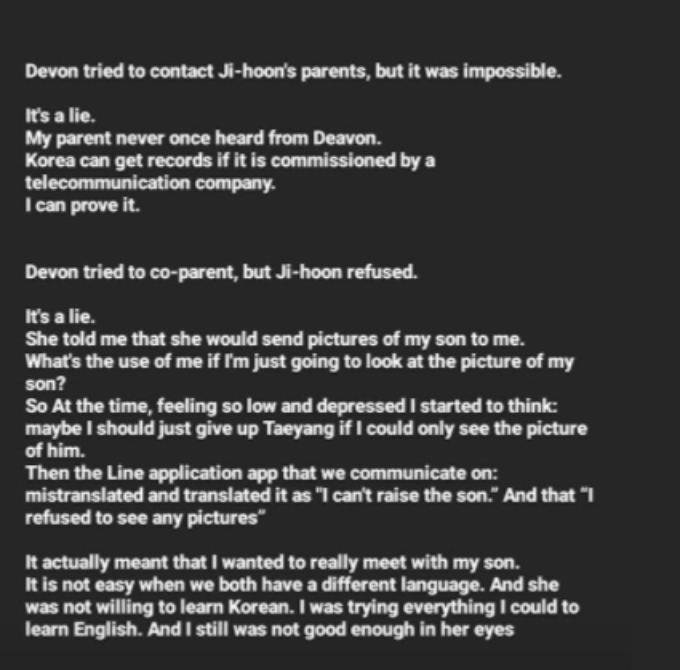 As for the couple’s split, Jihoon claims that Deavan threatened to kill herself if he didn’t let her take Taeyang back to America. It was this message on his Instagram stories that he addresses the painful abuse claims that continue to circulate.

He says that he came home immediately when Deavan threatened suicide and it cost him his job. Then, after he sent her back to America, even offering to keep the kids for her, she started talking about how he allegedly abused Drascilla, causing her to leave South Korea suddenly. 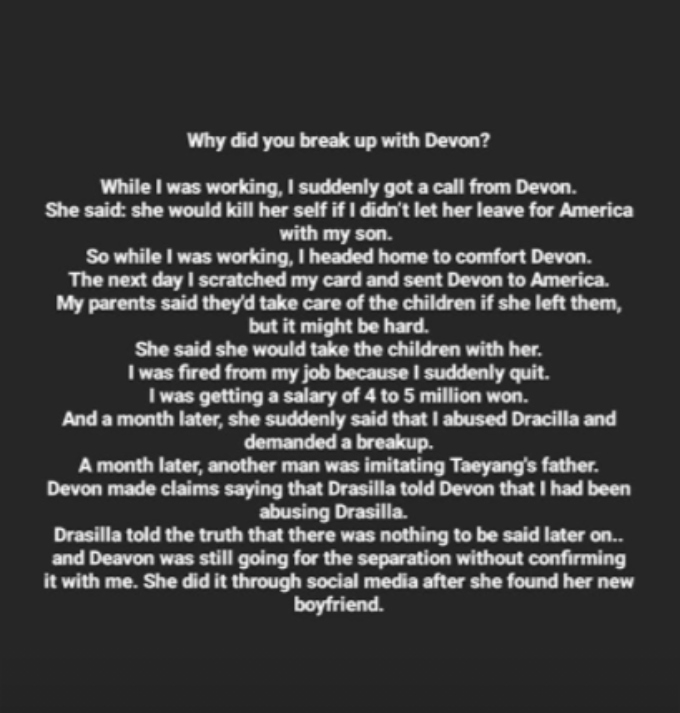 Even though there have been horrible stories and even worse speculation about what Jihoon Lee may have done to Drascilla, he says that he stayed quiet because he didn’t want to put all that drama on social media.

He also made it clear that the money he makes from Cameo goes to Deavan and is supposed to be paying for Taeyang’s care. It’s not to pay for her trips to California to see her new boyfriend.

Jihoon also said that Deavan tried to “use the law against” him but now he is more familiar with both Korean and American laws and he does have hope and options when it comes to seeing his son. 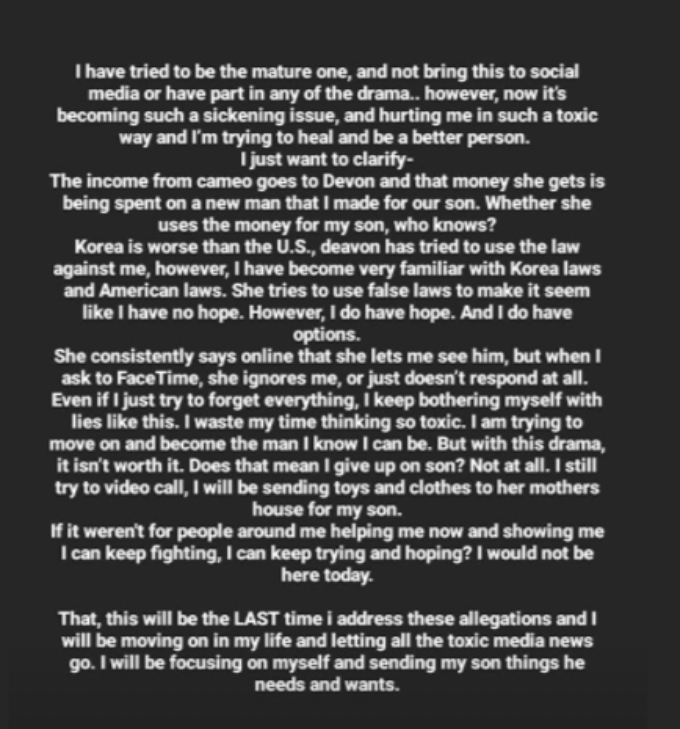 As Jihoon reflected back on his time and experiences with Deavan, he also revealed that she was speaking to other Korean men on her phone. 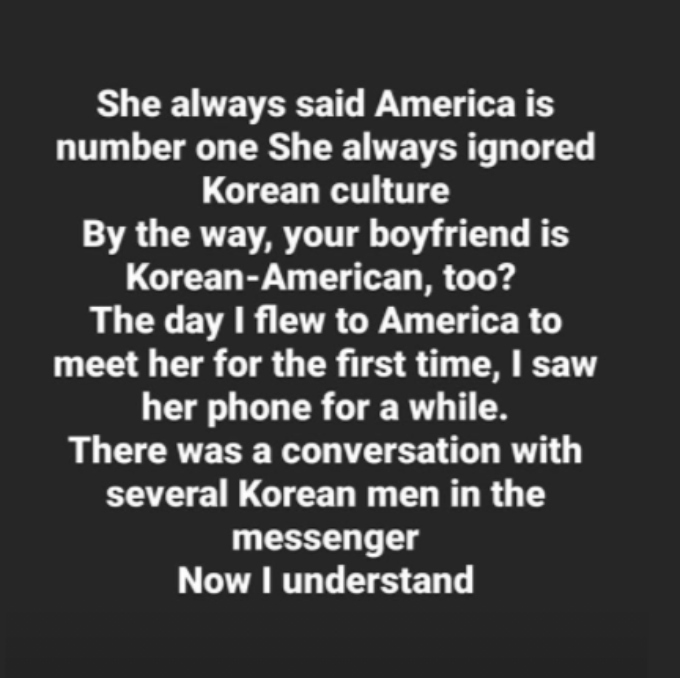 He also claimed that Deavan was really rude to his parents. 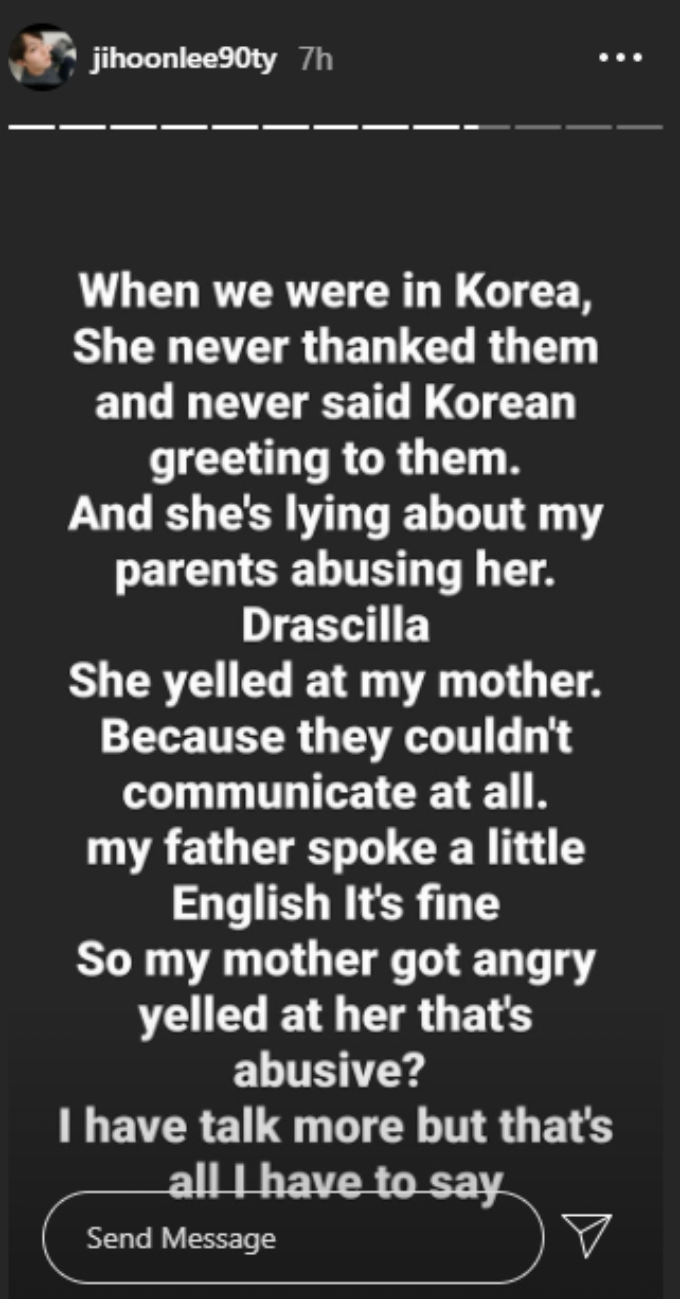 Even though all of this has been really painful for Jihoon, he did give Deavan credit for helping him to grow up. 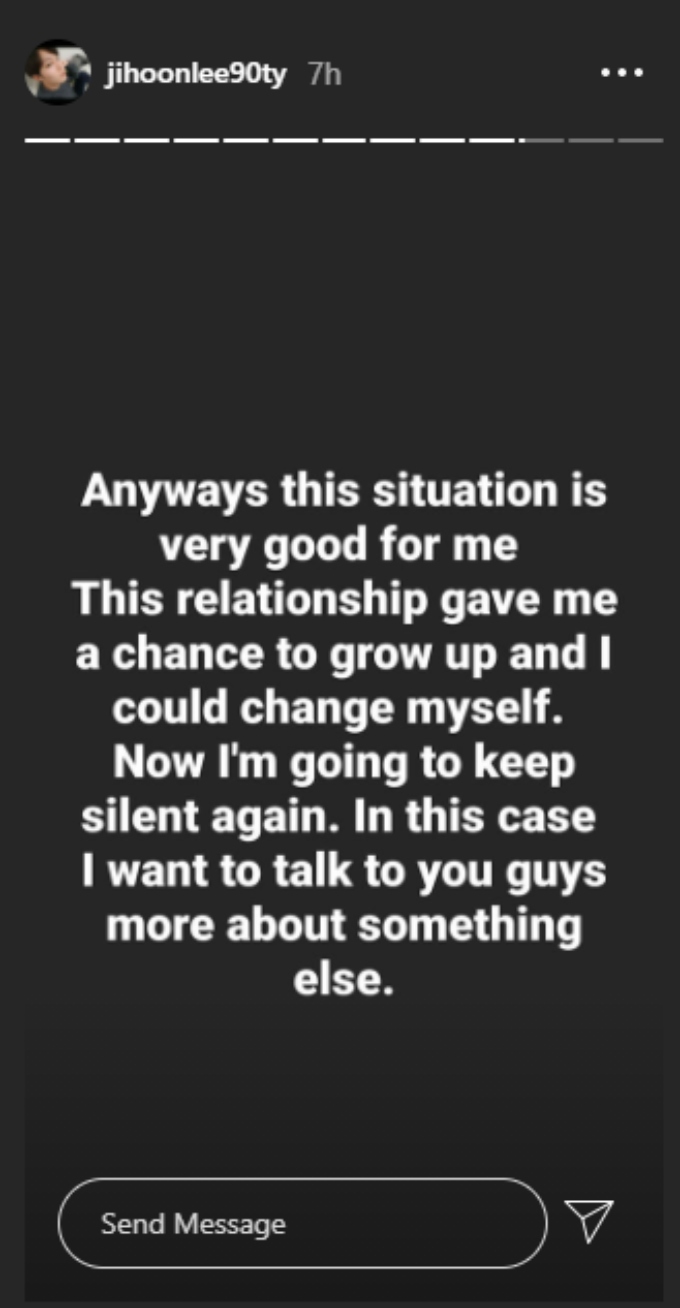 He made sure to mention how quickly Deavan moves from man to man. He also questioned why she was working so hard to make him the bad guy. He clearly cares deeply for his son despite Deavan’s claims that he wants nothing to do with Taeyang. 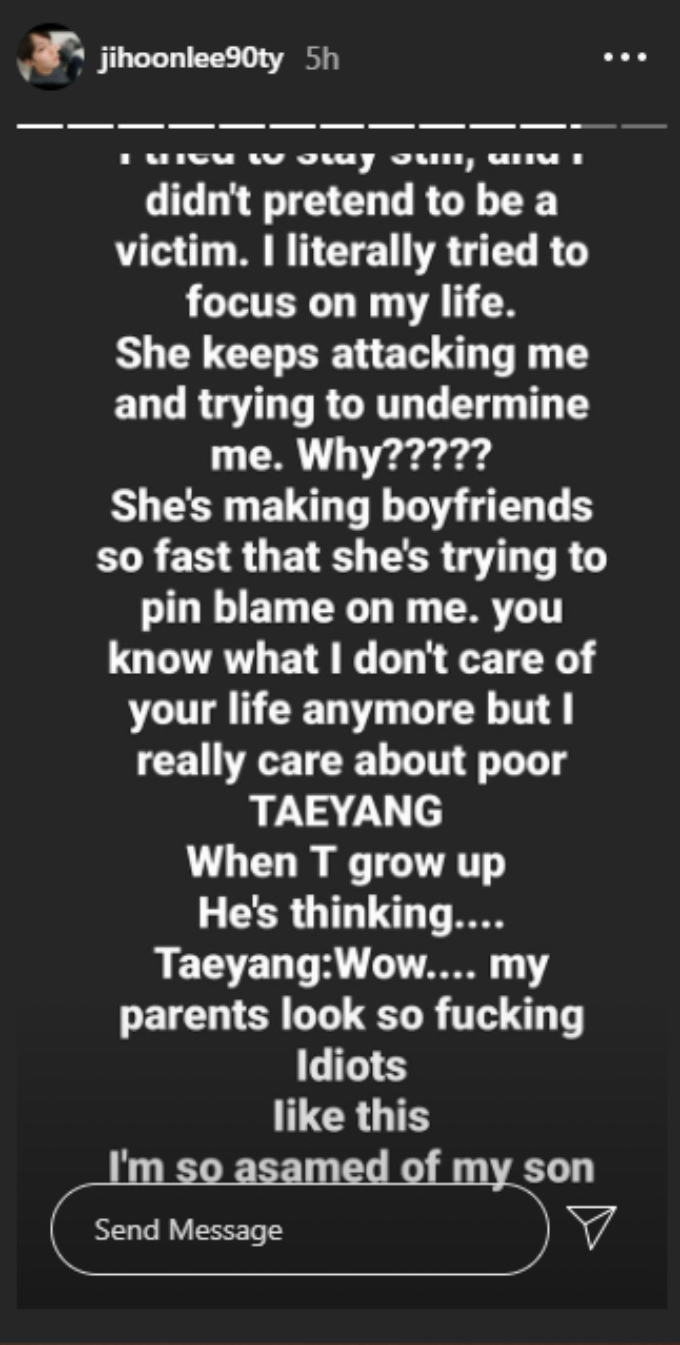 And he’s also worried about how Taeyang will feel when he’s older, looking back on actual footage of his parents’ relationship and how it all went down. 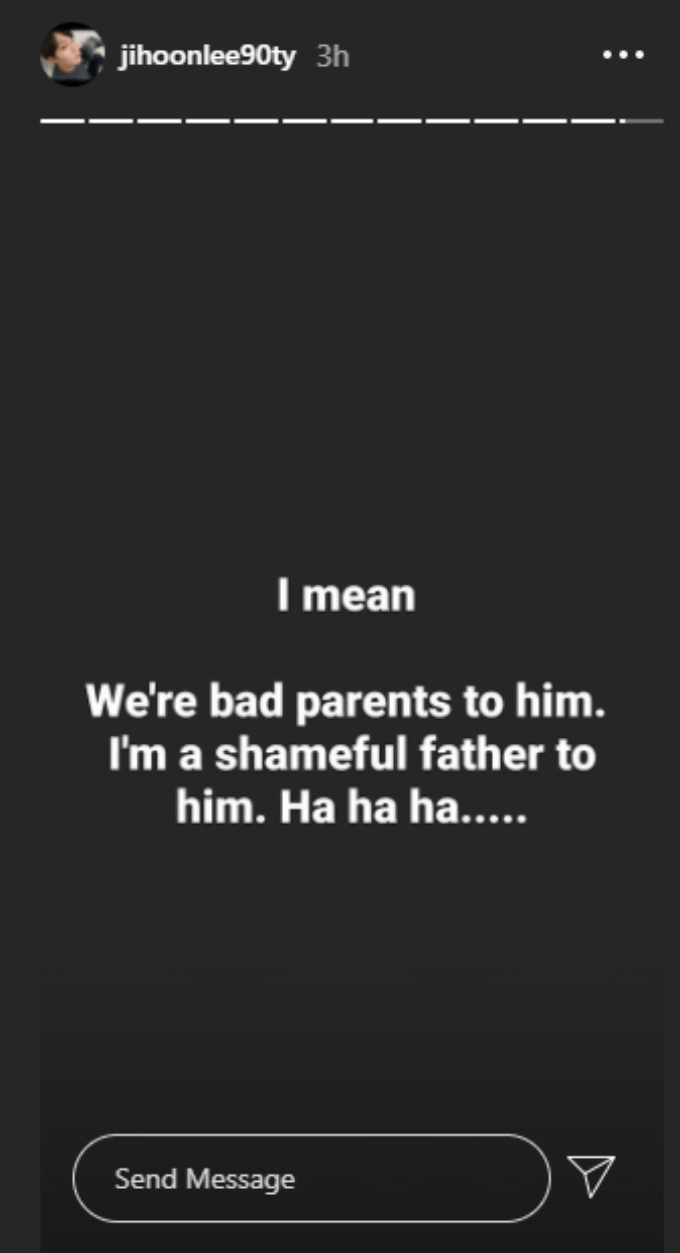 With all of the back and forth, rumors and accusations amid Jihoon and Deavan’s split, it’s no wonder that they will not be appearing on the 90 Day Fiance: The Other Way Tell All.

Previously, Deavan promised that details about their split and why she fled South Korea would be shared there. Now, it looks like much of the information we will get from here on out will come directly from Deavan and Jihoon and he has said this is the last time he will speak on it.