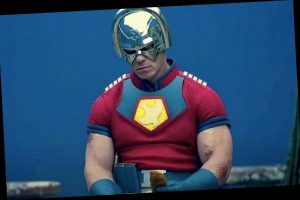 The wrestler-turned-actor shows his ‘face of defeat’ as he talks about the ‘most difficult stunt’ he filmed for James Gunn’s upcoming DC star-studded anti-hero movie.

AceShowbiz -Wrestling icon-turned-actor John Cena was made to force down 40 empanadas in one take for filmmaker James Gunn‘s upcoming “The Suicide Squad“.

The “Blockers” star portrays Peacemaker in the DC Comics blockbuster, and he showed off his superhero costume on Monday (01Feb21) as he appeared on “The Tonight Show Starring Jimmy Fallon“.

During the interview, Cena shared a photo of himself onset as he struggled to wolf down his 37th pastry for one scene, and admitted eating empanada after empanada was his biggest challenge in the film.

“That, right there, is the face of defeat,” he said of the image.

“It was one big take, because the horribly beautiful, corrupted mind of James Gunn operates in so many intricate pieces and he wanted this big, giant take where I thought it’d be cool to be like, ‘Oh, it’d be funny to eat the whole empanada. Throw the thing over my shoulder, the guy catches it. It’s gonna be great. Everybody’s gonna think it’s awesome.'”

It was only when he realised he had to repeat the stunt multiple times that Cena realised it wasn’t the best idea. “I had to do it 40 times, and nearly made myself sick,” he confessed. “That was my most difficult stunt in The Suicide Squad.”

Gunn’s “The Suicide Squad”, due for release in August (21), is set to serve as a standalone sequel to 2016’s “Suicide Squad“, and will feature Cena alongside Margot Robbie, Joel Kinnaman, Sylvester Stallone, Viola Davis, Jai Courtney, Idris Elba, and Peter Capaldi.

Cena will also be filming a Peacemaker TV spin-off, written and directed by Gunn.