John Krasinski Gives Shout-Out to His Daughters During 'SNL' Debut 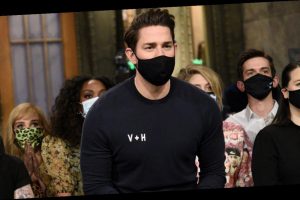 John Krasinski hosted Saturday Night Live for the first time ever over the weekend, and the beloved actor hit it out of the park — both as a host and an adorable dad.

After a night of fun sketches, in which Krasinski came off more like an seasoned pro than an SNL first-timer, the Jack Ryan star still remembered to give a sweet shout-out to his two daughters — Hazel, 6, and Violent, 4 — whom he shares with wife Emily Blunt.

During the closing moments of the show, during the traditional cast goodbyes, Krasinski gave the usual thanks to the cast and musical guest — but his shirt conveyed a special message honoring his little girls.

Krasinski, 41, donned a black, long-sleeved shirt with the letters “H+V” stitched into the fabric over his heart.

Thank you, @johnkrasinski and @machinegunkelly!

Many fans may have been momentarily distracted by Machine Gun Kelly and Pete Davidson hugging so hard they both fell off the stage, but Krasinski’s stylist, Ilaria Urbinati, drew attention to the tribute when she took to Instagram to share some insight into the look.

“John wanted to have his daughters’ initials monogrammed on his shirt for SNL goodnight looks,” Urbinati wrote, adding the tag #Girldad in her caption.

Krasinski also mentioned his daughters during his monologue — in which he ended up locking lips with Davidson — while explaining how big a deal it was for him to be hosting SNL.

“I am so honored to be hosting the first show of 2021! I genuinely cannot tell you what a huge deal it is for me to be here right now!” Krasinski shared. “I have been watching this show since I was 8 years old.”

Krasinski certainly made the most of his SNL debut. The Office star played Tom Brady in the show’s cold open and swung for the fences in all his sketches, marking a seriously solid start for the second half of Season 46.

Check out the video below for more on Krasinski’s first-ever time hosting the acclaimed sketch series.