KATE Garraway wished husband Derek Draper "good morning" on today's GMB as she told viewers he would be watching her in hospital.

Seriously ill Derek has been tuning in to Kate on the show in recent weeks after his condition slightly improved – although it's unknown how much of it he is taking in. 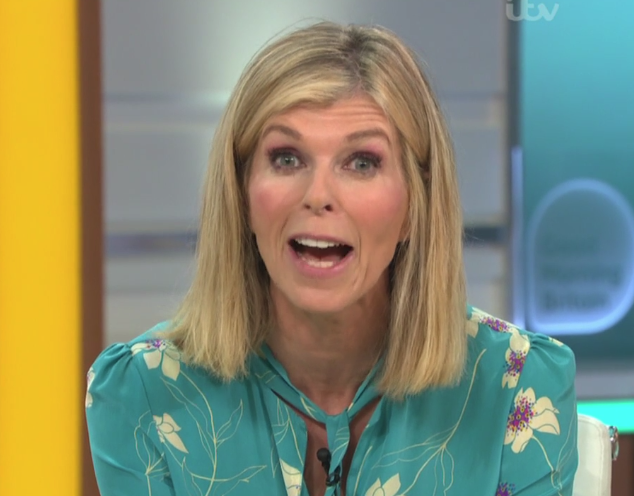 The dad-of-two remains in intensive care as he continues to battle the after effects of coronavirus.

Kate said she was going to visit her husband once GMB had finished and added: "Good morning to Derek. We don't know how much he can see or hear, but he knows the programme is on."

She also thanked the team looking after Derek, telling them: "The team are watching. Thank you for everything you’re doing." 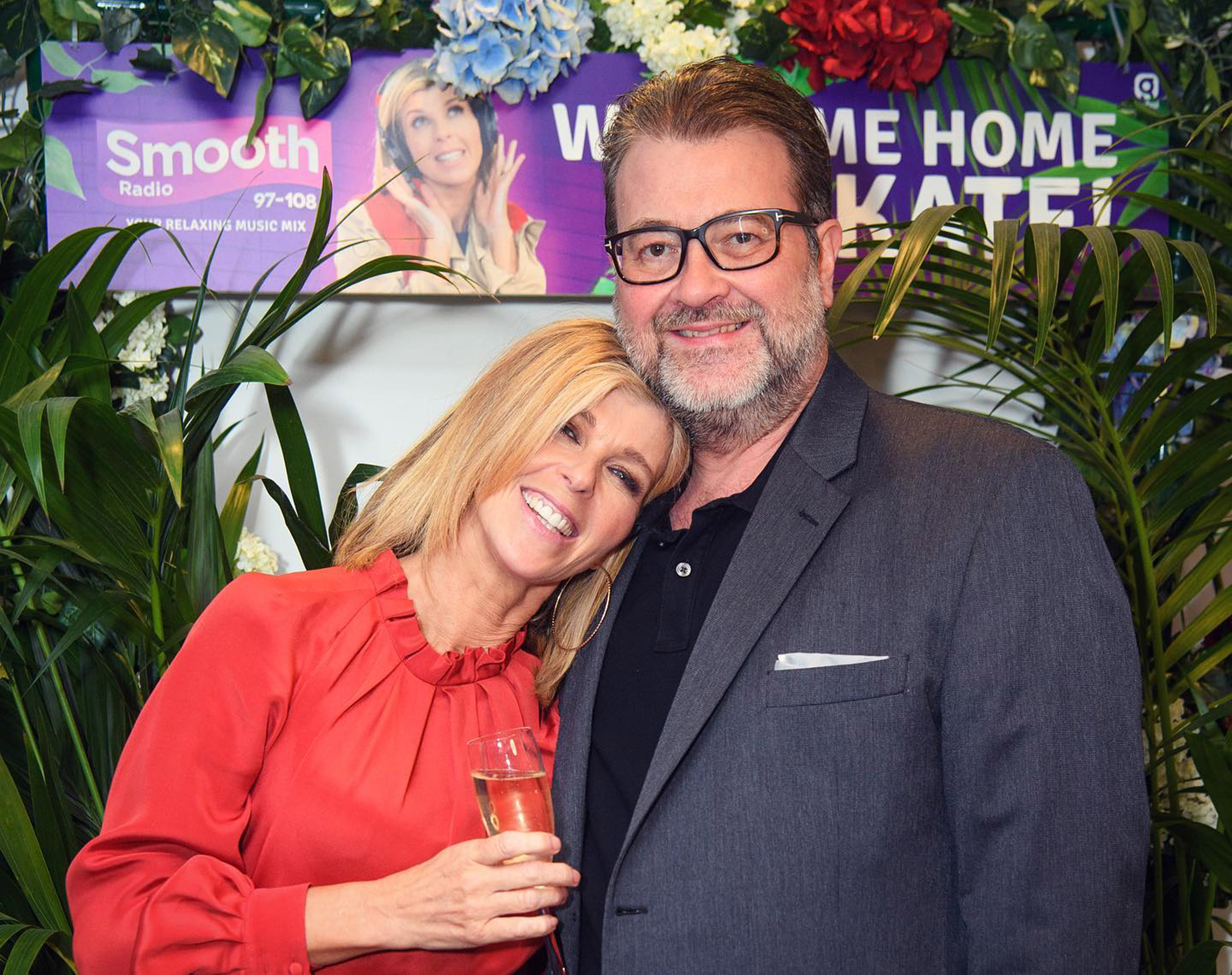 It prompted 2,000 people to register to give plasma which impressed Kate, and she vowed to tell Derek.

Kate had offered to donate her own plasma to Derek back in April but was told it was too risky at the time as she gave an update on his condition. 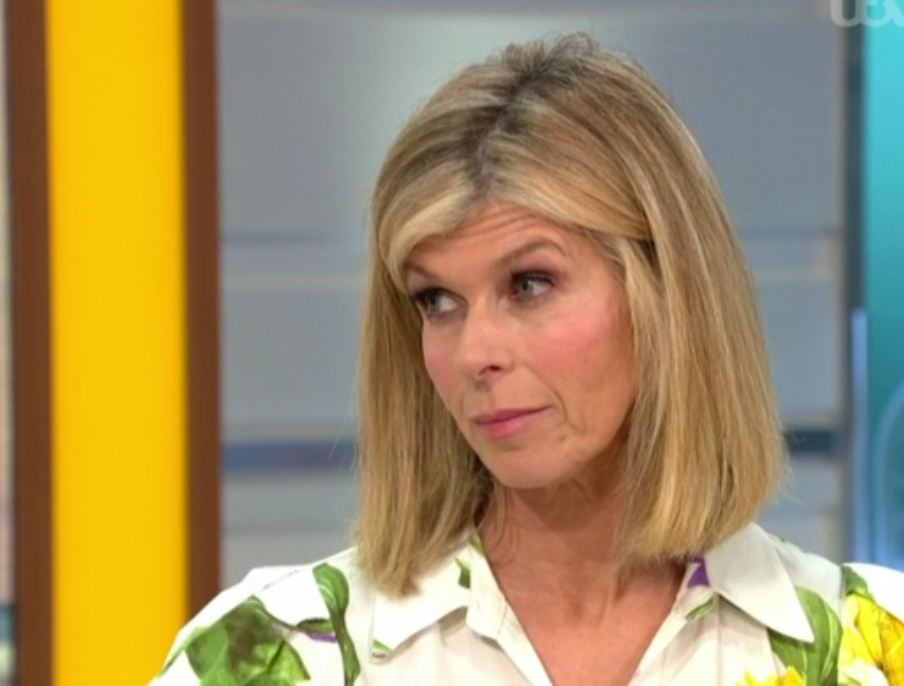 It is now too late to give Derek the treatment because the virus has left his body, leaving him with huge damage to his internal organs.

She and her co-host Adil Ray were joined by Dr Mike Murphy, who is leading the trials, and he told viewers the process is similar to giving blood and it only takes 45 minutes.

He said: "The process is safe and easy and will hopefully make you feel good because you're doing something good for others. You make up the plasma in a few hours, you make up the antibodies in a few hours. We really encourage people to come forward and we're really grateful for you promoting this."

And Kate replied: "I've got to admit I haven't done it yet because I was told no, it wasn't yet part of a trial yet. So I need to do it."

She also updated viewers on Derek's condition, admitting there is hope for his recovery as he is still "stable" in hospital. 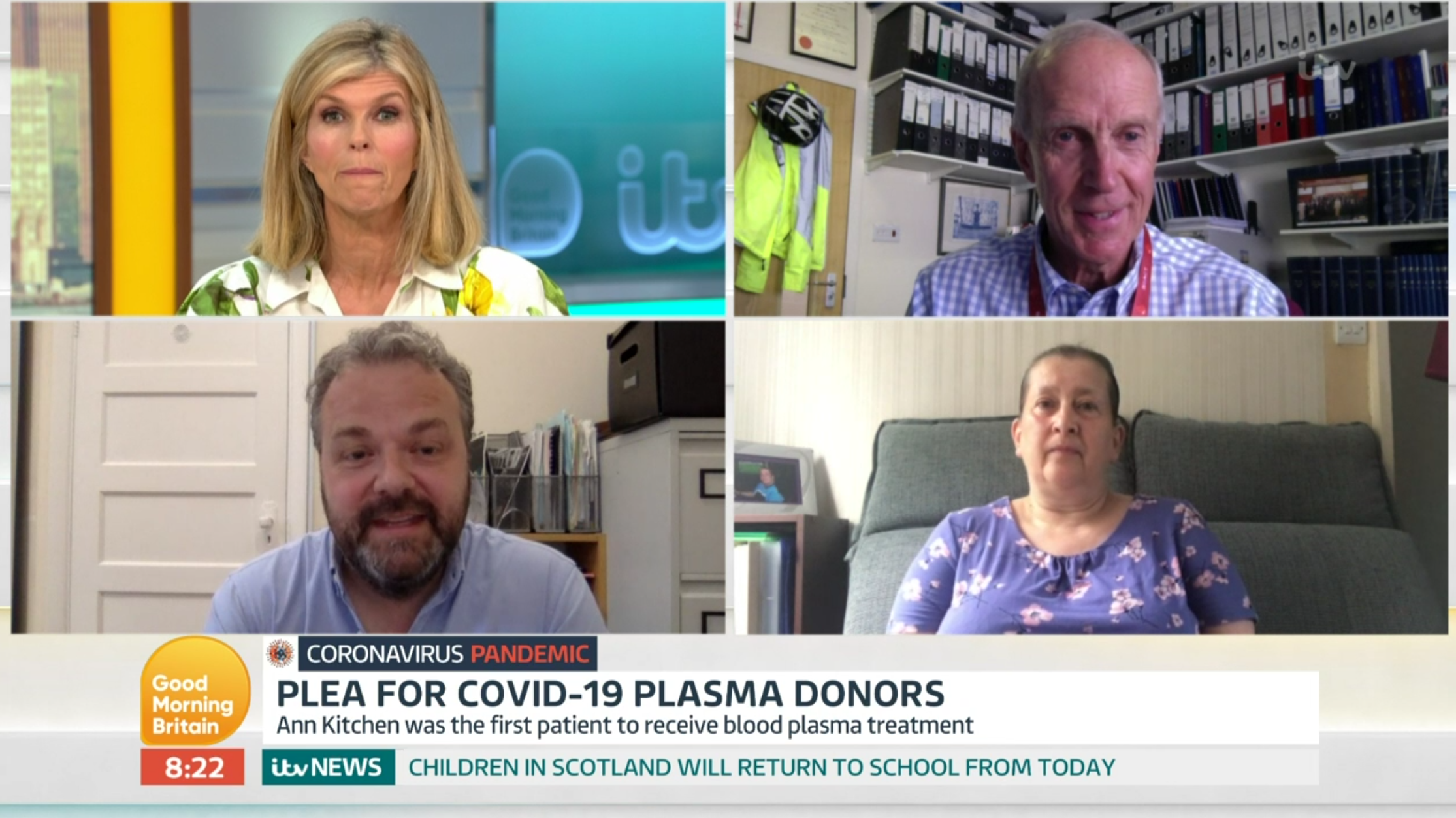 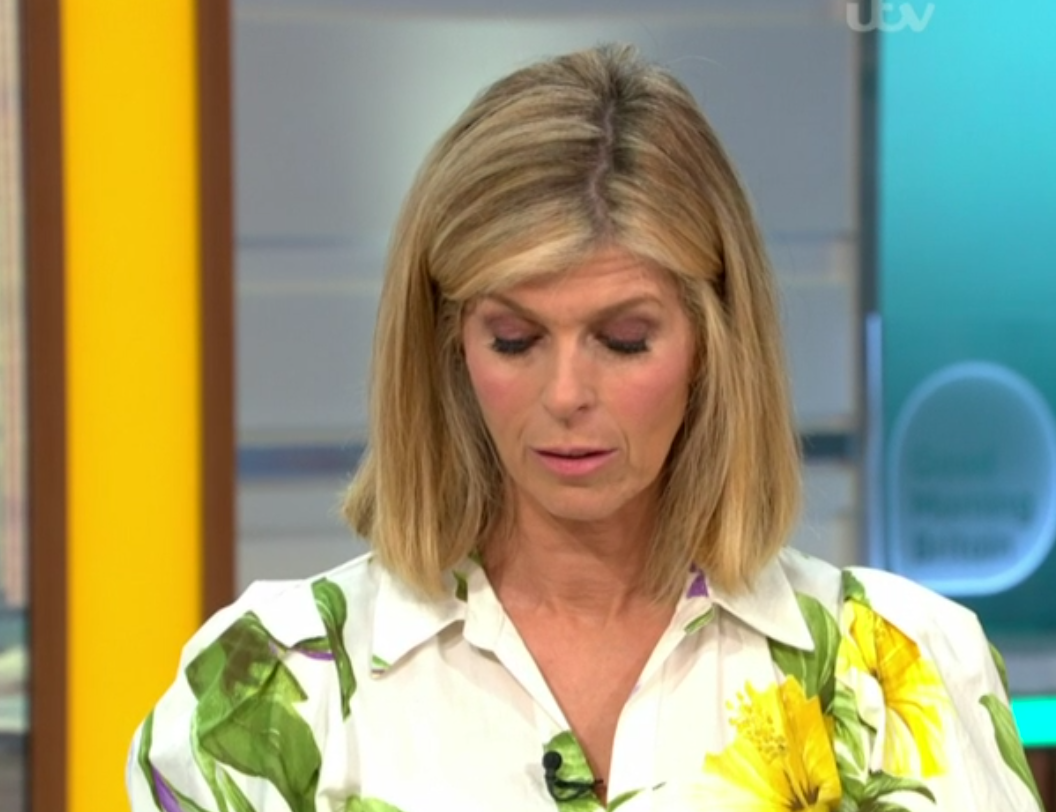 She said: "I feel quite emotional about this because for so long I felt helpless, but the idea that people can come forward and save lives…

"I was talking about it when Derek first got sick. I was desperately researching anything I could do to help as I watched him be consumed by the virus.

"'(I said) what about giving my blood?' and they said 'no because the trials hadn't started.' 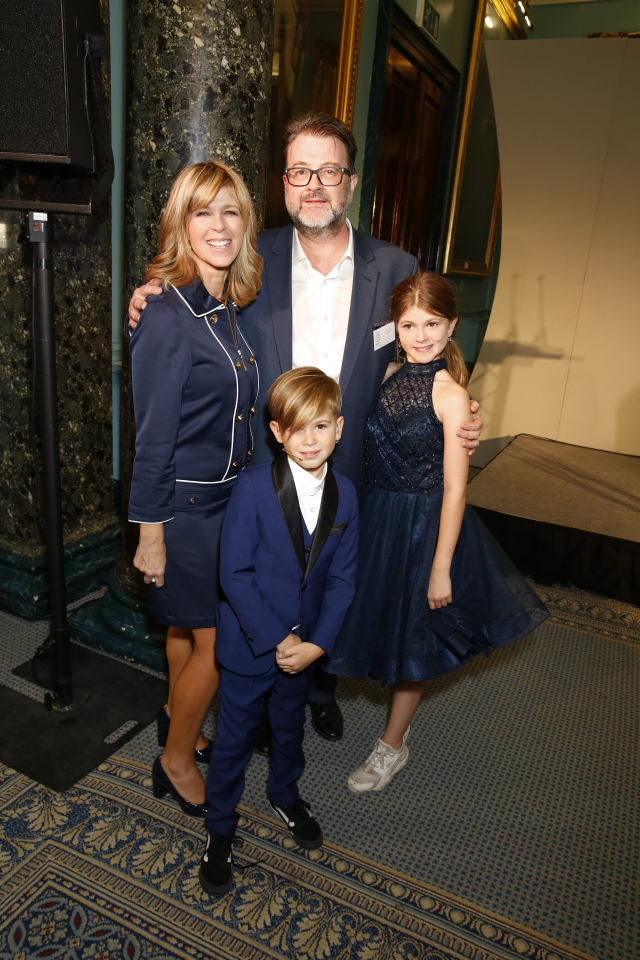 She said: "I'm hoping to see him this week and well, he is stable. And I'm learning that stable is sometimes good. What we want is 'up' days but a 'non down day' is something to celebrate as well. But it doesn't necessarily get easier.

"I better crack on and do it myself now, get involved."

When it comes to the coronavirus, it is classed as an experimental treatment but health organisations around the world are asking for plasma donations. 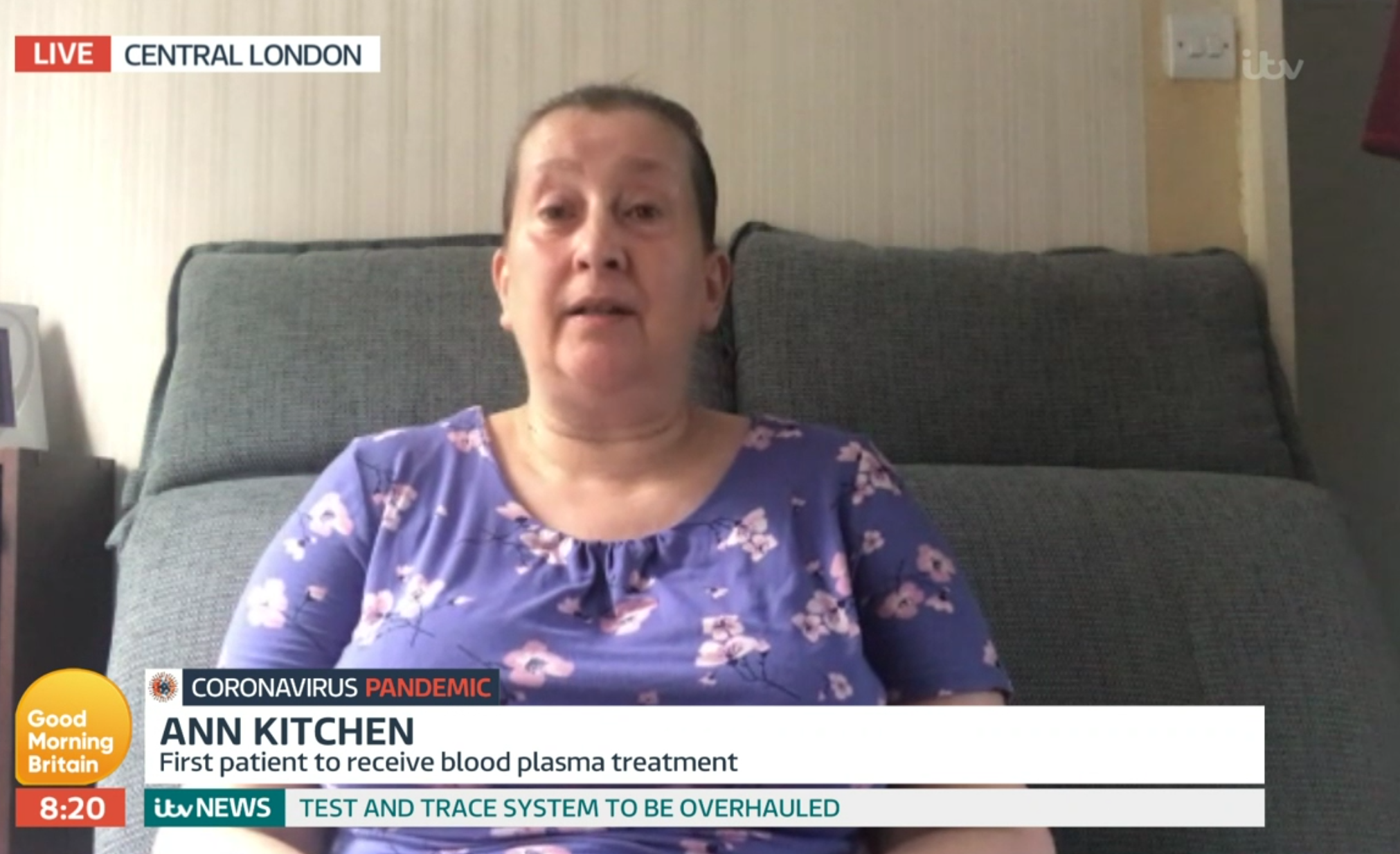 It is hoped the blood from people who have had the disease will help seriously ill people recover or at the very least stop them from getting worse.

Dr Murphy also explained who can donate, telling Kate: "Anybody who has recovered from coronavirus who has recovered in the last 28 days and we want people who have the highest amount of antibodies, men, and people over the age of 35.

"Women who have had symptoms, but no positive tests, may have low levels of antibodies. But we're happy to test.

"Even if you haven't had a positive test but you think you've had the virus you can get in touch."

An NHS Blood and Transplant spokesperson told The Sun Online: “We’re really grateful to Kate and Good Morning Britain for covering donation again today because we urgently need people to donate now, to help during any second wave.

"If you’ve had coronavirus, you could saves lives by donating plasma. You could give the NHS the first treatment which actually attacks the virus. Register to donate at www.nhsbt.nhs.uk.”

What is convalescent plasma therapy?

Plasma is a yellowish liquid that makes up around half of blood volume.

People who have had coronavirus have antibodies in their plasma which might help to combat the disease when injected into someone else suffering from Covid-19.

While plasma therapy has been useful against a range of illnesses over the last 200 years, it is classed as an experimental treatment for coronavirus.

Plasma donation takes around 45minutes and their are donor centres around the country.